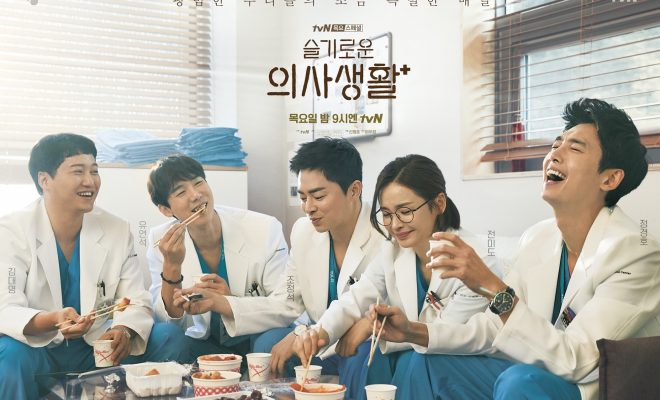 Without concrete conflict, the narrative of five friends who nurtured their bond through the years enlivens with familiarity. Especially for people, who have close friendship forged by time and love. 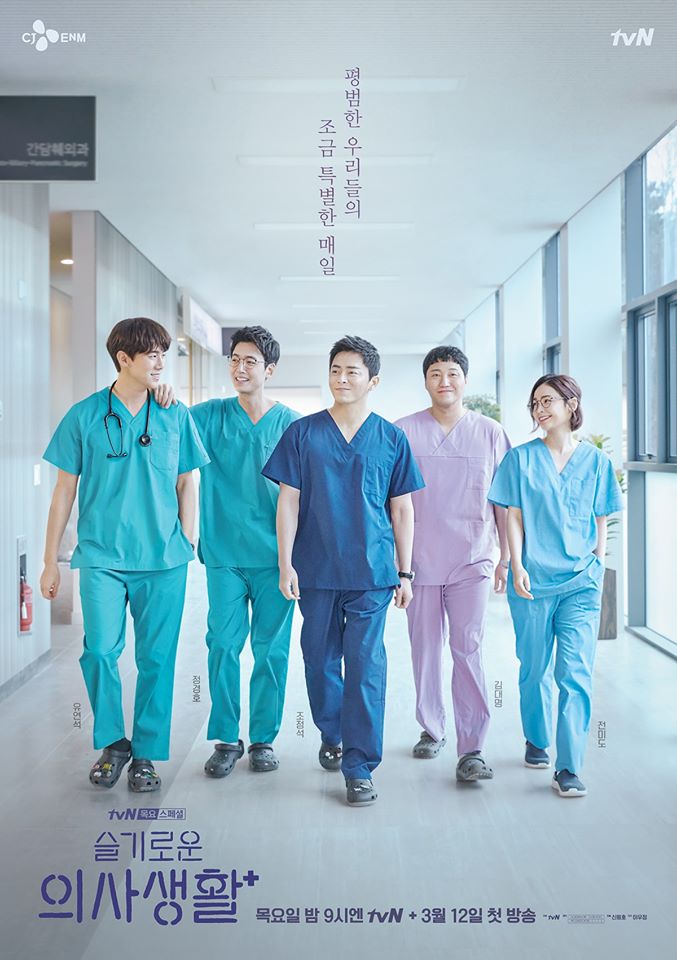 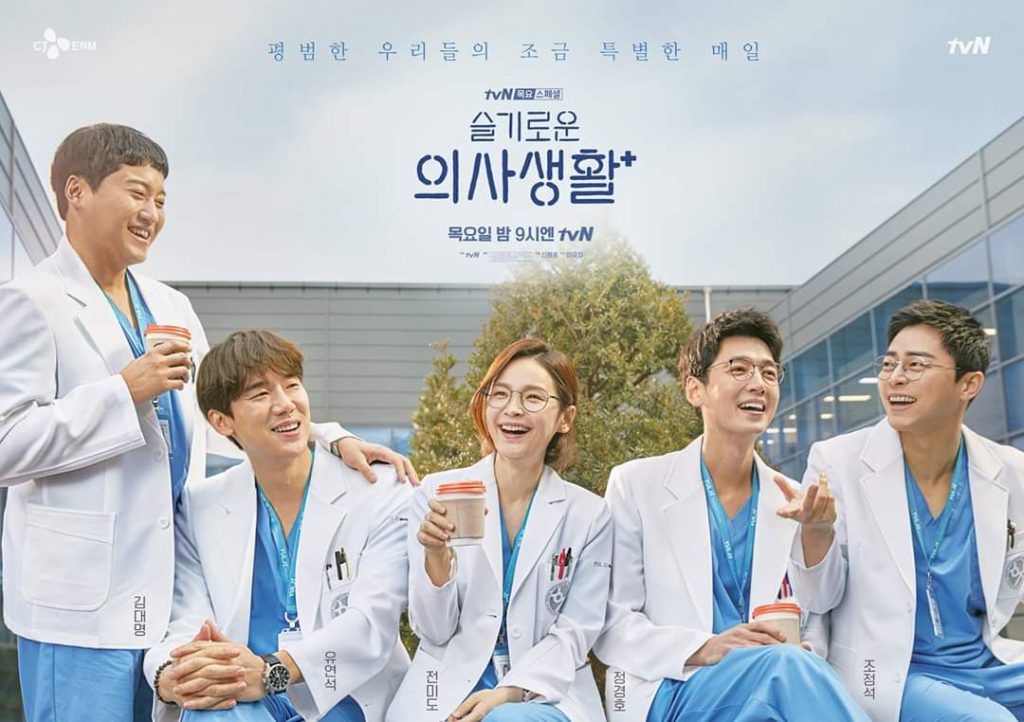 Adding to the bucket of gem dramas Director Shin Won Ho and writer Lee Woo Jung have, Hospital Playlist is a serene treat perfect for career people needing to unwind.

Its smart storytelling reverberates the sound awareness of its creative team to bring a real story about a relationship as pure as romantic ones, but shared by friendship bond. 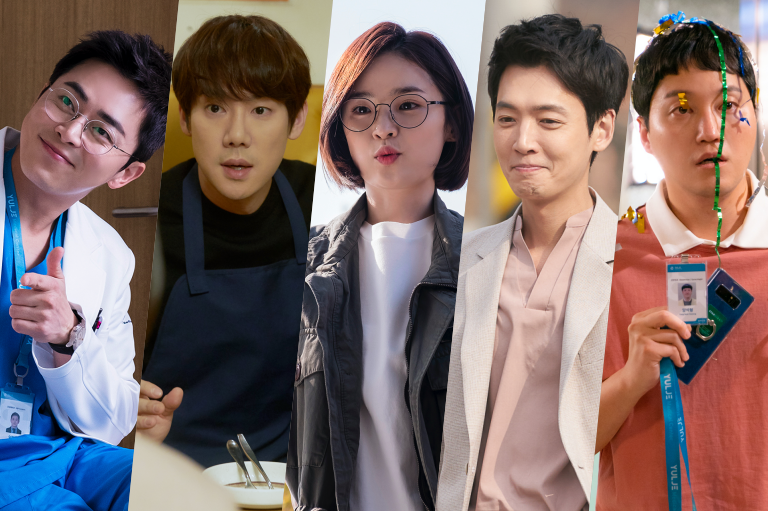 We could not ask for more of what the diligent cast showcased in the series. Hats off to Jo Jung Suk, Yoo Yeon Seok, Jung Kyung Ho, Kim Dae Myung and Jeon Mi Do for decorating a well-contrived friendship story.

Just as the narrative is free spirited and feel good, the five friends cleave to the same tone, like it is specifically made for them. That being said, the chemistry of the lead actors is worth praising. They did not verbalize every emotion, but viewers feel their familiarity like real-life friends on screen.

In particular, the short anecdotes of their friendship when they were young are a delightful watch. It supports the apparent bond they shared as reflected in their eating, drinking and music sessions. 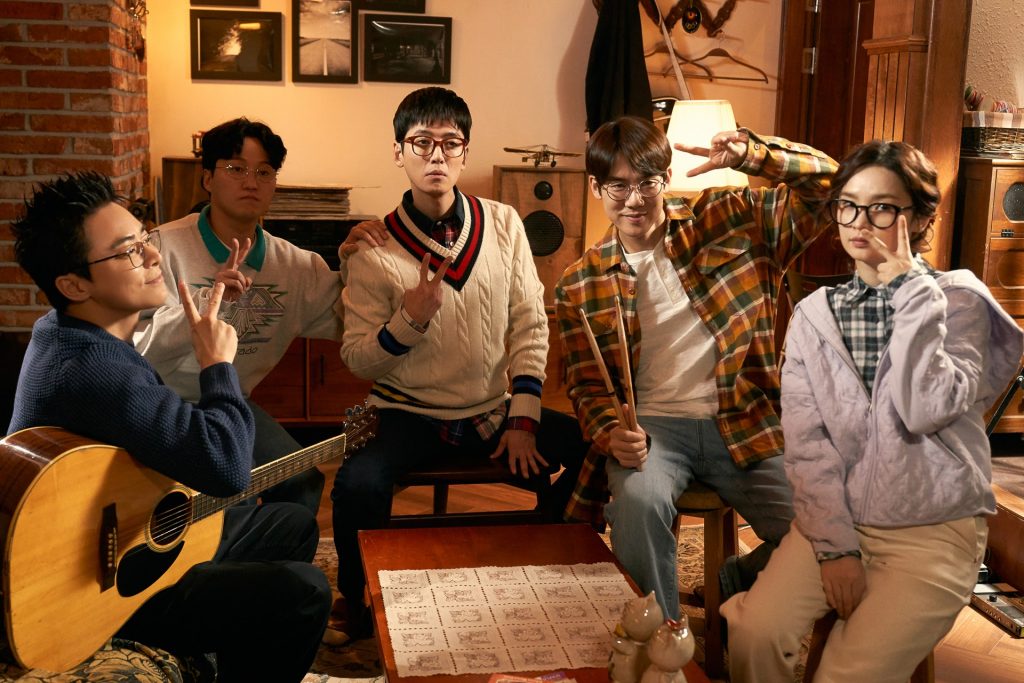 Jeon Mi Do as Songhwa

Often, female viewers get envious with the female lead for the romantic relationship with the male lead, Chae Song Hwa elicits the same. Having four reliable friends who got her back, who cares if she does not secure a romantic love.

Her presence in the group binds and seals the core of their pact. She pictures a woman on top of her career, but does not lose her focus to enjoy life by engaging to her personal hobbies. 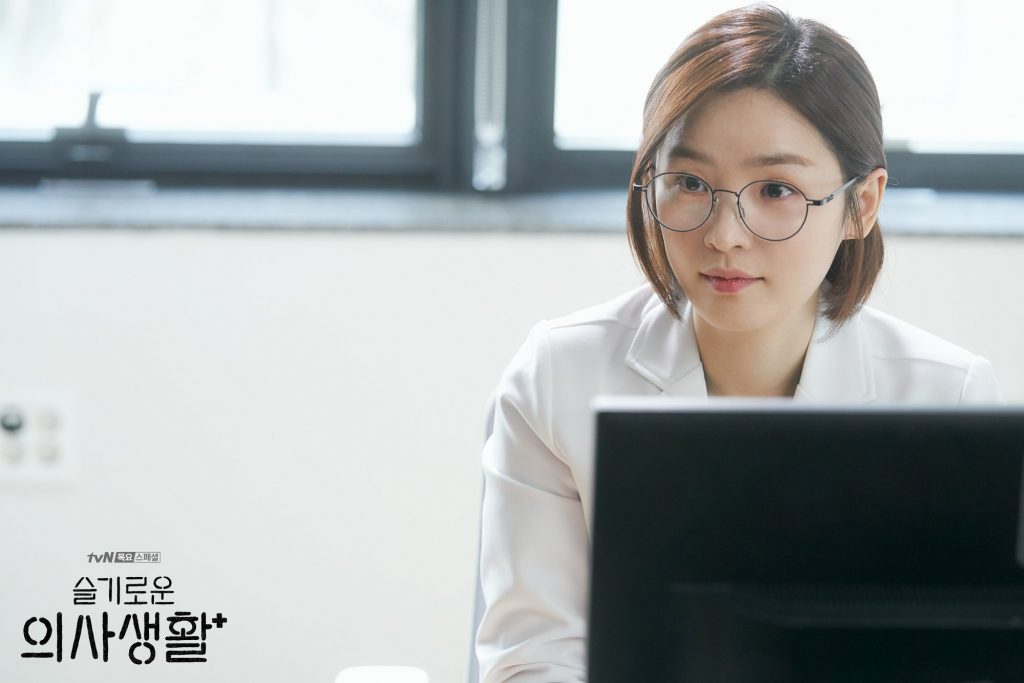 Pouring his zesty spirit, Lee Ik Joon truly is the life of the party in Yulje Medical Center. If Songhwa is the heart, then Ik Joon is the soul of the team. Hesitating to extend his shoulder is not in his vocabulary. He could be playful, but he knows when his comfort and insights are needed by his friends and family. 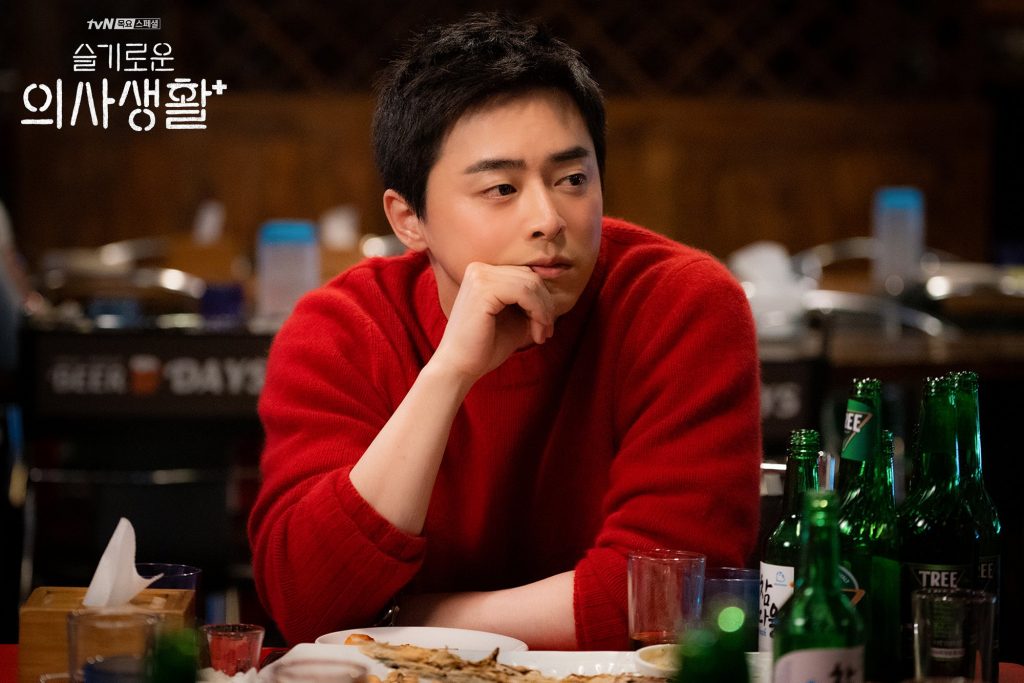 Utterly kind, deeply sympathizing to Jung Won’s mom is expected. An epitome of one-man-Salvation-Army, he is also the perfect poster boy for the kind of husband to score owing to his gentle nature. 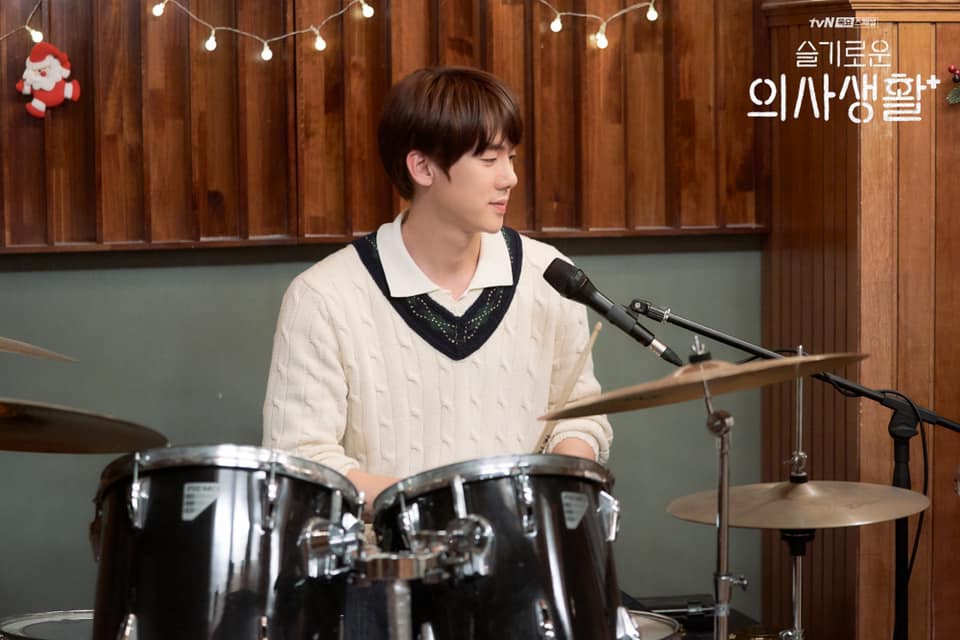 Changing the stigma about “mama’s boy”, Dae Myung is the mastermind of strengthening their bond thru music. He is the perfect picture of the quiet guy in the friendship circle who has the biggest love for the group. 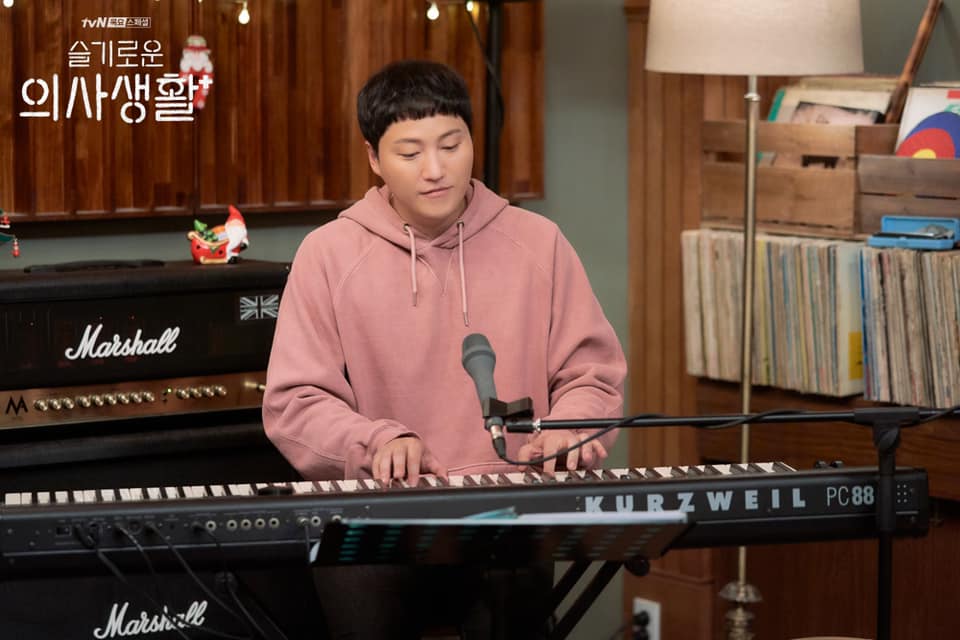 The resident playboy and “cool guy” of the bunch is seemingly inflexible when in truth he is caring. He is almost the perfect representation of an “ideal boyfriend” who supports his woman with enrichment endeavors. 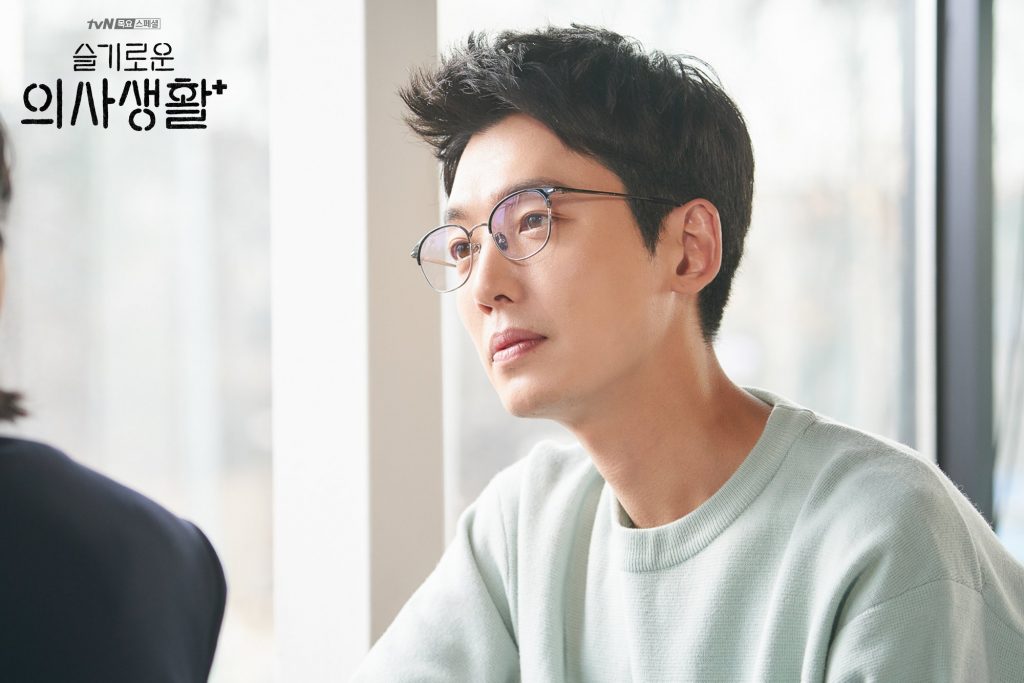 Healing through music and practical life lessons, Hospital Playlist features earworm soundtracks. Since the lyrics also appear in the band session scenes, the meaning of the songs rightfully fit the pictures highlighted.

The band session scenes affirm how regularly doing bonding moments with your friends is necessary and possible no matter how busy you are.

The supporting actors who appeared as staff members of Yulje Medical Center are equally memorable in their respective roles. Choo Min Ha (Ahn Eun Jin) has begun her conquest to win Seok Hyung’s heart. Whether her determination will be favored, we can hope for the best that she can thaw his love apprehensions.

Confronting his feelings toward Song Hwa, Ahn Chi Hong (Kim Jun Han) failed to have his feelings reciprocated. But, he did not dwell on the rejection.

As Joon Hwan’s love interest, Ik Soon (Kwak Sun Young) embodies the perfect woman who successfully tamed the uptight surgeon who used to serial date. The rest of the actors who played as hospital staff members contributed nuanced portrayals no matter how small their parts are. Of course, we won’t miss the adorable Woo Joo (Kim Joon), who captured his on-screen’s dad Ik Joon’s charm like he is really his son. 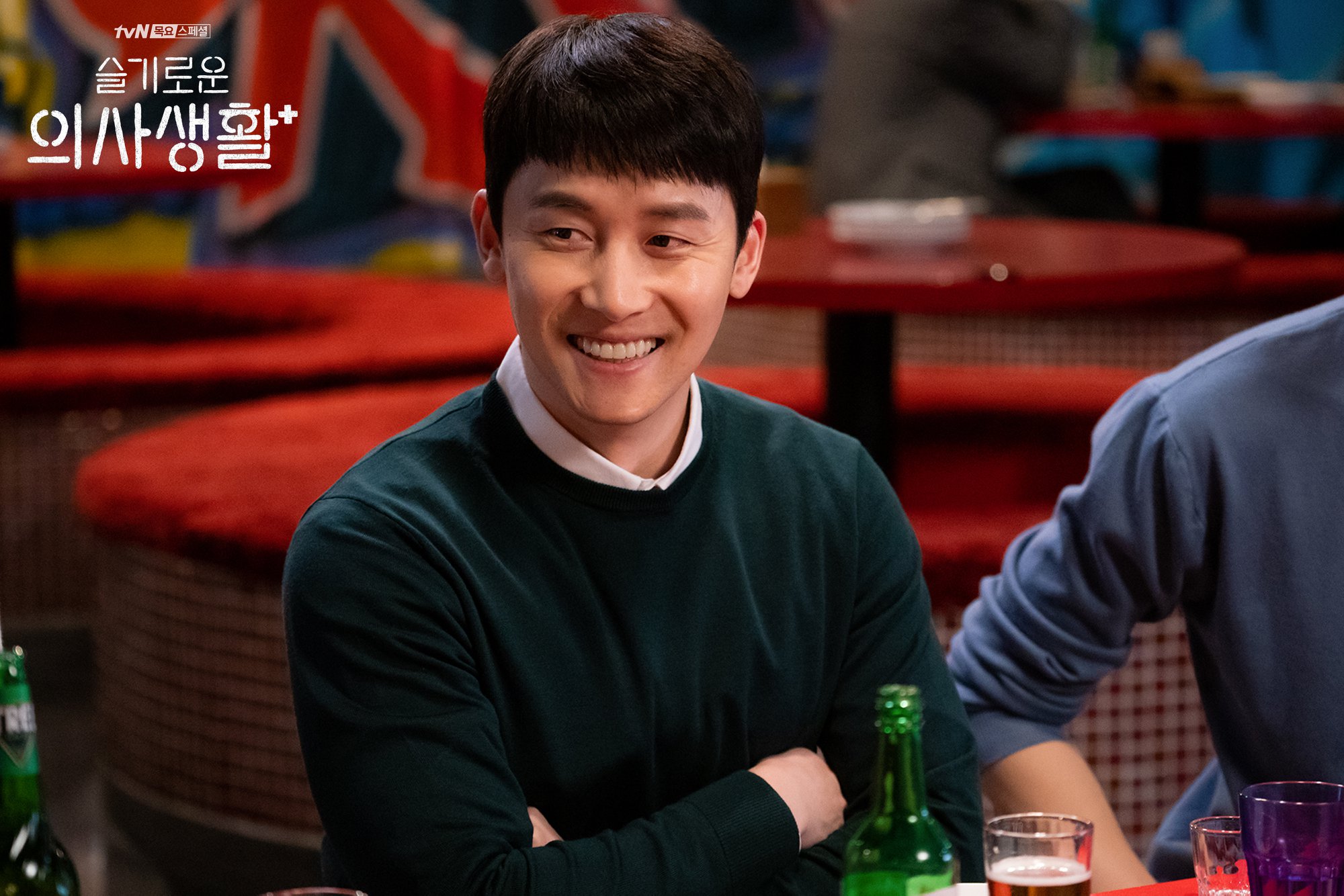 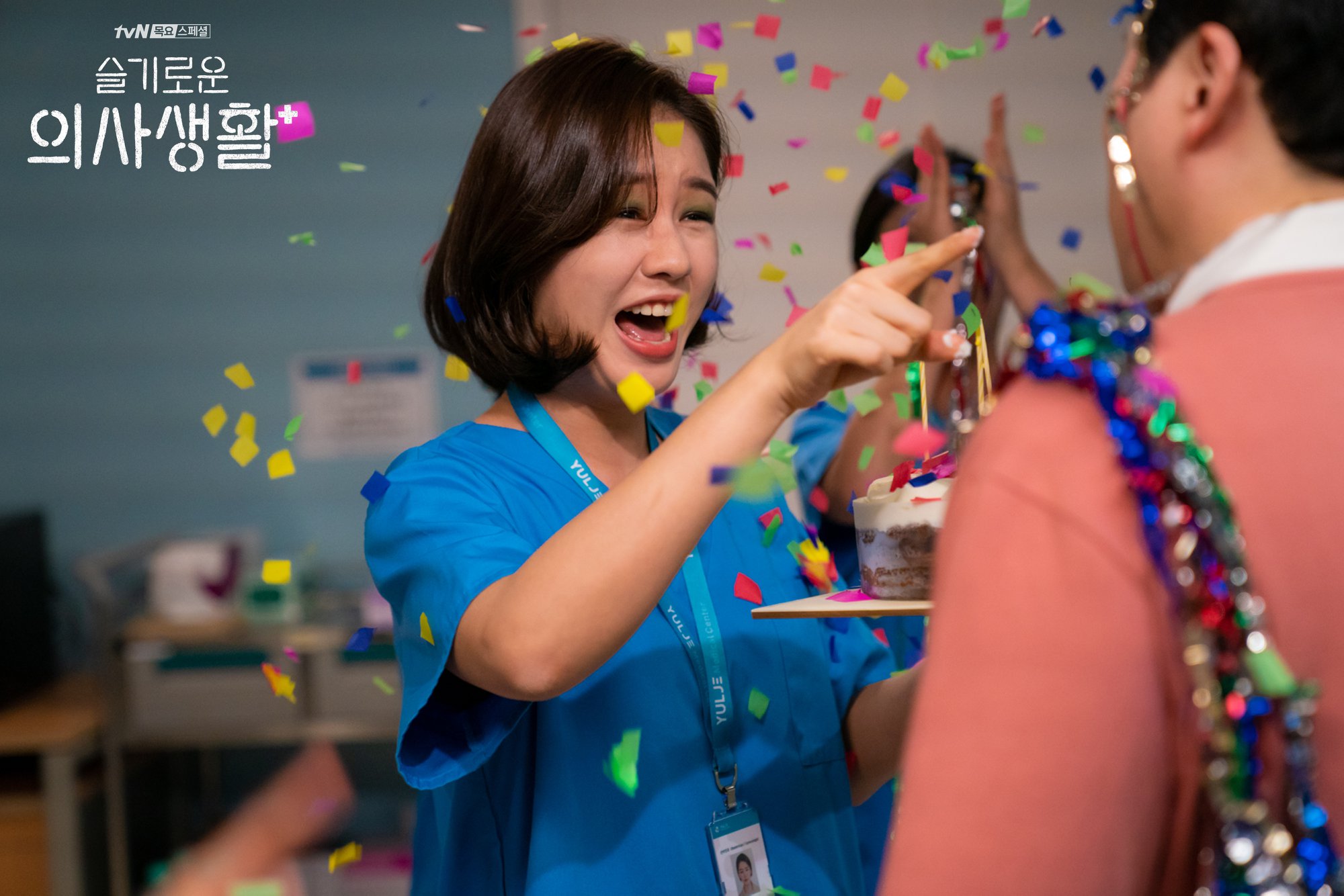 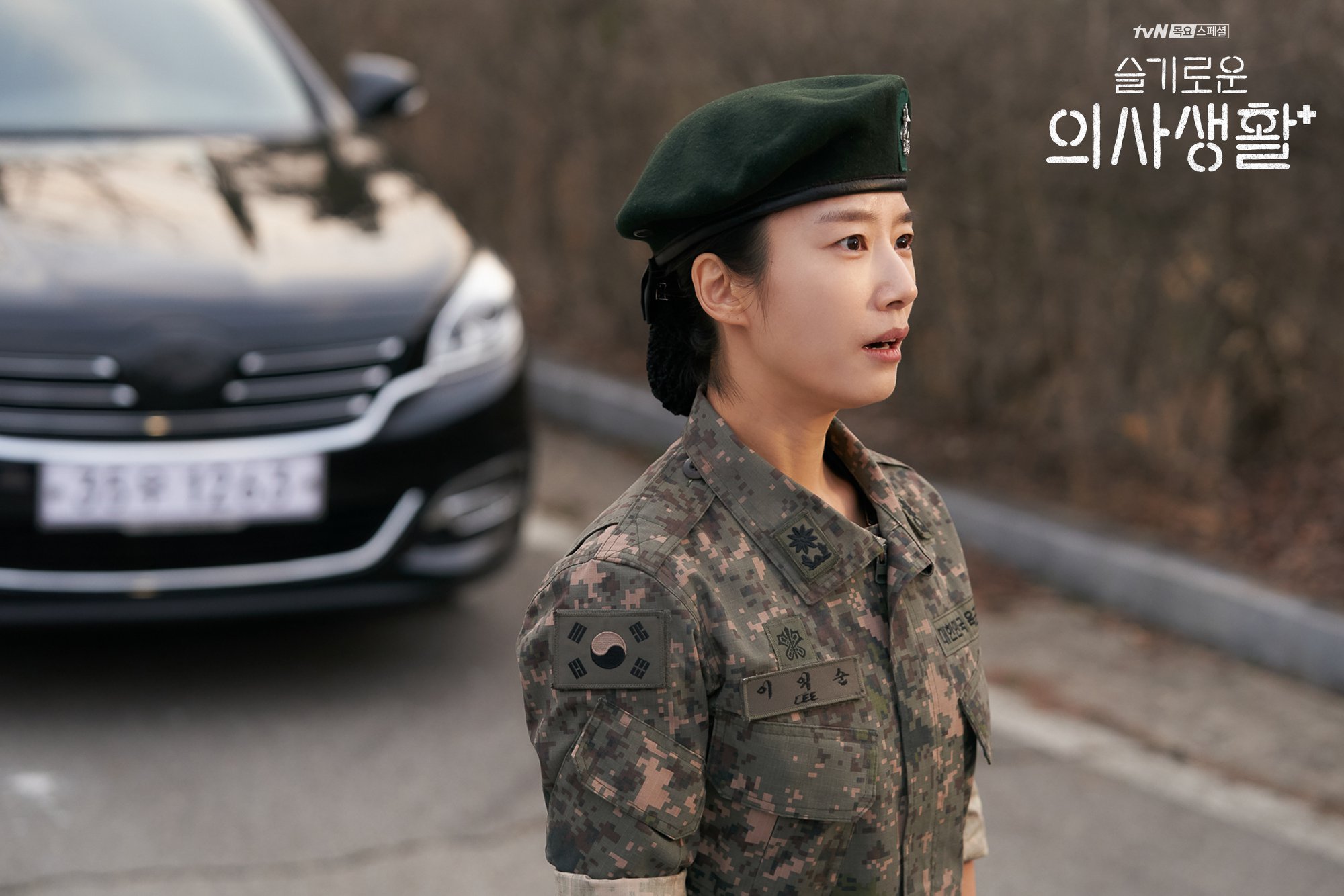 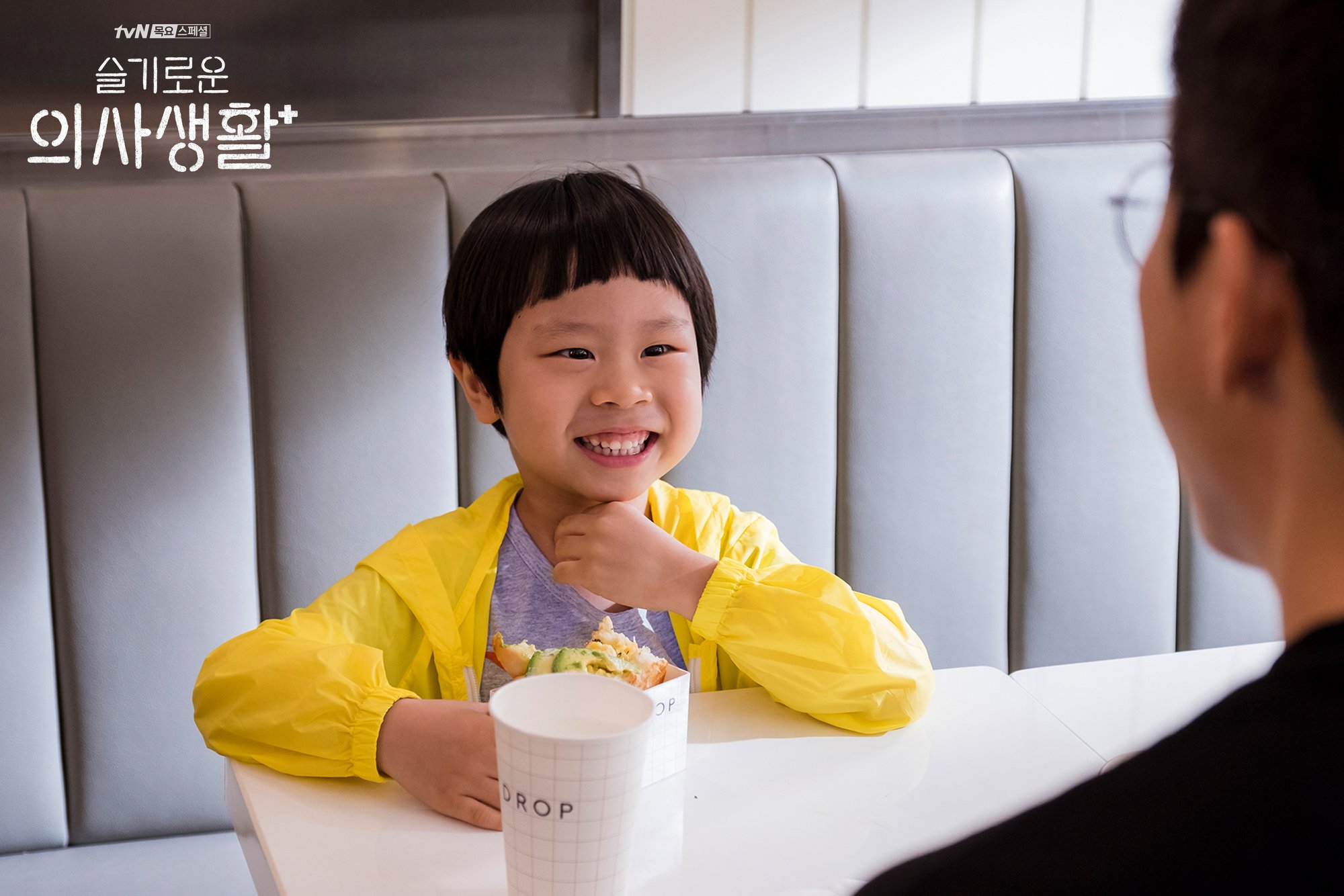 Likewise, the small appearances from patients treated in the series draw lingering impressions of hope and gratitude. A few scenes put the viewer on a weep fest, but the tears are the kind that make you feel good. Especially since there are patient stories that ran from the beginning to the end of the series.

Old characters in medical drama have been infamous for portraying hateful villains. The seasoned actors invited in Hospital Playlist adorably veer away from that notion.

Endearing for her quest to keep her son stay as surgeon, Jung Rosa (Kim Hae Sook) has also induced drama fans to uphold her wish. Her friendly interaction with Joo Jong Soo (Kim Gab Soo) mirrors the same friendship vibe from the five friends. A preview of what they could be in their old age. 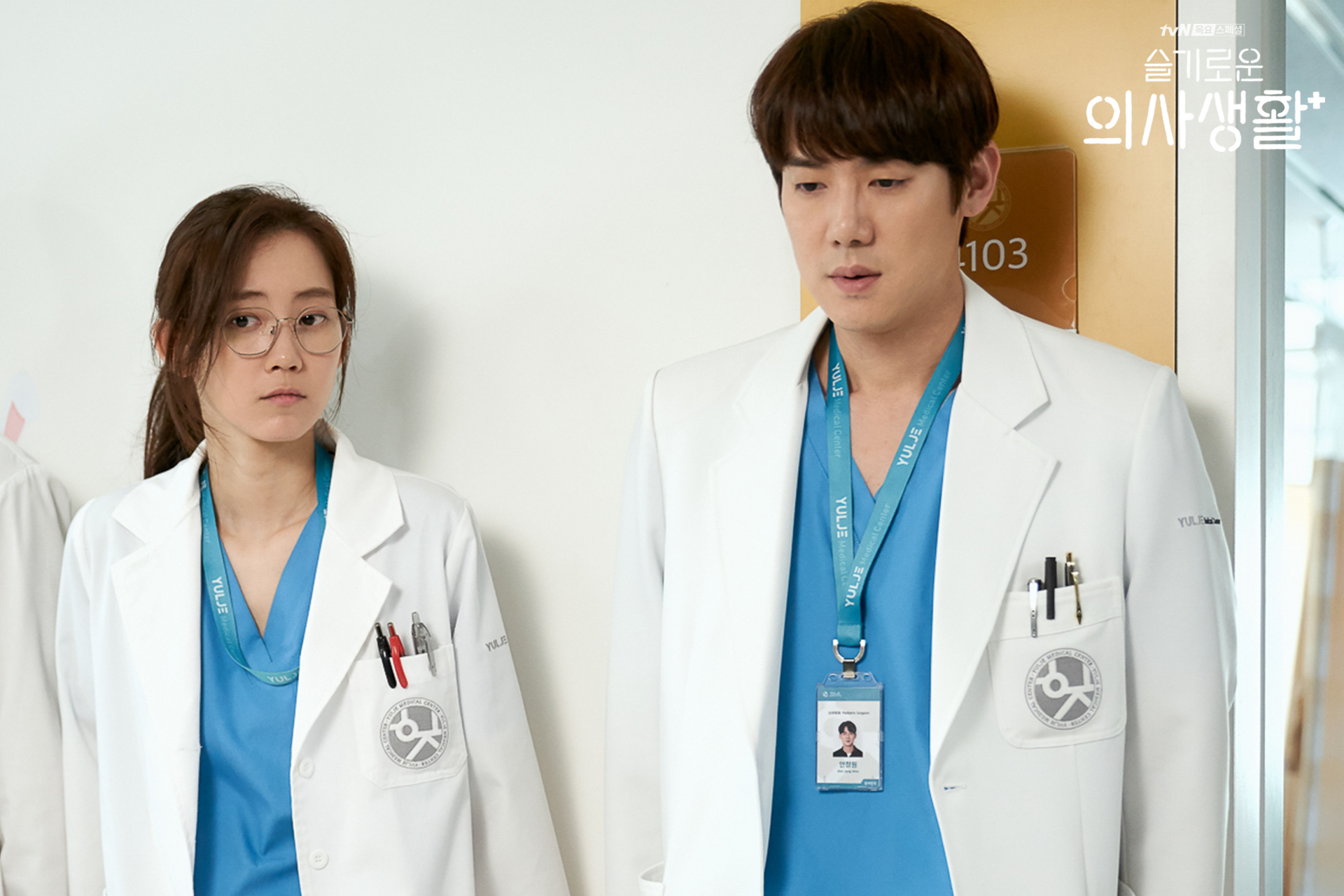 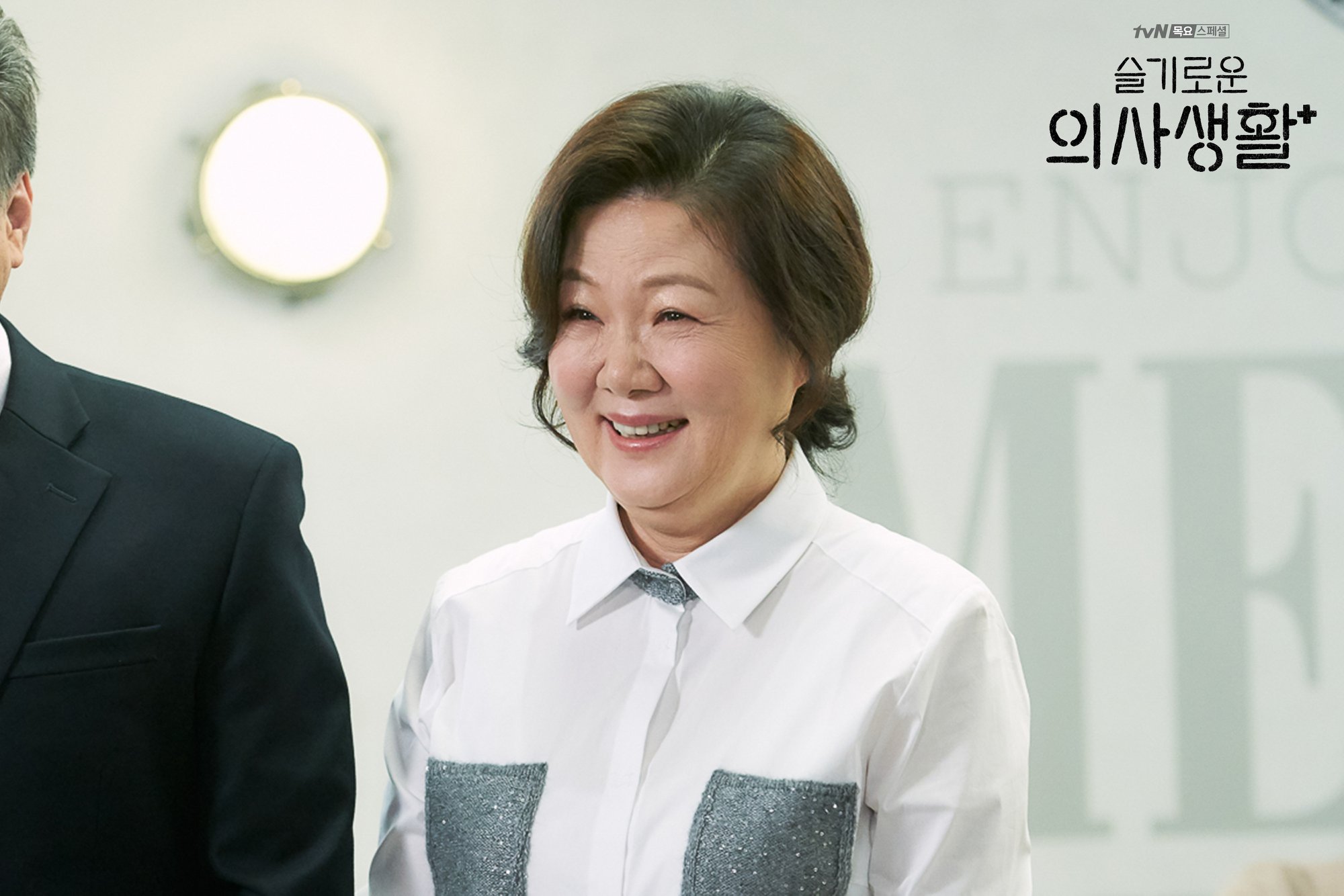 Shin Hyun Bin as Jang Gyeo Wool did a superb job for her role. She encouraged all those with one-sided love affair to not give up when their intentions are pure and genuine.

Her heartfelt confession to Jung Hwan to stay by her side instead of committing his life to God probably propelled support banners from fans watching the finale episode. Because, who wouldn’t support her to claim the love she deserved?

Without question, the one and only hardworking resident of General Surgery warrants a happy ending.

Do Jae Hak’s picture of perseverance

Portraying the role of diligent chief resident, Jung Moon Sung made a few standout comic and emotional moments. That particular scene when he confessed he had to beg the patient to do an urgent procedure taking Jun Hwan’s instruction to use his IQ, EQ, vocabulary and superpower to save the patient loops in the mind.

The scene of him getting a thank you note from the patient for not giving up on him generates a profound message about doctor’s fulfillment in the course they take. 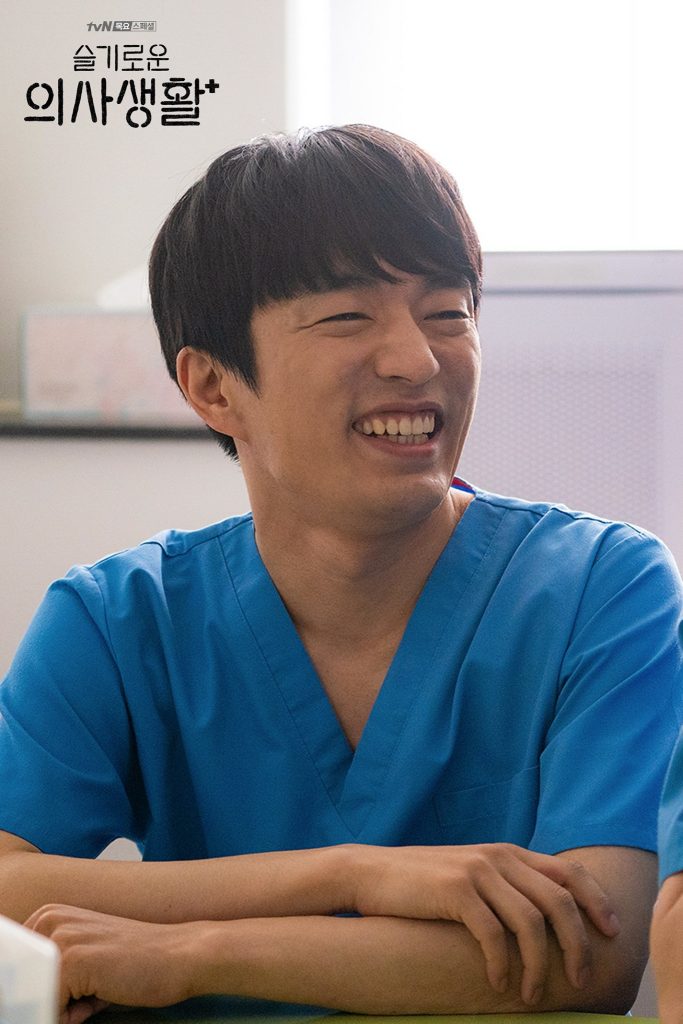 Seeing the familiar faces from the production team’s old drama characters brings smile to fans of the creative tandem. Characters from Reply series and Prison Playbook made a quick but striking stop to bring additional zest to the series.

Heartening Messages on Life and Love

Hospital Playlist is a treasure trove of inspiring messages. Albeit focusing on adults in 40-ish, youth can also learn a lot from the series.

“I got divorced because my wife cheated on me. I worked at the hospital all day and looked after my son alone. I really lived hard but she had an affair with her friend’s husband.

At first, it hurt my pride and I was embarrassed to meet people. I wondered why my life was getting so difficult. It was really tough. But all of a sudden one day, I realized how much time I was wasting.

Wasting away my life like that because of what she did to me was being unkind to myself.”

“Do you know why doctors only give vague answers such as ‘We can’t be sure yet,’ ‘We don’t know yet,’ and ‘We need to observe a but more’.

Doctors must take responsibility for their words. So we must be careful with our words. There’s only one thing we, doctors, can tell our patients with certainty. ‘We will do our best.'”

“I did it. I begged him. I kneeled and begged. I racked my brain, but I couldn’t think of anything else. So I kneeled in front of him and begged.

I begged him to get an enema so I don’t get fired.” 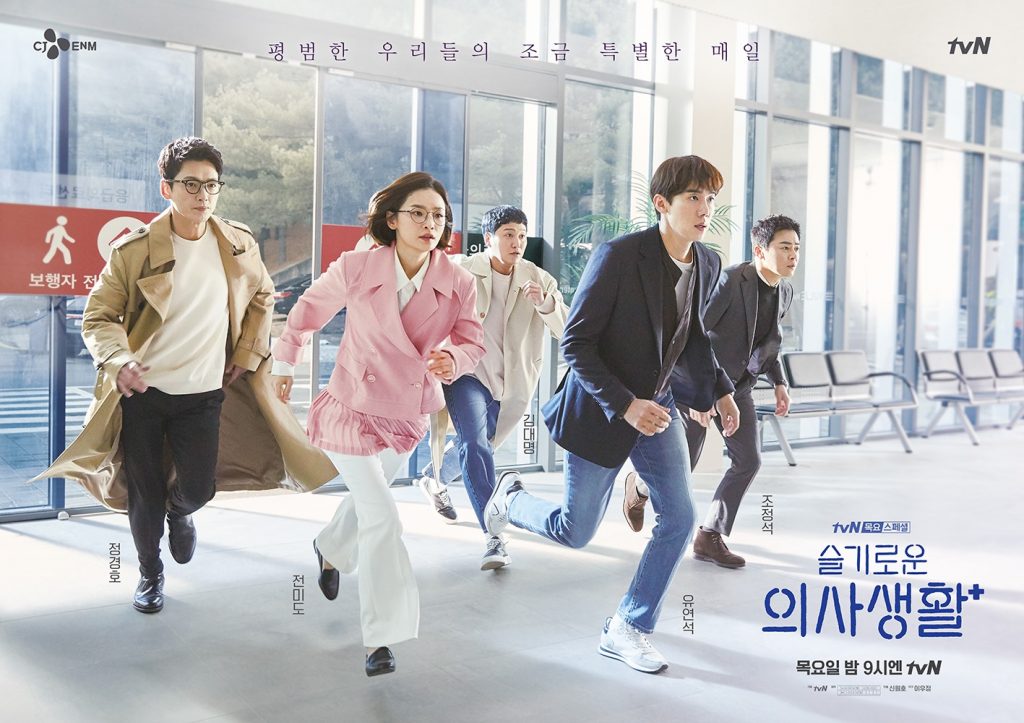 Hospital Playlist evokes warmth that easily finds the viewer’s heart. Hitting all the rules of a deftly limned healing story, it convincingly demonstrates that in lieu of circling agonizing conflicts, a familiar story that everyone can relate to would suffice.

Stories that fascinate without yielding negative elements is deemed remarkable. After all, it is hard to capture the narrative’s emotion without relying on a conflict.

It’s amazing how the series laid its foundation without having to worry about the problems to be resolved. It just happily created a storytelling that inspires and heartens.

Admirably, the series sealed its exquisite storytelling with a finale episode that resolved the main leads’ personal predicaments. It also hints on what to expect in the next season as some problems need a second chapter to have a clearer picture.

Flaunting an array of sweet subplots, the love stories painted in the series take a pragmatic route, but spirals to endearing bliss nonetheless. 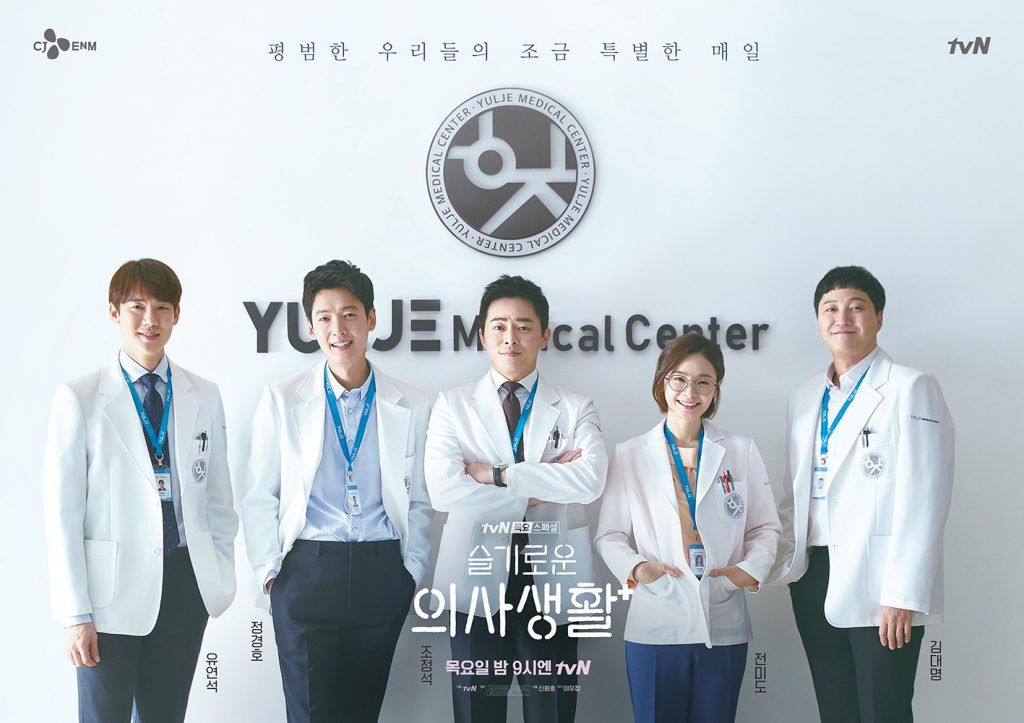 Hospital Playlist is a kind of drama that you watch on a weekend to relive work stress for the whole week. Therapeutic and smartly-written, it leaves a lingering positive imprint after every episode dose you take.

Definitely one of the best Korean dramas that aired this season. Its story and character portrayals are polished without being predictable.