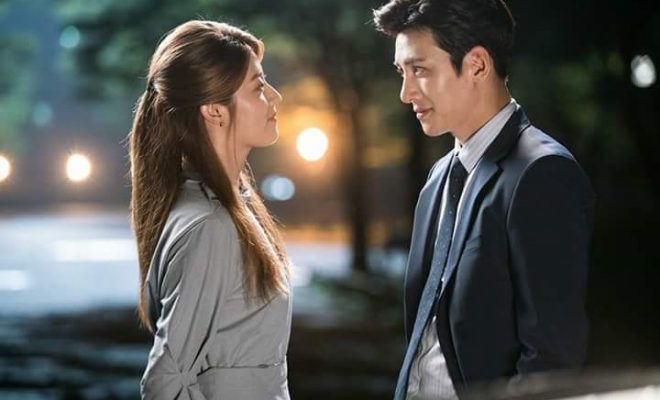 Romance in a legal world setting spurs the romantic ride of Suspicious Partner. 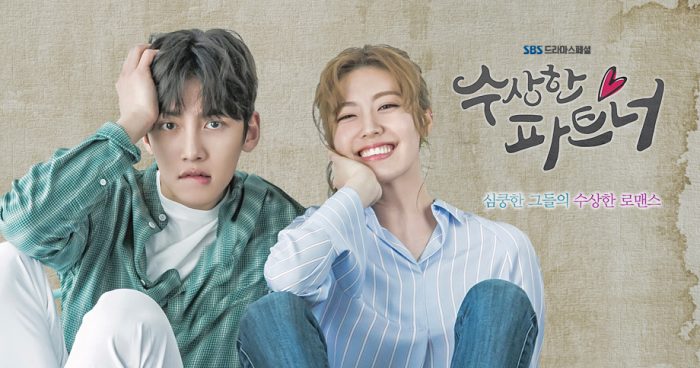 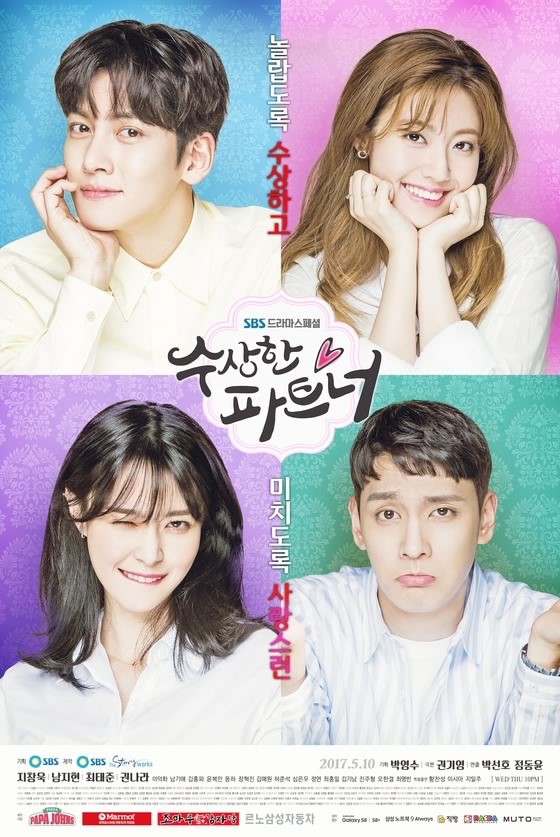 As a Ji Chang Wook fan, I suffered a rebellious jealousy while watching Suspicious Partner.  *grins  When it got to the sweet kiss scenes where he glided his lips luxuriously on his lead girl, I squealed along with all the girls around the world, but I slept with tears in my eyes. *lol

So when he went to giving her morning kisses as the story progressed, I rested my case, and decided to cool off my one-sided fictional romance with him. *giggles

On that note, Suspicious Partner soared up on how the romance inevitably happened between a man and a woman, who found themselves trusting each other.  The love declarations are impulsive outburst, which gives a relatable nudge for people, who at some point in their lives, recklessly chase a relationship that just beat excitedly in their hearts. 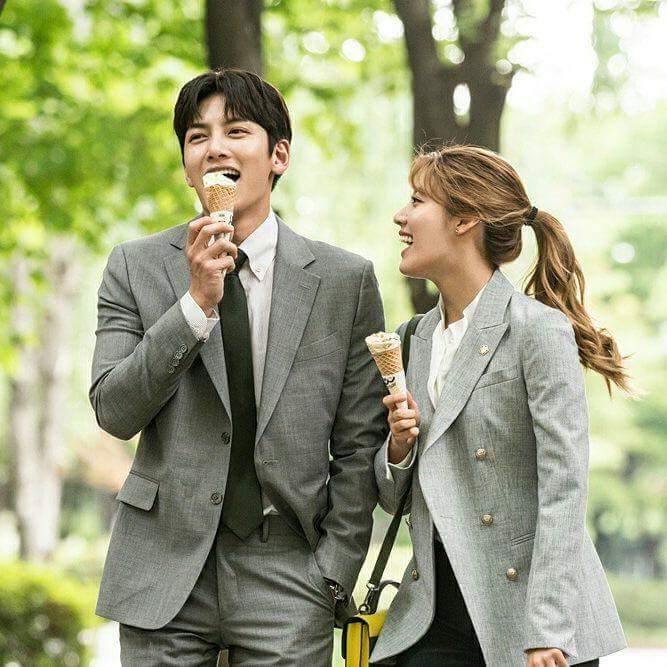 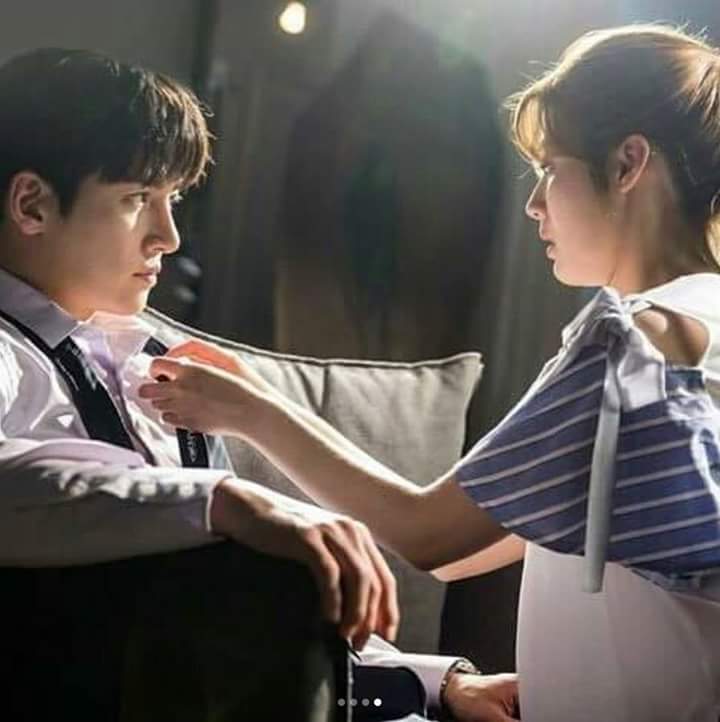 As I was not drawn much in the contention laden legal drama premise, I focus my attention to the best feature of Suspicious Partner.  True, it is a conventional love ride. The kind that I have seen already from other rom-coms over the years, but it is the handling of the main leads portrayals that help me a lot in enjoying their romance.

I felt Bong Hee’s pain and desperation from her “rescue me” stage to her “love me” declaration to Ji. Then I move to “it serves you right” moment on Ji’s “I’m-sorry-I-was-scared-to-admit-that-I-love-you-too” counter love declaration.

When I thought I could finally send the two lovebirds off, I got frustrated over how their parents’ deaths warranted a valid breakup reason.  It was a whirlwind of emotional love drive, but thanks to their rationally trained minds, they did not waste their time, dwelling on unreasonable predicaments which they did not have control over with in the first place.  In the end, they followed their hearts to be with each other’s arms. 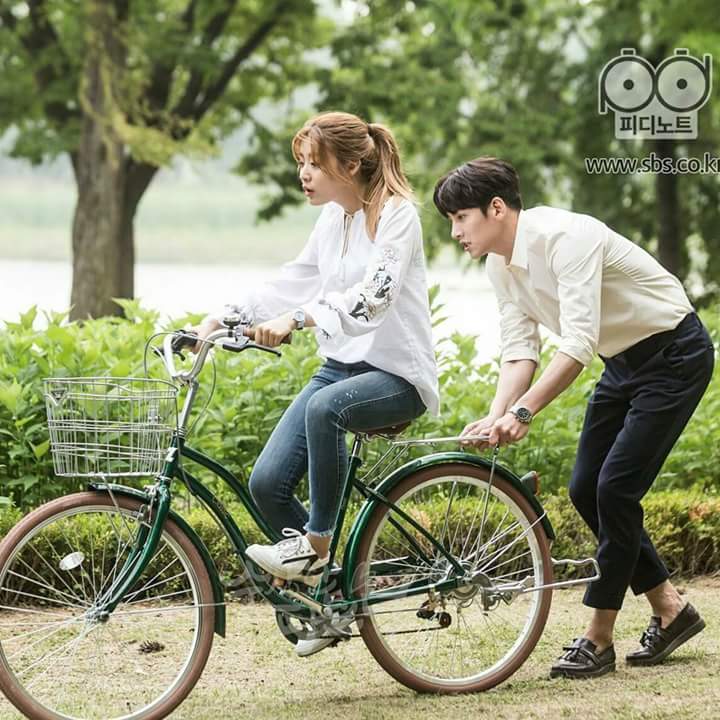 The prosecutor and lawyer ensembles delineate the narrative well by contriving efficiently their roles in the story.  The bickering staff, who work together in convicting the psycho villain, have spotlight moments that help in recognizing their functioning roles in the chronicle.

The bromance is not that solid but the girls, who acted like normal mood swing operated girls, project a love-hate relationship, following their fickle nature that is enjoyable to watch.  There is no wallpaper character.  Even the grandpa who says lame jokes and lines seasoned the cast interaction well. 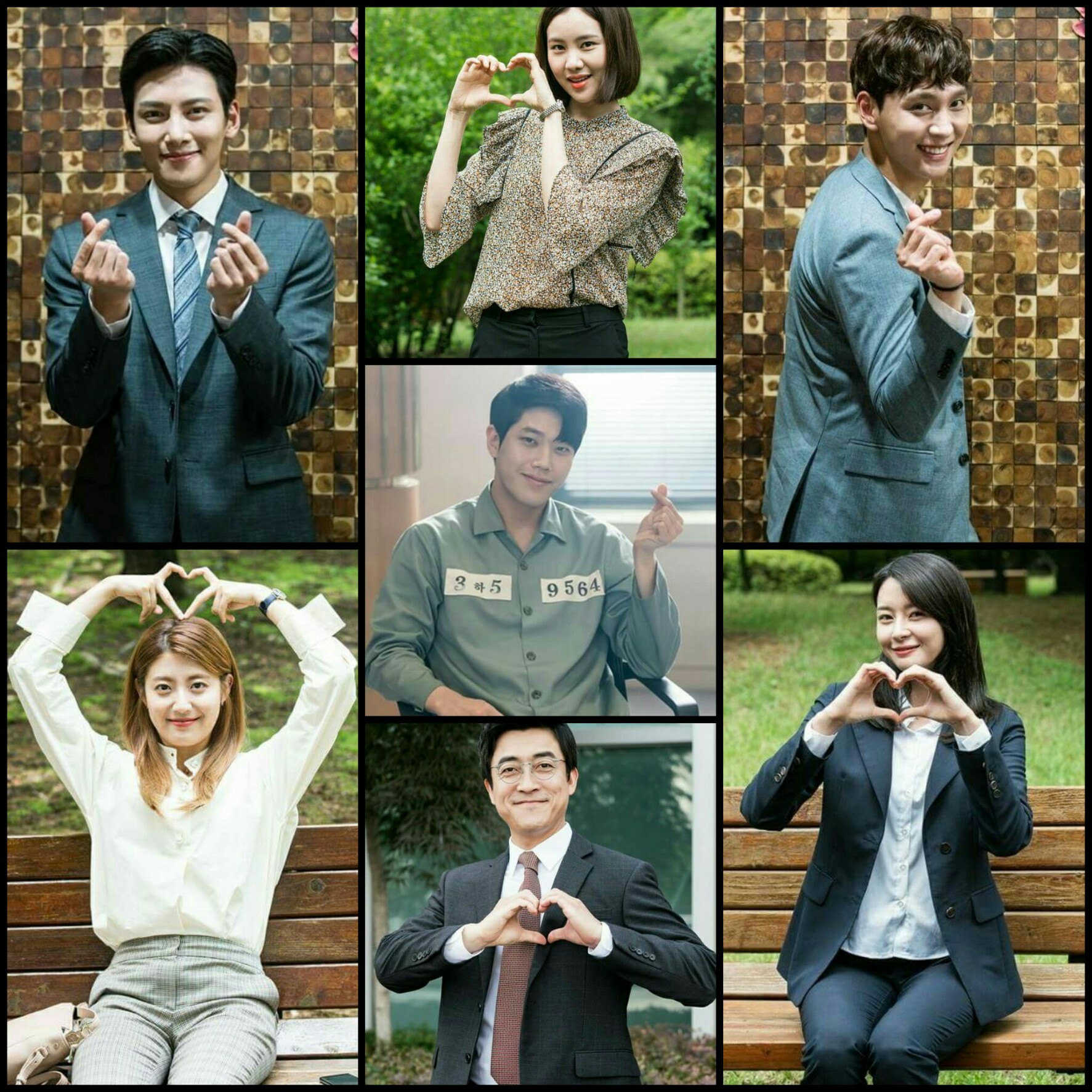 I have slight issues on Nam Ji Hyun’s portrayal because I still see a bit of Bok Shil in her Shopping King Louis stint. While she is strong on the emotional scenes, the casual scenes tend to be dry. But she makes it up with her being responsive in the liplock frames.  Too responsive if I may say – that I was in an “oppa nooooo!” “oppa stoooopppp!” fangirl breakdown madness.  *chuckles

Those sigh-and-scream inducing kiss scenes are the best so far for 2017.  The main love couple just go heads on in those heart fluttering moments without reservations.

It is so that the audience end up basking in the fictional love moment they are having. The music contributes a lot in making the romantic scenes momentous.  It kinda sets the viewers on a trance while watching the lead couple graze each other’s lips. 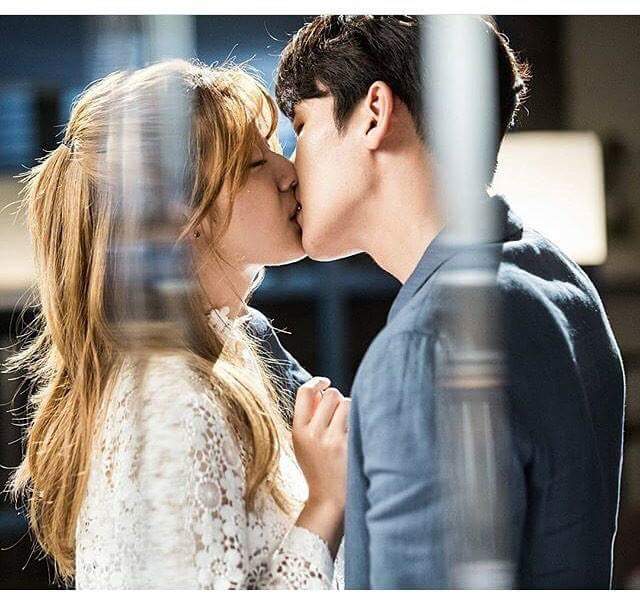 It will be hard to give the Best Villain Award, given the strong antagonists that paraded this year.  Jung Hyun Soo presents the remorseless type of villain, who justifies his evil doings on the basis that he kills wicked people only.

His vindictive nature and clever mind tests Prosecutor No’s resilience in defeating his purpose. I wince at his combined ego and atrocity, but his screen presence supplies the needed help in breaking those times when the narrative is feeble. 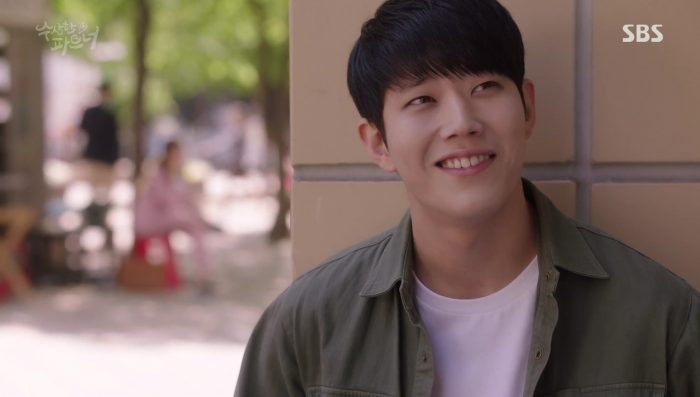 The waning episodes resolve the long running conflict against the unrelenting murderer through a poignant courtroom episode, where Prosecutor No lures the defendant in revealing his misdeed. By provoking his psyche, they finally seal the crime that he has to pay.

Suspicious Partner fluctuates to a languid tone every time it shifts to the criminal chase. The villain portrayal is there, but the impetus to his actions is not well-established. Thankfully, the nicely done closing chapters redeem the messy gaps along the way. 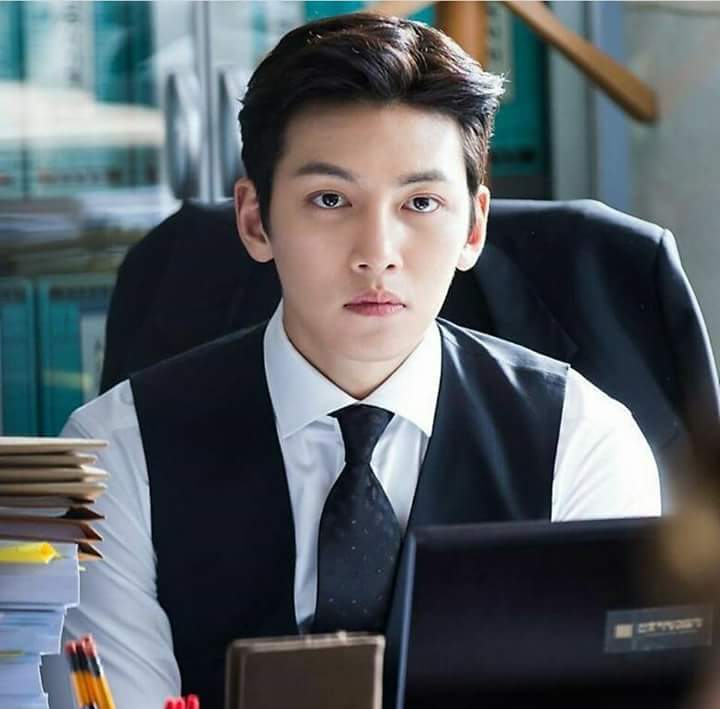 Suspicious Partner notches a few K-Drama foreseen tropes.  Amnesia, jumping into wrong conclusion, intertwining fate for the lead couple, and the list goes on.  The hints inserted as the plot thickens can easily be connected to where the story is heading.

The story lags midway as the villain proceeds with his power game. Then it takes on the psycho trial problem simultaneously with the you-and-me-against-your-father-who-killed-my-parents supposed conflict.

The writing has the right intention in presenting the whole picture, but it falls behind in terms of proper sequencing of the story curves. 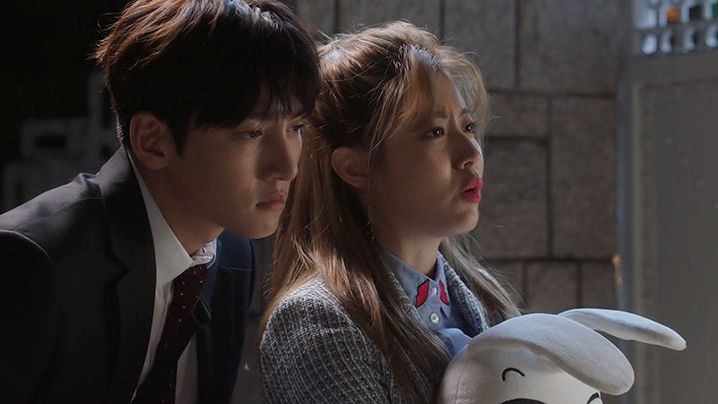 I’ve seen a lot of legal drama with psychopath characters. That is why it baffles me why I never flinch on the supposed gripping note of the narrative.

Yes, the villain is deviously apt, but it is the lack of convincing cliff-hangers that turn the story less creepy and exciting for me. To be honest, I was even at a point where I understood how the villain arrived at that impossibly evil state.

Had they make the anti-hero ruthless to the bone, it would have made a difference.  Because then, it will be easy to hate him.

It could be because the actor gave an impressive conflicted picture of a young man, who wants to avenge the death of his first love that was gang raped by his friends, or just really the lack of cringe worthy side stories.

The proper blend of the psychotic outrage and romance by neat storytelling is what Suspicious Partner has unfortunately missed. 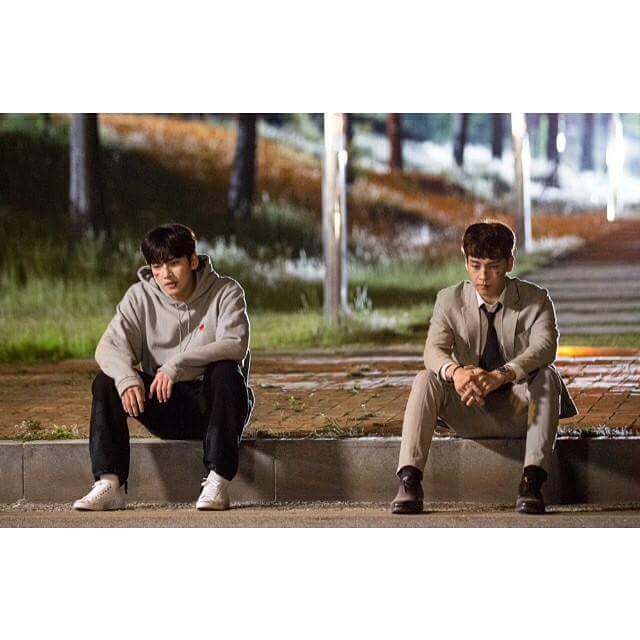 Heading to his military service, Ji Chang Wook oppa made sure to gift his fans with a drama they can watch when they miss him.  While I tend to anticipate his daredevil moves, he sticks to his brainy persona, and is a chock full of delights on the rom-com scenarios.

Suspicious Partner lacks writing confidence. It is easy to read what will happen next. The storyline is, most of the time, preoccupied in establishing arcs and bends without finishing the existing side conflicts that were just introduced.

Nevertheless, it is the right amount of bubbly main cast that sustained the dragging and tiring parts of the narrative.

While it is not as addictive as the romcom drama favorites, the charming love couple is keen in displaying a delightful relationship to hook back the attention, when the unfolding of events starts circling.

The fan service is noticeable, albeit the inconsistencies of the writing.  Considering there is not much remarkable romcom drama for 2017, I say Suspicious Partner is still worth your weekend drama binge. 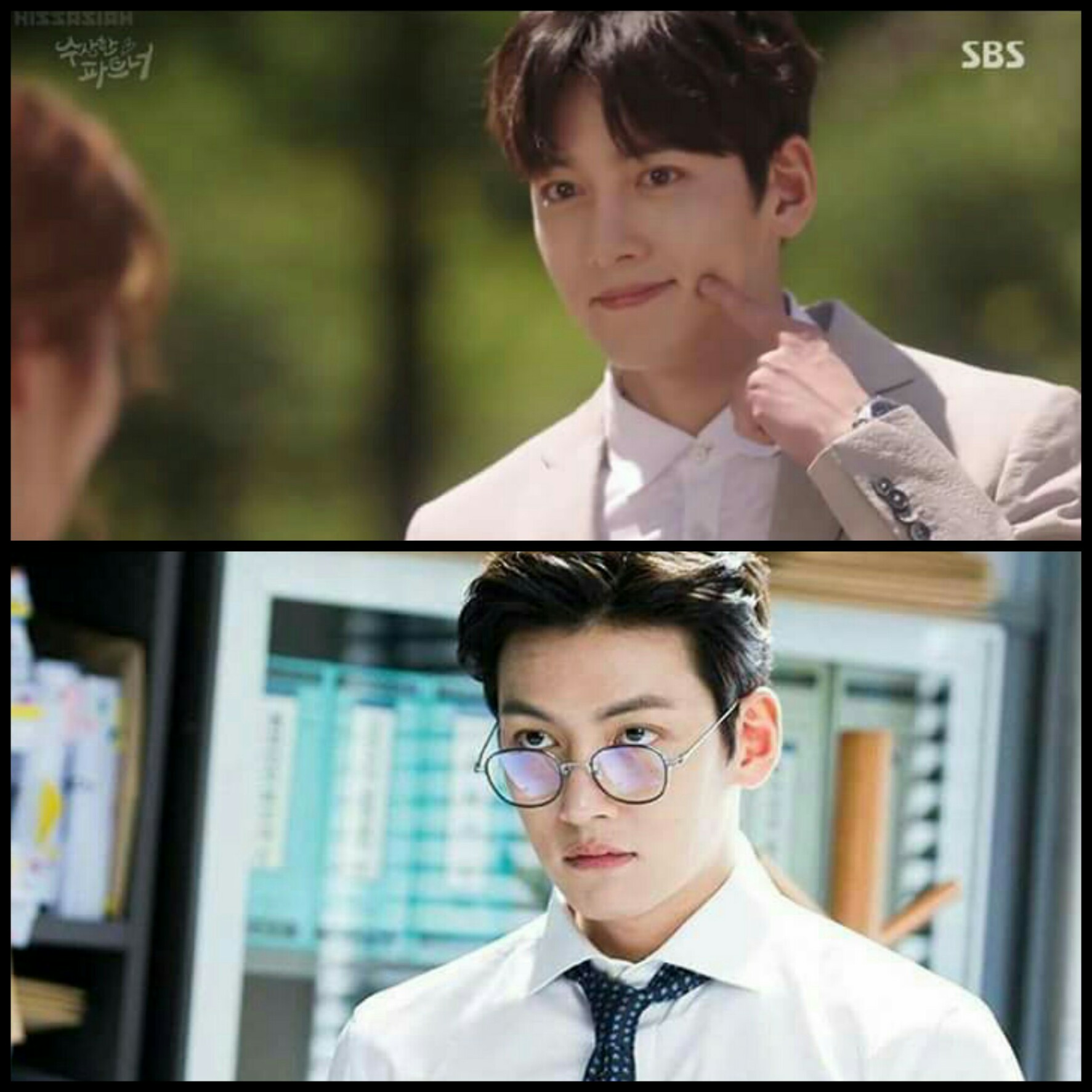 Notoriously known as a prosecutor, Noh Ji Wook (Ji Chang Wook) lives a typical crime investigator life until a judicial trainee Eun Bong Hee (Nam Ji Hyun) comes to disrupt his peaceful existence. Accused of murdering her ex-boyfriend who is the District Attorney’s son, Ji Wook ends up being appointed as the indicter of his trainee’s case.

Ji Wook resigns as a public prosecutor to join his adopted father’s law firm, but his tainted image causes a rift with his fellow attorneys in the law firm. Meanwhile Eun Bong Hee struggles to earn money from her profession.

After her sad parting from the prosecutor who saved her, they meet again while working on a case. Ji Wook ends up establishing a law firm with his father, Eun Hyuk and Mr. Bang – his former legal assistant. Bong Hee joins their team and cohabits with Ji Wook in his house as well. 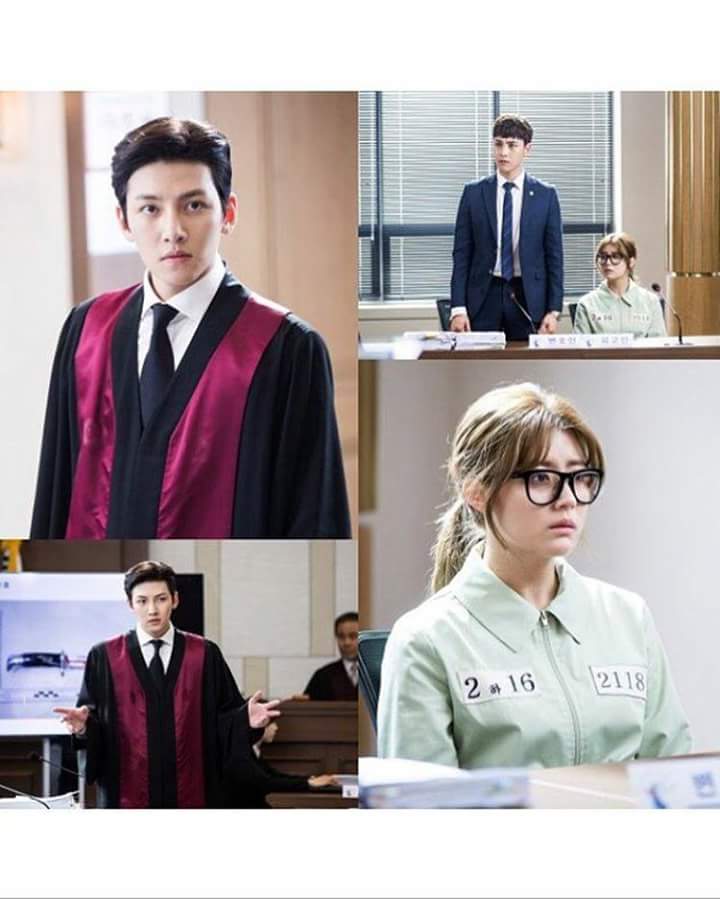 A high-profile murder case of a famous chef seeks their office’s help. The team agrees to work on defendant Jung Hyun Soo’s case against Prosecutor Cha Yoo Jung (Kwon So Ra) – Ji Wook’s ex-girlfriend, who had an affair with Eun Hyuk.

The three used to be good friends, but when Ji Wook unexpectedly paid her a visit and finds his friend in her place, they painfully separated.

Ji Wook’s convincing plea wins them the case but he catches on the dangerous side of the murder suspect he defended. As he is also earning brownie points for Bong Hee to return his relationship offer, he opts to delve more on Hyun Soo’s history by ordering Mr. Bang to do a research.

The puzzle pieces of Hyun Soo’s cruel game is confirmed by Mr. Bang. But the latter is stabbed to almost death by Hyun Soo. Yoo Jung secures a warrant of arrest by finding the planted knife evidence, which is under Ji Wook’s care.

Hyun Soo escapes his captors, but is hit by a hit-and-run vehicle. The villain wakes up with no memory of himself just as Mr. Bang regains consciousness.

Ji Wook discovers the picture of Bong Hee’s father when they slept for the first time. Worried on the irony that is thrown on their relationship, he orders Mr. Bang to get the details of his parents’ arson case.

Bong Hee, who senses something is bothering her boyfriend, lately realizes how deep their connections are due to their parents’ death. Left with no choice, she decides to end their relationship.

Ji Wook convinces her to separate their personal problems by sending her on vacation. But when her former student, Jae Hong becomes a witness to a murder case, she resumes work to help with her student’s case.

Jae Hong is left in Ji Wook’s care. Ji Wook slowly grows fond of the boy as he stays by his side during his nightmares. It is also Jae Hong who helped him regained the tampered memories of what happened on the night his parents died. 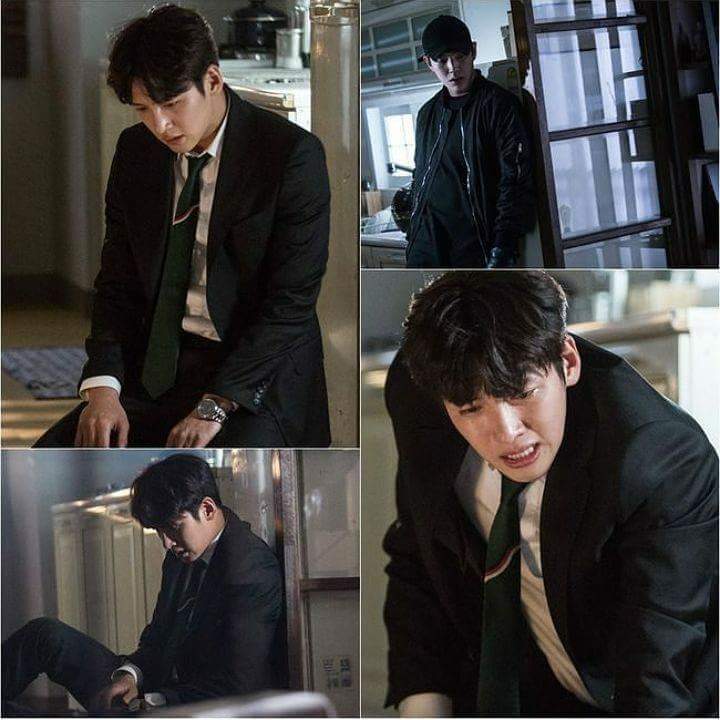 It turns out that Bong Hee’s father actually saved Ji Wook, but died when he goes inside to help his parents. He further remembers that his confession is coerced by the present day District Attorney to close the arson case.

Meanwhile, Hyun Soo recovers consciousness without his memory. Ji Wook brings in materials to help him find his memory. He finds the picture of his first love, and pieces of his memories are slowly coming back at him.

He smartly escapes the hospital but is later on arrested when he visits Ji Wook’s law office to trap Bong Hee. Ji Wook survives the stab as Hyun Soo’s trial commences. He initially agrees to all his crimes but refutes his statement when the newly reinstated prosecutor Ji Wook takes over the case.

Ji Wook pins Hyun Soo with rape indictment as a member of the gang who raped the girl he likes. Pressuring the erratic revengeful psycho, Ji Wook breaks him apart, and he finally confesses on his sins.

Bong Hee ponders on her relationship with Ji Wook after learning how his confession as a boy did harm to her father. She chooses to give a chance for their love so they get back together. 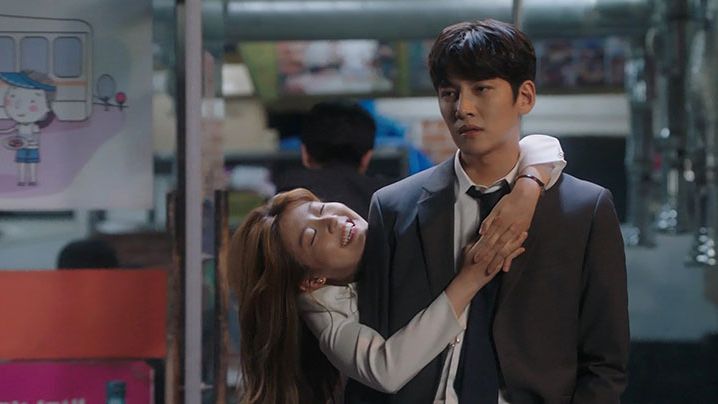