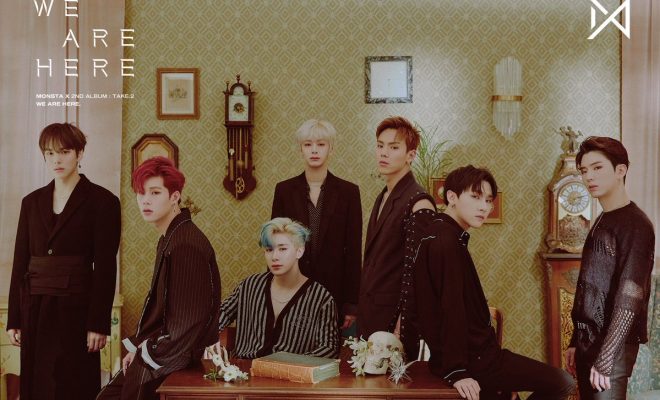 The time is ripe for MONSTA X and they are here to pull you into their grasps.

MONSTA X is defined as a group with power, intensity and an endless well of talent. They will always strike you with their distinct colour and musical signature.

Their newest album, Take.2 We Are Here, starts off with an intro in which I.M sets the mood with a narration. It is different from the previous intro with a lighter sound. “Intro: We Are Here” reflects the darkness of the album with a combination of a synth bass and hints of electronic music.

“Alligator” sounds so distinctly MONSTA X. The track on its own is easy to the ears. What’s interesting about the track is the powerful rap sequence of Joohoney and I.M that was seen previously in “DRAMARAMA”. Wonho tries hard to deliver a catchy hook but they have much more powerful title tracks than this. Nevertheless, they delivered an acceptable track that clearly defines them as the artists they want to be seen as.

“Ghost” mellows down the energy of the album for a bit. It is reminiscent of the slow sound they established with “Myself” in their last album. Interestingly, their vocal prowess are much more alive in this song.

Steve Aoki puts his personal blend into MONSTA X’s music. “Play It Cool” sounds a lot like his previous tracks with a prominent bass line and a specific melody riff that is used throughout the song. Just like in the past, the boys explore different genres in their releases. “Play It Cool” is their latest take on EDM albeit toned down and repetitive.

“No Reason” can be related to a number of past MONSTA X songs like “I Do Love You” and “From Zero”. Wonho produced and arranged all of the previously mentioned songs. “No Reason” continues his tradition of soft ballad tracks with his own professional flair. Although the track is not that catchy like “I Do Love You”, it delivers the emotions it wants to convey to the listeners which is pure romance.

Monsta X’s fusion of past and future

“Give Me Dat” sounds like a track from their earlier albums like TRESPASS or RUSH. It sounds like an older, more mature brother of “Rush”. Wonho greets you with a teasing atmosphere in “Turbulence”. It has the intensity they displayed during the “All In” era.

“Rodeo” is MONSTA X’s own version of the Latin pop craze that groups like Super Junior, Girls’ Generation and VAV seem to dive in recently. However, their electronic hip hop sound still shines throughout the song. Expletives from the rappers make the song added excitement, as well as, the smooth transition to EDM. “Rodeo” can be likened to most of their Japanese releases like “Spotlight”, “Livin’ It Up” and “Black Swan”.

“Stealer” has a genre of its own. A unique mix of slow hip hop and their signature party sound. It sounds like the progression of the experimentalism they explored with “Myself” from their previous album. “Party Time” caps off the album with a clean R&B sound. The track sounds like a song you would play after a long party while cleaning up or just chilling and cooling off.

MONSTA X took their previous tracks and incorporated them into this album. They compiled precious gems from their past releases and gifted themselves — their new and improved selves to their avid listeners. We can safely say that this comeback is a success. It further defines who MONSTA X is and what they really are.

Their consistent development in music while maintaining their signature hip-hop party vibe is an indication of how they are defining themselves as true artists. They seem to never compromise their sound to appeal to the masses or anyone but themselves.