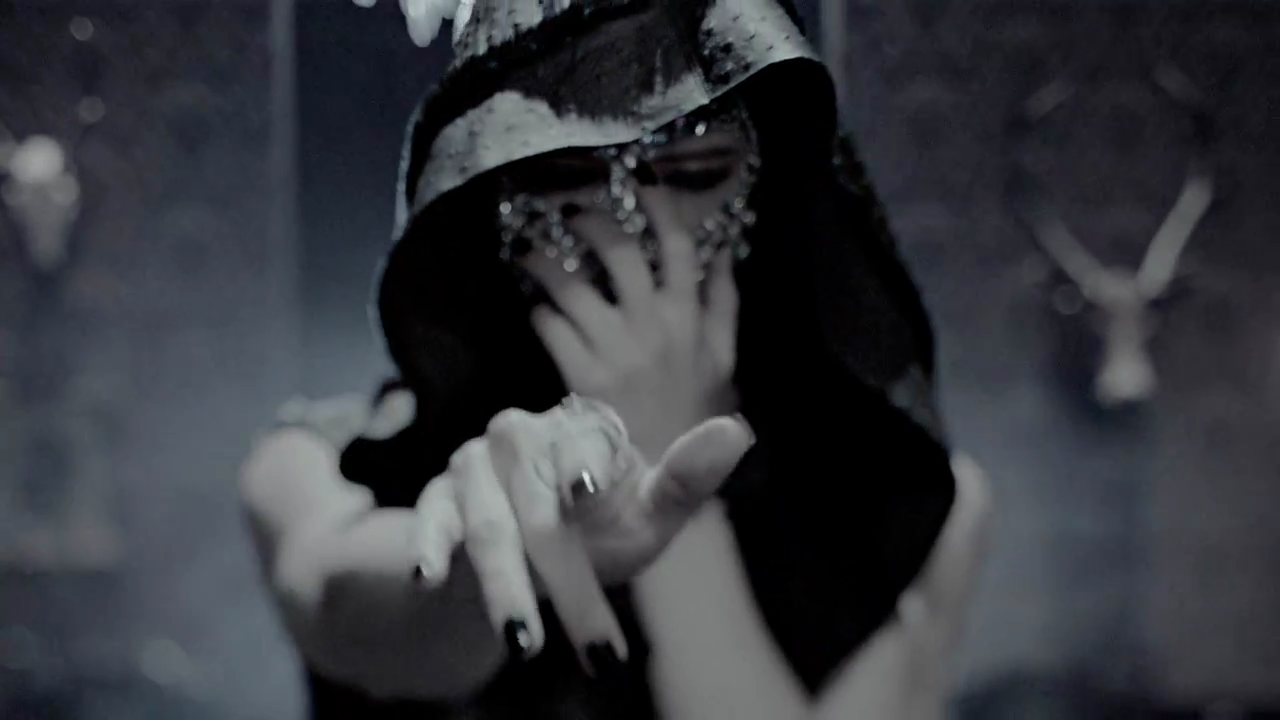 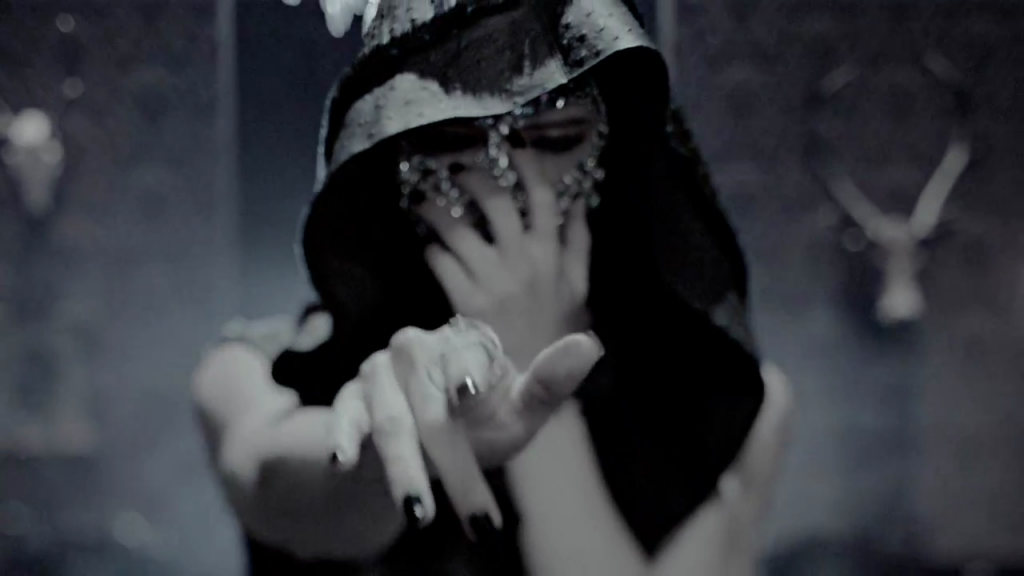 On January 17, 2013, JYJ‘s enigmatic power-vocalist Kim Jaejoong released his first official solo album titled I and unleashed the music video for the album’s title track, Mine. Since the release, the response from fans has been enormous. The track itself, a rock anthem never before seen from Jaejoong, includes elemental influences of Korean Rock and Japanese Rock, with pinches of Goth and Punk staggered throughout, that leave the listener in complete awe. The song’s lyrics delve further into the abyss of (what some say) are the ever-lingering feelings of resentment, anger, and angst Jaejoong has been harboring throughout his career towards those who have mistreated him and his fellow members.

The music video itself has become a force to be reckoned with. Kpop music videos range in styles from cute and fun to dark and sad normally, but the MV for Mine breaks those standards with a release that is truly profound and enlightening while being dark and a little disturbing.

The cinematography, sets, and lighting, along with prop elements such as animals, black candles, and burning braziers, make this MV a delight to the visual senses. With great editing and scene changes perfectly timed to the audio track, this MV gives us a visual representation of the desired feel of the song itself along with telling a symbolic story. The costuming, props, and lighting add to the overall feel of each scene which even more greatly emphasizes the “dark journey” Jaejoong has taken since his debut.

However,  this MV’s symbolism is the real reason why it has become such a hit among JYJ/TVXQ/DBSK fans. Never before has JYJ, or its members, ever released a MV that has so much depth and personifies not only the pains of the past but the hopes for the future. As we travel through the looking glass once more, we will give you our take on the music videos appeal and what we think the music video really means. 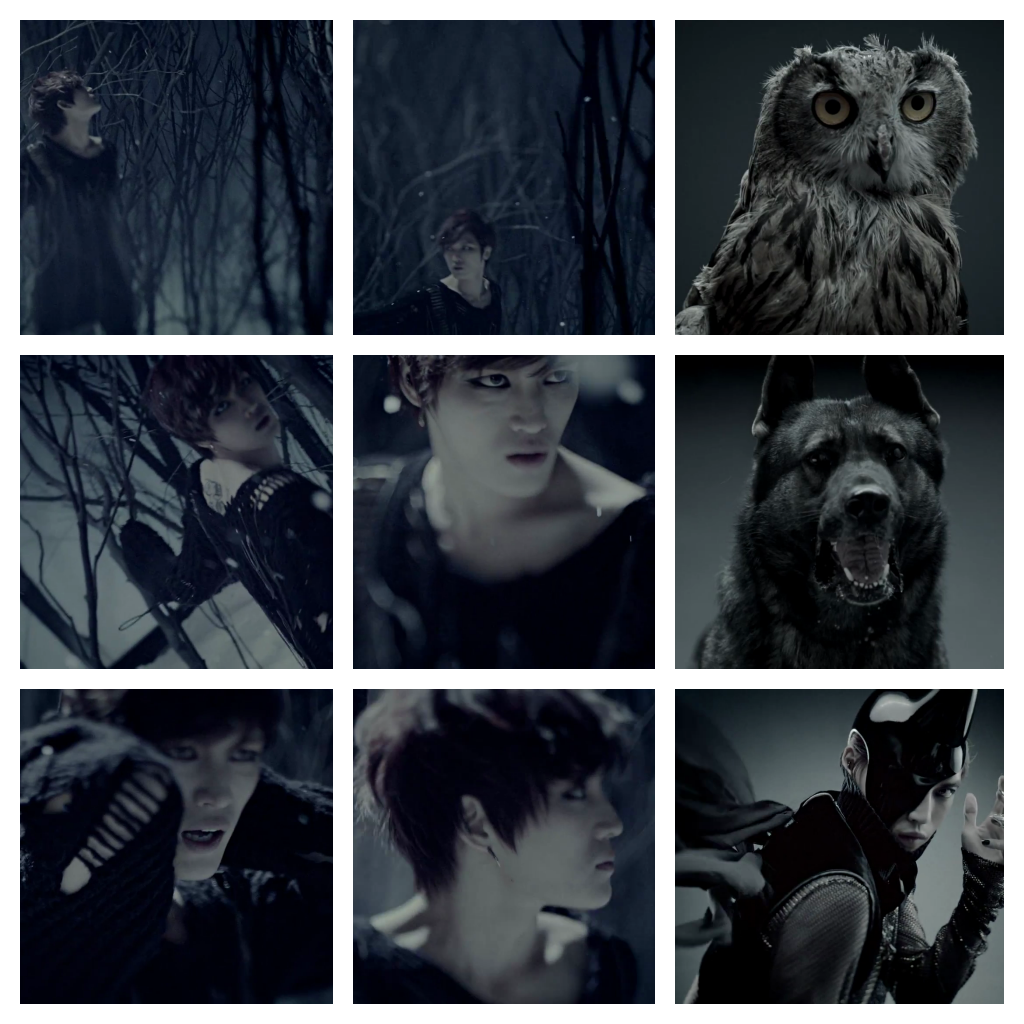 In the opening scenes we find Jaejoong in a forest of barren trees, while wearing shabby clothing, as snow falls all around him. This scene visually portrays the feelings of being trapped in a cold, unfriendly, unfeeling and desolate place where there is no chance for escape. He is lost in the woods without the hope of rescue. His facial expressions show pain, confusion, and dismay as he walks through the dark forest of the unknown and uncontrollable.

According to symbologists, the owl represents wisdom, so the staring owl could represent the wisdom and truth that was always there but he was unable to see because of his captivity. Feeling lost and utterly alone, he finds himself slowly realizing that this was not the life he was meant for and grapples with the agonizing feeling of hopelessness. He now regrets his foolish actions of having faith in an entity that he thought would be his savior but ultimately became his undoing.

Being constantly hounded by the evil forces in this world, represented by the barking dog, Jaejoong longs for freedom while despising the monster he has become because of their influence. Jaejoong’s monster form symbolizes the puppet-like persona and character that is nothing like his true self and was ultimately created by his sinister masters. With these scenes we get our first glimpse into the disparity he felt as he watched his life play out before him with no hopes of being able to control it himself. 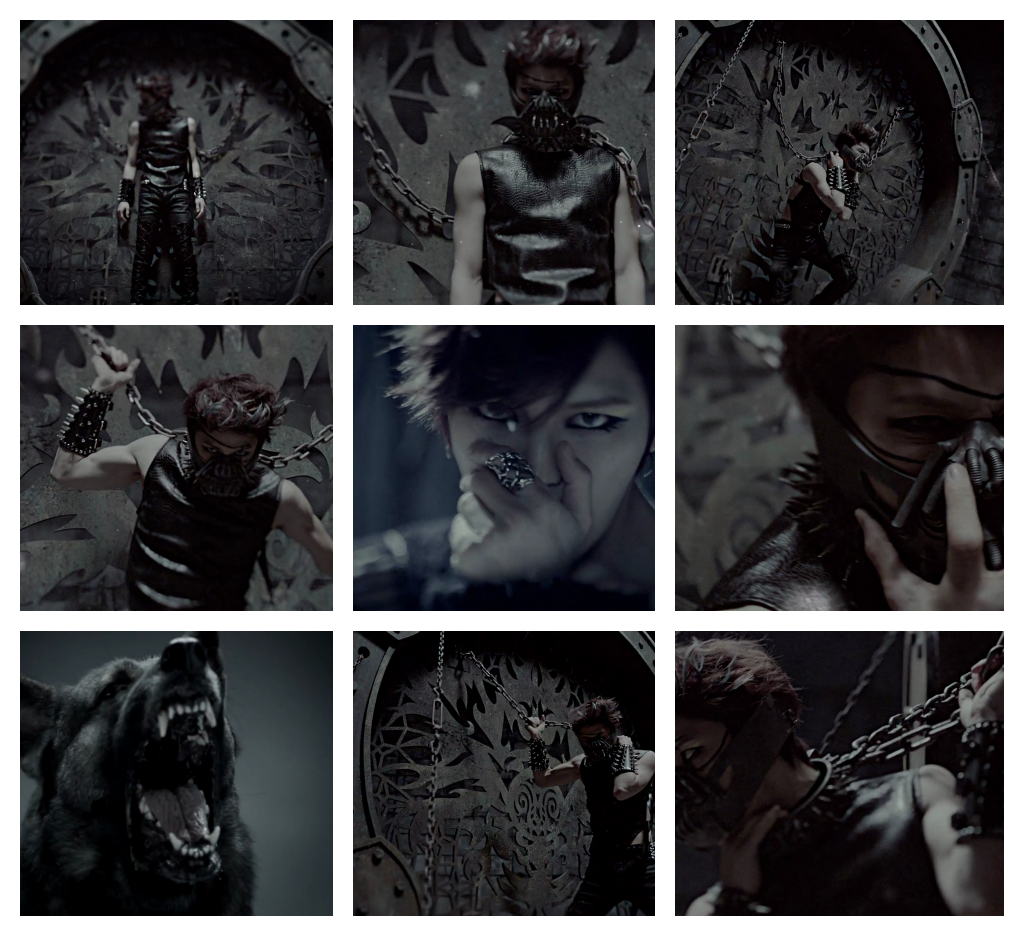 The next scenes are quite prophetic. They symbolize his imposed captivity and being forever chained to the wheel of fate. The choices he has made have forever tied him to this world of utter hopelessness and pain and he finds himself shackled to a seemingly inescapable destiny. Bound and gagged, he cannot do what his heart desires nor speak out against the injustices he’s endured. Only un-gagged when his masters bid it, he still cannot utter the truth for fear of the punishment he surely will receive if he does so.

Struggling against the chains that bind him to his hellish world, he fights with all his might and begins to retaliate against his oppressive masters. The barking and growling dog is once again shown, giving the emphasis of his masters drive to keep their cherished victim in line as well as docile. Their efforts fail to influence and cease Jaejoong’s ever-growing desire for freedom. He chooses to subversively break free from the chains that have bound him for years and, while seeming docile in the presence of his masters, endeavors even more strongly to destroy their hold on him and set himself free -as symbolized in the last clip where Jaejoong is pulling intently on his collar and chains with a ferocious and desperate look. 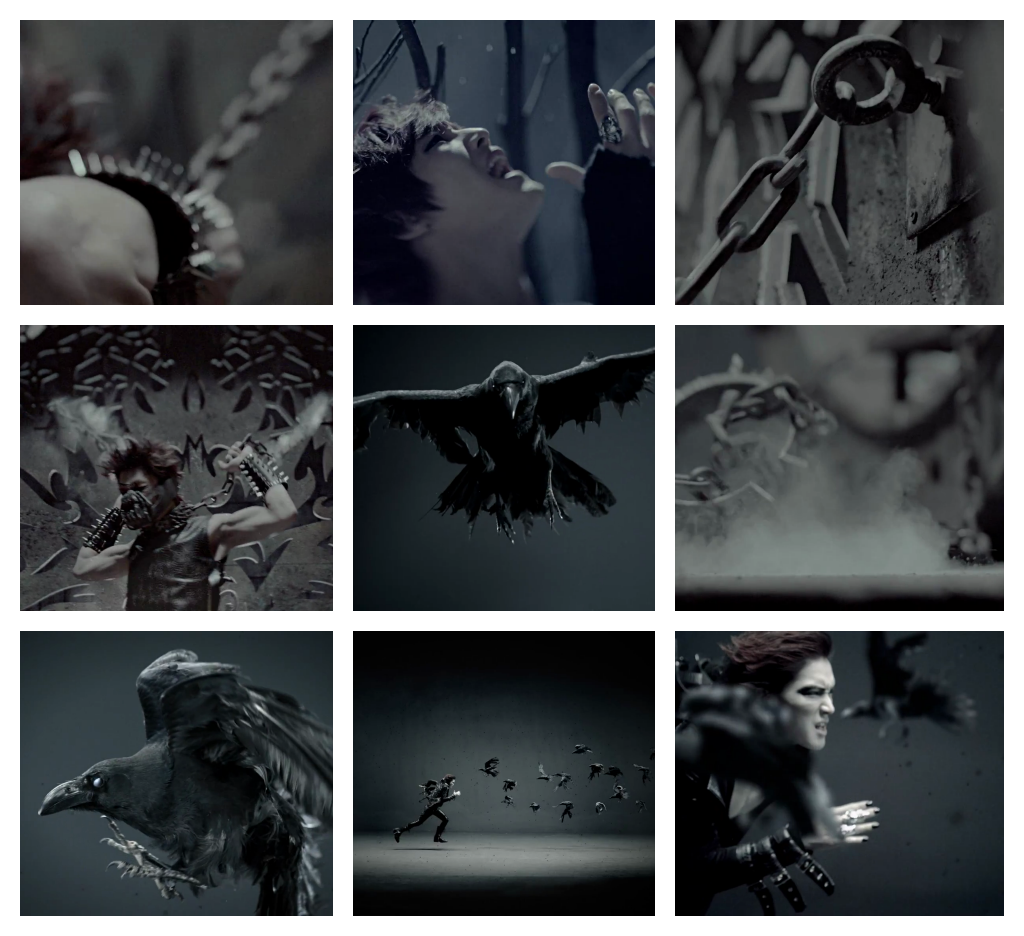 As he struggles even more intently, he quickly begins to realize that he can truly break the chains that bind him and with the very last ounce of his strength he finally breaks the chains of his enslavement. Suddenly freed, his confidence in his abilities overflow with a feeling of pure contempt and arrogance while his oppressive masters become aware of his self-release and seek to recapture him.

According to ancient mythology and legend, the raven symbolizes both the harbinger of death and the entities that find pleasure in the feasting of the remains of war. The use of the raven can be interpreted two ways: the death of Jaejoong’s painful and oppressive past along with the seeking by individuals to feast on his now ended life (or career depending on your point of view). Upon throwing away his bonds, symbolized by the collar hitting the ground, Jaejoong seeks to escape as fast as he can while the insatiable desire of the outside forces (the ravens) stand in his path ready to see him fail and ultimately to pick over his bones when he does. 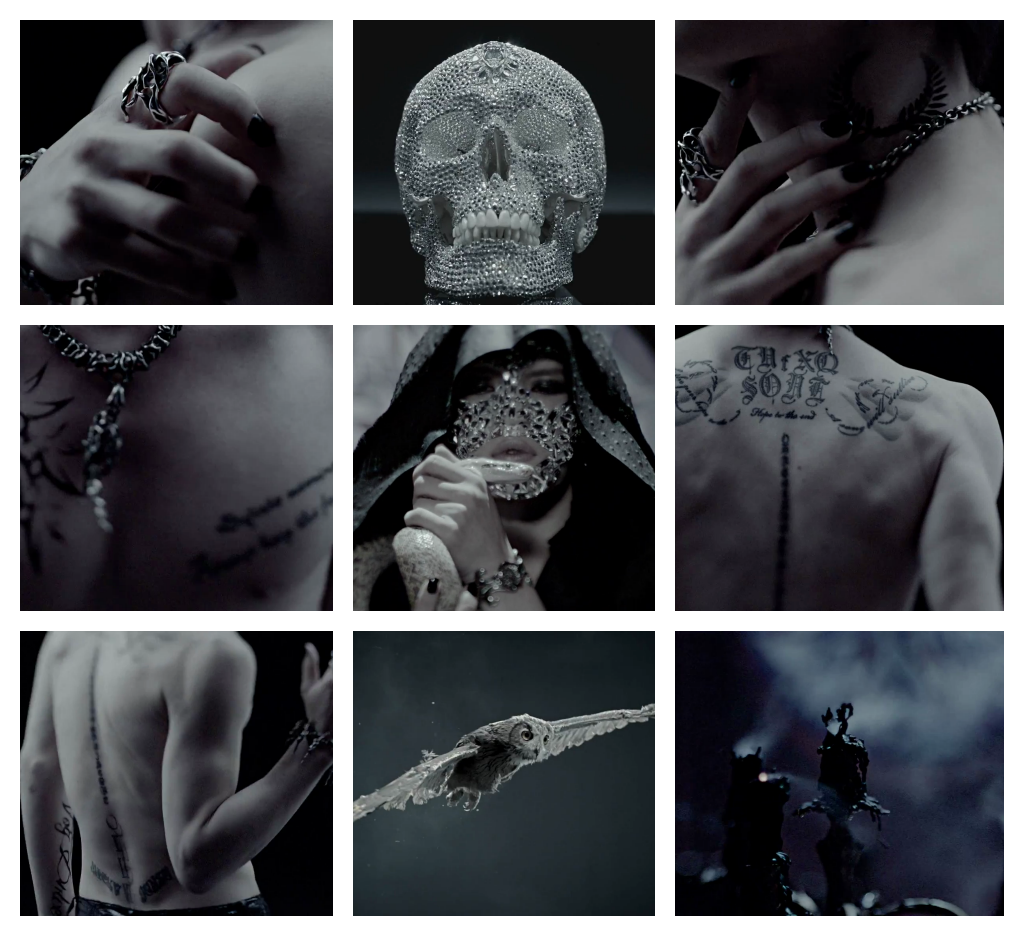 As the music video makes another prophetic turn down the dark alleyway of regret, the next few scenes become a time of self reflection. Free from his chains, Jaejoong now looks at himself through new eyes and finds that what he sees is something that is neither what he used to be or what he wants to be.

The crystalline skull represents the cold hard truth that he failed to ignore for so many years and reminds him of the pain he’s endured. His true self and all that he was is now laid bare for all the world to see. The inspection of his tattoos and body symbolize an awakening to the scars he has sustained due to the foolishness of youth and his enslavement. Going over each scar, one by one, he remembers the pain, suffering, and loss that led to those scars, and he is reminded once again of the precious things (and people) he has lost along the way.

Grappling and wrestling with the guilt he feels from the evils he has committed unto those who he loved the most (handling the snake), Jaejoong pulls himself deeper into self-reflection in the search of his ultimate truth. As the scene flashes to his back you see a symbolic (as well as realistic) example of those who he has lost and as the owl soars into the frame it becomes the representational visual cue of his self revelation. He gains the wisdom he so adamantly sought after and with the extinguishing of the dark candles he then also extinguishes his dark and troubled past -ready for a new beginning.

As his ultimate truth is realized, Jaejoong transforms from the victim of a great tragedy to master of his own fate, as he claims the future he so longed for. The explosive lighting of the braziers in the “house of enlightenment” (the church) shows his rebirth into his new life. He now has the drive and determination he’s always longed for and transforms into a completely different animal. The vampire persona symbolizes not only his confidence but his feeling of newly-found power and strength. He is resolute in his new path and confident in his desires to see all his dreams become a reality.

Ever mindful of the evils that still exist in this world and the falsehoods they speak (opened mouth snake), Jaejoong takes his first steps into his new life and with one giant leap of faith he retakes the world stage. The showing of his new eyes, and the narrowing there of, personifies his new outlook on the world and his unrelenting determination and focus. With his path unrelentingly chosen, his new persona gives him endless possibilities and with the growth of his wings, he is now ready to soar into the world and show everyone what he truly has to offer, as his true self. 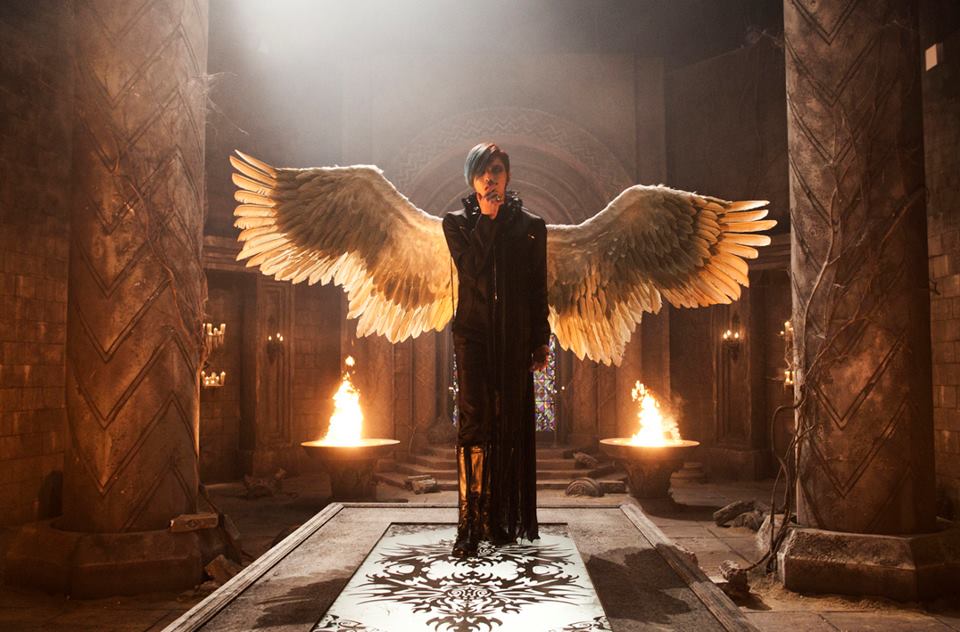 While my interpretations of this MV are uniquely my own, I didn’t pull these conclusions out of thin air. I took into consideration the entire history of JYJ/TVXQ/DBSK and all that the members have endured since before their debut in 2003. As I kept that reference in mind, I began to notice the correlation in the music video’s symbolism with the trials and tribulations that Jaejoong has had to deal with all this time.

The correlation between his rebirth at the end of the video is also a self-representation of his new album as well. While well known for his “made-for-ballad” vocals and for the generalized style of music that JYJ releases, this song and its corresponding MV gave us a glimpse into another side of Jaejoong’s mentality. Delving into the genre of rock was a first for the artist and now that he has accomplished the goal of reinventing himself for all the world to see, he can press on with his chosen path of renewal.

What do you think of our interpretation of Jaejoong’s MV? Did we get it right? Were we way off? Leave us a comment and tell us what you thought of the MV and its underlying symbolism.