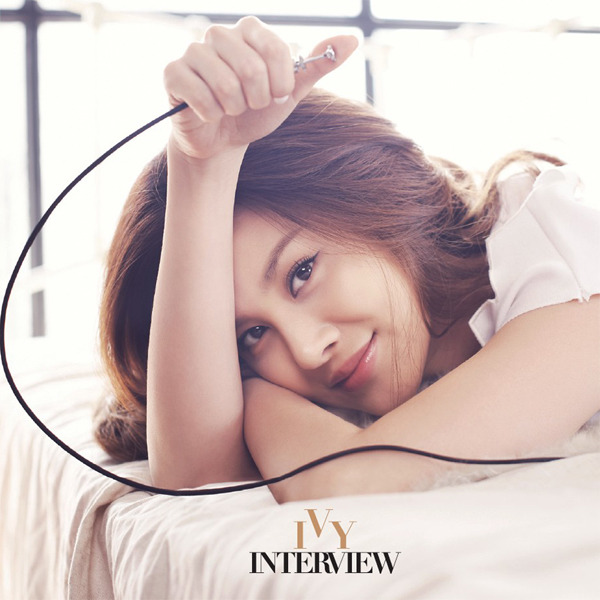 By Jung Bae | May 20, 2012
FacebookTwitter
SubscribeGoogleWhatsappPinterestDiggRedditStumbleuponVkWeiboPocketTumblrMailMeneameOdnoklassniki

It’s only natural to root for Ivy as she attempts to rebuild her career – one that looked so promising, so peerless, until the 2007 rumors that drove her out of the scene in her prime. The first attempt was two and a half years ago, with a full-fledged third studio album, I Be…, released in late 2009 to commercial and critical panning. That album was a flawed effort in several ways, but two are especially salient: first, the concept was too abrasive for a public that still remembered the scandal, and second, the musical spectrum was unfocused and half-baked. Interview, Ivy’s new EP, is attempt number two at a successful comeback, and the first order of business is to address those two issues.

Interview does a good job addressing the first point, so we’ll start with that. What I mean when I say I Be… was “abrasive” is this: in promoting the album, Ivy adhered to her femme fatale image from before. Now, my opinion is that if the musical standard is up to par (it wasn’t in that album, by the way), any externalities – such as concept – should be relatively unimportant. However, considering that the very scandal that derailed her career was sensual in nature, continuing to promote Ivy’s personal appeal upon comeback only served to put off more listeners.

So, Ivy takes a step back in Interview. She dumps the old image and attitude for now; the EP is filled out by mellow sensibilities and more down-to-earth stories. Its sound, lyrics and performances aim for a comfortable feel. This side of Ivy is familiar, especially since in the past she made sure to promote a ballad as a follow-up single in all her releases.  Still, this is the first time she has completely toned down an entire album.

This overall thematic direction is bolstered by solid individual tracks. R&B-pop number, Firefly, is the EP’s best, and features a sugary piano-synth beat that provides ground for Ivy to play around vocally and lyrically, just like 영화처럼 (Like A Movie) does. Alternative-rock track, Someday, is a refreshing departure, written attractively and performed tastefully. 꽃 (Flower), a ballad written by Ivy herself and arranged nicely by Don Spike, sells itself on a soft, wallowing melody.

These low-drive tracks allow the singer to perform in the way she does best. Ivy’s best ballads, from 바본가봐 (Must Be A Fool) to이럴거면 (If You Were Going To), all have soft-edged vocal lines – she belts her high notes effortlessly and without shrillness, and builds emotion slowly and warmly rather than suddenly. That’s precisely what happens in Flower. She was also sublime in occasions like 2007′s Antonio’s Song, where she whispered to and caressed the listener atop a passionate acoustic accompaniment. From a purely vocal perspective, that’s fundamentally similar to Firefly and Like A Movie. Her tone seems to lend itself to this style, and combined with her proven mechanics, it makes these tracks sound pleasant enough. My qualm is that none of them are very memorable, but one could do a lot worse.

Lead single 찢긴 가슴 (Rent Heart), however, throws that approach out, and that leads to problems. (As an aside, that’s “rent” as in “ripped”.) Neither composition nor instrumentation are that interesting to begin with, but what’s worse, is the track forces Ivy to perform uncomfortably. Her singing in Rent Heart is the antithesis of what I discussed in the above paragraph. Her high notes are shrill, the emotion does ramp up suddenly, and there is little of the warmth that characterizes her usual ballads. Ivy’s voice is overstretched in the chorus, and while it doesn’t sound completely unstable (she’s too experienced for that), it’s clear that her major strengths are being taken away. This unnatural performance also makes the song difficult to get into emotionally. The song’s unorthodox structure (just two repetitions of verse and chorus, with an extended first verse) would normally be grounds for props, but in this case a full-minute-long chorus only highlights the central issue.

It’s a bit of a head-scratcher as to why Rent Heart was even included in this album, let alone as lead single, especially when the EP’s overall approach seems to be to stick to what’s worked before. Good thing that the stuff that’s worked before works just as well now – they are the backbone of Interview and what makes it a decent pop release. As I said, these tracks are not too memorable, as Ivy sacrifices exquisiteness for consistency and security. It makes the album a more tentative step than I Be…, but it’s probably the right one to make from a PR standpoint, and sufficient for now. One day, when Ivy’s music blossoms again, we may see another like 유혹의 소나타 (Sonata of Temptation). Then, she will have truly returned.