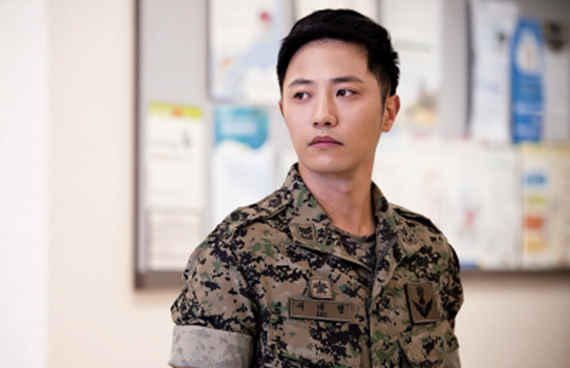 Actor Jin Goo: ‘Descendants of the Sun’ Is Getting A Hotter Response Than ‘All In’

Actor Jin Goo, who plays Seo Dae Young in the top hit drama ‘Descendants of the Sun,’ had an interview with reporters at a cafe in Seoul, where he opened up about his acting career.

Besides Song Joong Ki, there is another actor making fans’ hearts flutter in the hit drama Descendants of the Sun. That is none other than actor Jin Goo. The heartthrob makes strong impression on portraying a strong-minded master sergeant with a warm heart hidden behind his taciturnity and cold appearance.

Jin Goo debuted in 2003 with the SBS popular drama titled ‘All In,’ acting alongside Lee Byung Hun and Song Hye Kyo. He gathered massive attention from public media by playing the childhood role of Lee’s character in the drama. Since then, he has not seized much opportunity to showcase his acting talent. Therefore, his role in Descendants of the Sun marks a remarkable milestone in the actor’s 14 year-long acting career.

I admit that I’m really elated because this is my first time to receive such a hot response. It’s like I’m getting another chance to start anew, really. ‘Descendants of the Sun’ is getting a hotter response than ‘All In.’ After all those (hard) times, I’m now on mind control in order not to be swayed too much by feelings.”

The actor revealed that his character in the drama is more rigid and manly than him in real life:

I don’t have the overpowering personality that my TV and film characters have. I also have a weak element in me, which leads me to cry often.

He also paid great compliments to his co-star Kim Ji Won in the drama, saying:

Kim looked great as she performed the role of Yoon Myeong Ju, and the character she plays is lovely. I also feel sorry and thankful to Yoon.