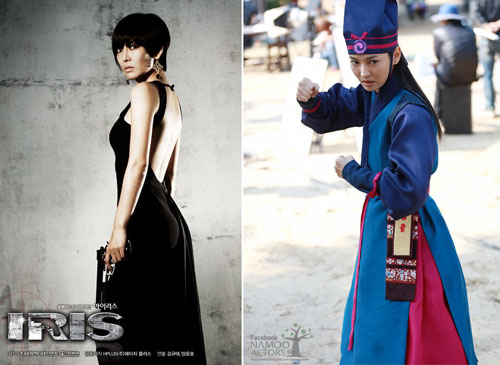 The character Sunhwa of KBS‘s drama IRIS has returned to the drama scene for SBS ongoing drama, The Great Seer.

One of The Great Seer‘s main characters, actress Kim SoYeon, has recently entertained the film crew who was exhausted of the long waiting time for the film set, to laugh and made the mood lighter. During the waiting time for the film set, SoYeon did little actions that fans can see often in IRIS and funny poses which created a relaxing mood for all. A charismatic photo of her wearing a traditional outfit with her fists up has also been revealed.

In 2009, she is remembered as the character who is filled with charisma through IRIS but in the new drama, her character is a bright and lively character. Many people who watch the new drama as well as staff complimented of the many varieties of acting she can perform.

The netizens who came across this news and photo said, “That’s why she’s called the happy virus Kim SoYeon”, “Acting IRIS with a traditional martial arts outfit, that’s cute”, “Kim SoYeon’s acting is the best”, “I’m enjoying watching The Great Seer!” and left many other encouraging comments.

You can check out her acting on SBS every Wednesday and Thursday night at 9:55PM KST.