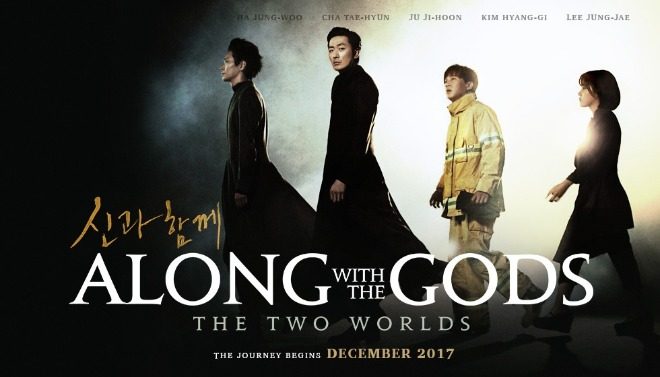 Along with the Gods is breaking records after records!

South Korean fantasy drama film Along with the Gods is unstoppable as it continues to break records in its run.

It has beaten out the 2016 blockbuster movie Train to Busan and the 2004 war film Taegukgi: The Brotherhood of War by reaching the 12-million mark on its 23rd day in local theaters. On its 24th day, Along with the Gods has dethroned A Taxi Driver as the top grossing film released in 2017.

Now, the film, which stars Ha Jung Woo, Cha Tae Hyun, Ju Ji Hoon, and Kim Hyang Gi, has surpassed the 13-million mark in attendance, taking away the spot of the 2012 film The Thieves as fifth most-watched film of all time in South Korea.

According to the box-office tally from the Korean Film Council, Along with the Gods has attracted 13,039,675 moviegoers as of January 16.

The fantasy drama film tells the story of a firefighter (played by Cha Tae Hyun), who goes through seven hells for 49 days, following his death and guided by three grim reapers.

Along with the Gods is based on a webtoon by Joo Ho Min. It is the first installment of a two-part series directed by Kim Yong Hwa. The second installment is expected to premiere this summer.

Along with the Gods in the Philippines

Aside from South Korea, the film was pre-sold to 90 countries at the American Film Market. It will open in 12 Asian countries including the Philippines.

Brought to the archipelago by Viva International Pictures, Along with Gods will hit Philippine theaters on January 31. Visit its Facebook page for more details.

A still from the film released by Lotte Entertainment