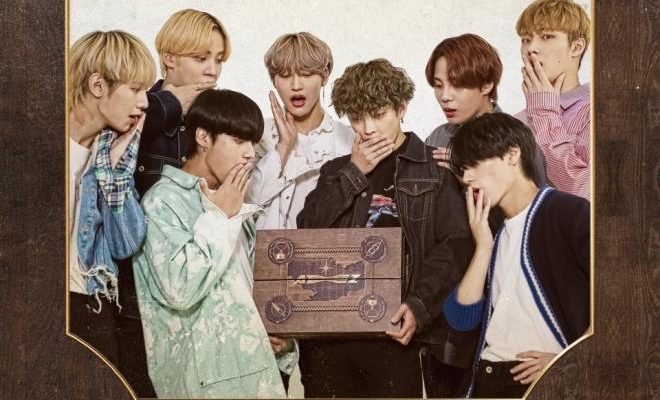 ATEEZ releases a brand new reality show with Kakao TV, giving fans a glimpse into their daily lives as well as a new story crucial to their pirate-concept worldview!

ATEEZ releases a brand new reality show at the end of this month, in collaboration with Kakao TV. This marks the group’s third reality series following ATEEZ WANTED and ATEEZ TREASURE FILM, which were both aired through ATEEZ’s YouTube channel. Their newest series titled ATEEZ FEVER ROAD incorporates the charms of the members, as well as their conceptual worldview.

The reality show will have an adventure theme, including various missions. The series begins with the group locating a secret space and the missions hidden within it, solving various activities prepared by a mysterious person two years ago. Amidst the mystery of who created such events and their intentions, the members will also participate in various games along the way, adding to the excitement.

Additionally, the show depicts the members’ teamwork and unique chemistry. The episodes will also reveal the boyish charm of their everyday life in which they joke with one another and hang out. ATEEZ FEVER ROAD will show both adventurous missions as well as the more realistic side of the artists off stage.

In particular, fans can look forward to the greater elaboration of their pirate worldview. Elements of their complex and in-depth story will unveil throughout the show for the first time. Once all missions are solved, a crucial new story will be revealed. This story will be necessary for fans to understand ATEEZ’s worldview.

Furthermore, the story first explored in ATEEZ’ s “Diary Film” will continue during the reality series. The prologue and epilogue videos of the characters and stories of each member will release with each episode.

Park Hye Jin, who directed ATEEZ FEVER ROAD stated, “Recently, various K-pop idols are receiving attention for storytelling through a fresh worldview. As ATEEZ is a group that is attracting attention with a strong and attractive worldview, we ask for your attention to “ATEEZ Fever Road,” which offers a glimpse of their daily familiarity and the stories of members in the worldview.”

Meanwhile, the members celebrate their second anniversary this month. The group plans an extravagant digital concert to celebrate with fans, hosted in collaboration with MyMusicTaste. The concert airs October 24 at 3PM KST, exclusively on MyMusicTaste’s streaming platform.

ATEEZ FEVER ROAD releases its first teaser on October 23. The first episode releases on Kakao TV on October 26 at noon KST. The series includes a total of eight 15 minute episodes. Following its premiere, the show will air on Kakao TV every Monday and Thursday at noon KST for four weeks.