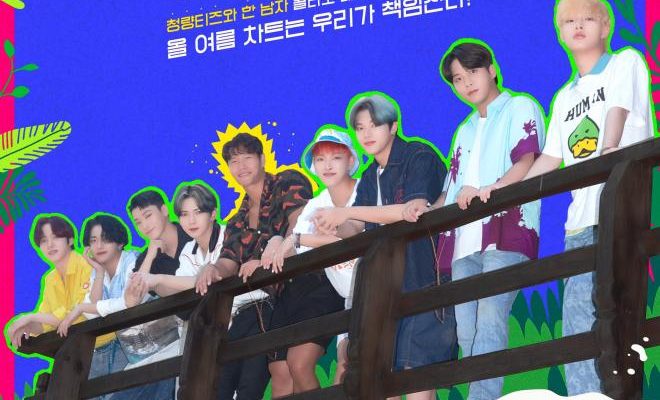 ATEEZ will embark on another iconic collab with Kim Jongkook as they reunite for an upcoming reality show and will release a new track together!

ATEEZ and Kim Jongkook will work together once more! The legendary K-Pop artists will reunite for a refreshing summer collaboration consisting of a reality show and a new song. 1theK released an official teaser poster for the project, displaying the artists together amidst illustrations of the cool ocean waves and palm leaves.

The project, titled The Man Of The Pirate King, consists of a reality program and a new song. The show will document the collaboration process between the artists as they work together to release the new track. The program will reveal the artists’ plans to dominate the summer charts and captivate listeners of all ages with a refreshing and energetic sound for the season.

This is not the first time ATEEZ and Kim Jongkook have teamed up.

Previously, Kim Jongkook was impressed by ATEEZ’s performance of Turbo’s “Black Cat” during Immortal Songs. ATEEZ swept the crown during the episode, and Kim Jongkook made a subsequent guest appearance in their Halloween special music video cover of “Black Cat”.

Since their initial meeting, ATEEZ and Kim Jongkook formed an amiable working friendship. As such, fans are eager to see the artists’ chemistry together once again during their upcoming collaboration. Moreover, many are curious to see what music K-Pop’s next-generation stars and the iconic Kim Jongkook will create.

Meanwhile, ATEEZ and Kim Jongkook’s newest collaboration show, The Man Of The Pirate King, will be pre-released on Kakao TV on August 11 at 7 PM KST. Additionally, the program will air on 1theK’s YouTube channel on August 16 at 5 PM KST.