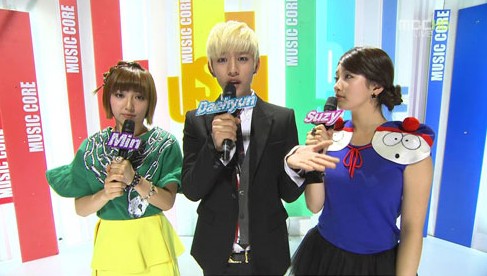 B.A.P’s DaeHyun teams up with Suzy and Min for Music Core 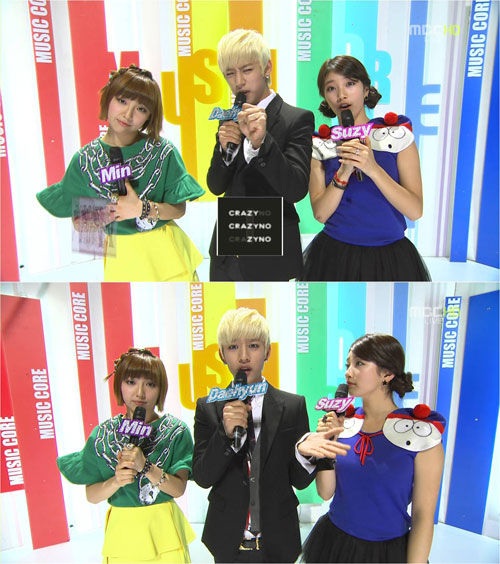 Music Core‘s special MC trio has been getting the popular search on the portal sites. On November 10, MBC‘s Show! Music Core was aired, but due to Girls’ Generations TaeYeon, Tiffany, Seoyeon having out-of-country schedules, they left the empty MC seats for B.A.P‘s DaeHyun, Miss A‘s Suzy and Min as special MCs for the day.

Widely known as ‘Busan’s Wonbin’ B.A.P’s main vocalist DaeHyun carried the MC spot very well even though it was his first time. Matching his rhythm with Suzy and Min, they did their job neatly and the producing team was very surprised at the way they handled the MC spot. DaeHyun received a lot of favorable comments for his acting skills in between the introductions of the songs for each performance. He seemed relaxed and free even though it was a live recording. Because of his strong leading ability, he was dubbed 1st as ‘Music Core special MC’ on many portal sites.

B.A.P is getting attention as not only DaeHyun did a good job for handling the MC position for Music Core, but Himchan also had an MC spot for the ‘College Entrance Exam concert’. Many people are beginning to acknowledge B.A.P members and taking careful notes of their activities on stage and off stage as well.