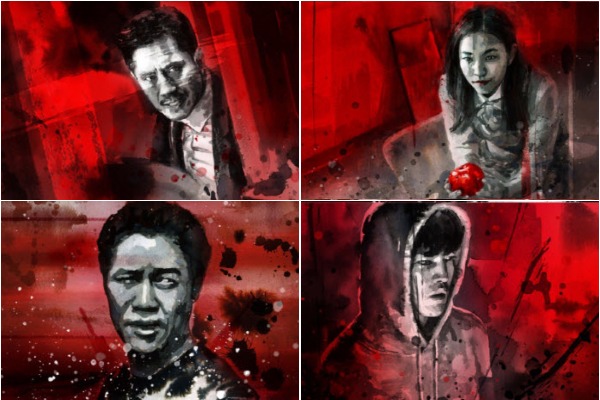 The character concept art features four of the drama’s cast. Sketches of actors Shin Ha Kyun, Lee Seol, Park Ho San and Kim Gun Woo are in a black and red color scheme. This highlights the unique “visual” of the characters they play.

Bad Detective (literal translation) is about an experienced detective, Woo Tae Suk. He has been living a lonely existence and his main focus in life is solving crimes. Woo Tae Suk, played by Shin Hya Kun, meets a woman, Eun Sun Jae (Lee Seol) who is a psychopath. The unlikely pair teams up in order to solve crimes.

Concept art usually requires a certain amount of time to prepare and the release of these four characters shows the production team’s dedication and effort to create a quality drama.

Before the release of the character concept art, a series of character-specific prequel videos were dropped.

Fans of the genre can expect a fresh take and new concept about criminal investigation, in this highly anticipated psychological crime-thriller.

PD Kim Dae Jin (Golden Pouch, Kill Me, Heal Me) directs Less Than Evil which will air on MBC after the conclusion of Bad Papa.

Prequel: A bad detective in a suit

Hellokpop, as an independent Korean entertainment news website (without influence from any agency or corporation), we need your support! If you have enjoyed our work, consider to support us with a one-time or recurring donation from as low as US$5 to keep our site going! Donate securely below via Stripe, Paypal, Apple Pay or Google Wallet.
FacebookTwitter
SubscribeGoogleWhatsappPinterestDiggRedditStumbleuponVkWeiboPocketTumblrMailMeneameOdnoklassniki
Related ItemsBad DetectiveKdramaLess than EvilMBC
← Previous Story Park Shin Yang, Go Hyun Jung To Show Synergy In “Neighborhood Lawyer Jo Deul Ho” Season 2
Next Story → 5 K-Dramas That Will Warm Your Hearts On Cold Winter Nights