Relive 10 Years of BIGBANG With ‘MADE: The Movie’ In The Philippines

Celebrate BIGBANG’s 10th Anniversary in this one-day event screening of ‘MADE: The Movie’ in the Philippines!

Korea’s hottest K-pop male group BIGBANG marks its 10th Anniversary with ‘BIGBANG MADE: The Movie’. It follows the journey of the golden standard by which every K-pop group is measured during the boys’ record-breaking ‘[MADE] World Tour 2015’, which included Manila on July 30, 2015, at the MOA Arena, Pasay City. 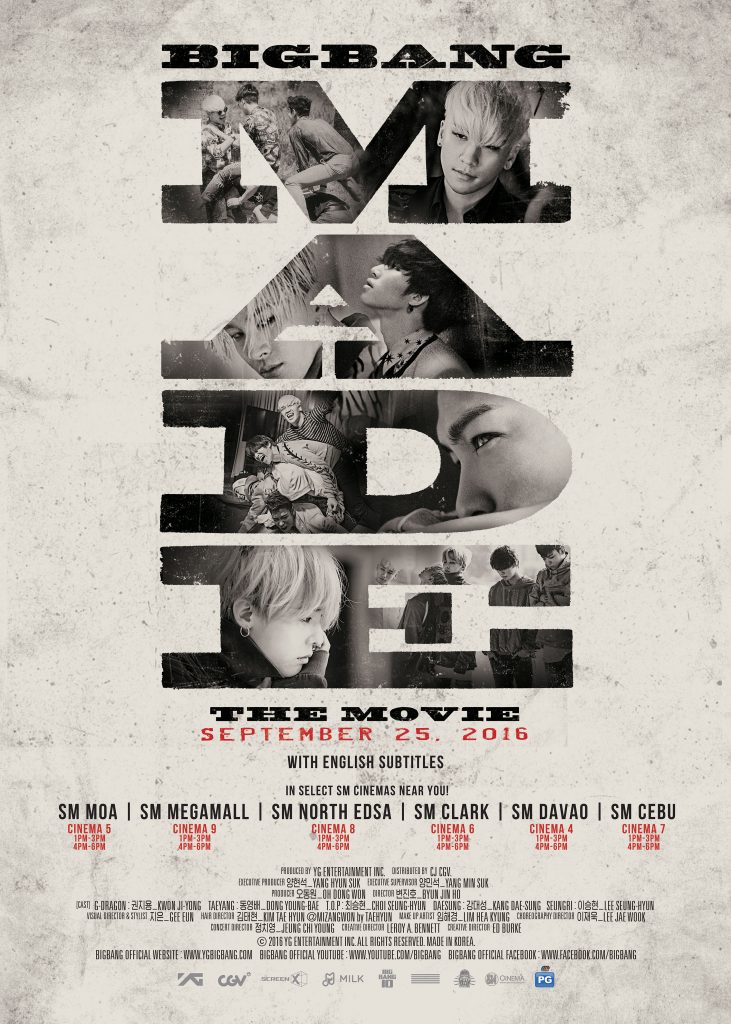 BIGBANG, formed by YG Entertainment, is one of Korea’s most bankable musical groups;  consisting of G-Dragon, T.O.P, Taeyang, Daesung, and Seungri. Since their 2006 debut, they have evolved as artists, and exerted themselves as a style icon for the modern generation. They are admired by world-renowned artists, and fashion authorities, both locally and internationally.

The music of BIGBANG has garnered every bit of attention and enormous recognition. The boys’ official YouTube channel has accumulated over an amazing 1.2 billion views, with their most popular hits Fantastic Baby, Blue, and Bad Boy, that accounted for more than 250 million views.

The music video of Fantastic Baby was recently awarded ‘Music Video of the Year’ by YouTube, as well as the ‘World’s Best Video’ by the World Music Awards in 2014.

The music video for Monster gained over 3 million views on the first day of its release, setting the record for the most views received by a K-pop artist within the shortest period of time.

BIGBANG’s worldwide successes have won them lots of prestigious awards, including ‘World’s Best Group’ at the World Music Awards 2014, and ‘Best Worldwide Act’ at the MTV Europe Music Awards in 2011. They are also the first Asian artist to be awarded the ‘Best Fan Award’ in the MTV Italy TRL Awards in 2012, firmly establishing their status in international music industry.

BIGBANG’s ‘MADE World Tour’ in 2015 was a critical and commercial success, with the Los Angeles Times describing the group as “one of the most inventive, aesthetically visionary acts in its genre”, and called their Anaheim, California concert an “incredibly significant moment for KPop,” praising the diversity of their songs and performances. 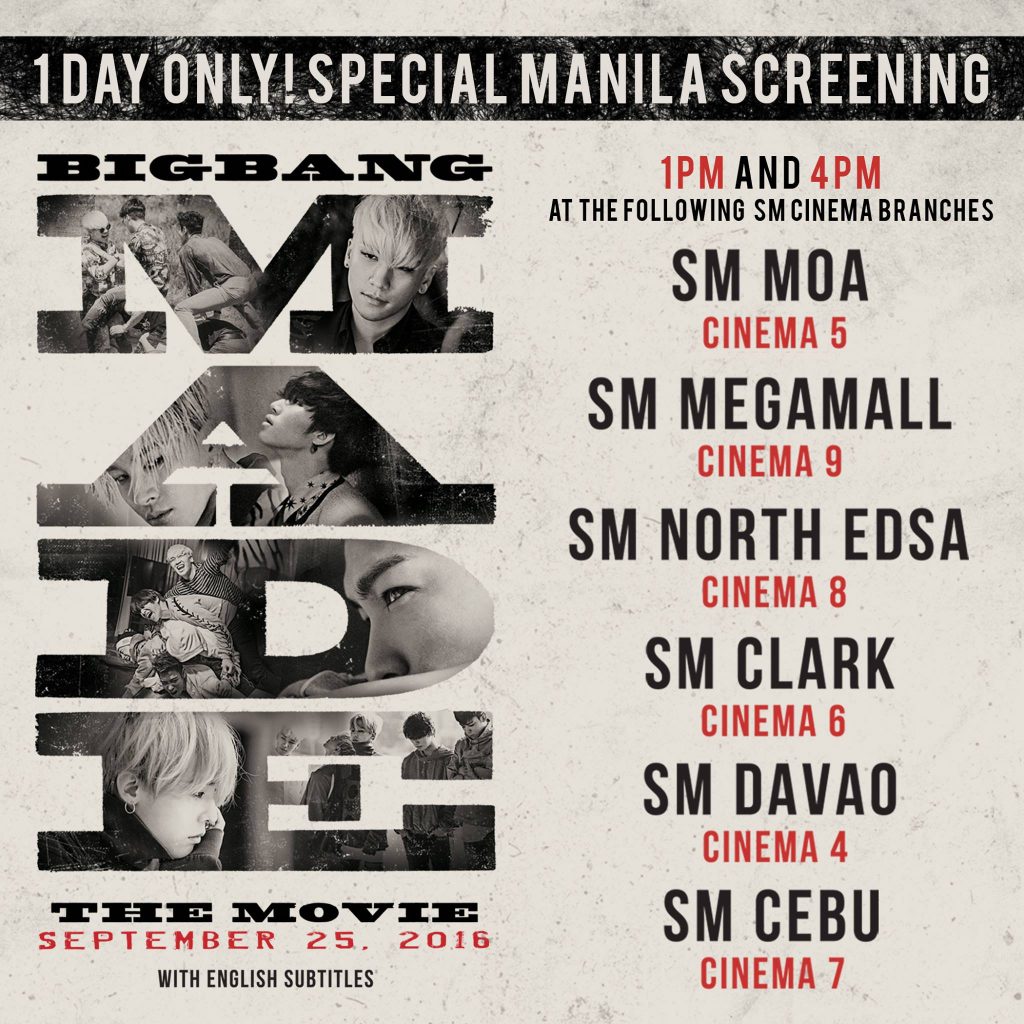 ‘BIGBANG MADE: The Movie’ is co-presented by YG Entertainment and PULP Live World. It will be shown with English subtitles this September 25, 2016 at SM Mall of Asia Cinema 5, SM Megamall Cinema 9, SM North EDSA Cinema 8, SM Clark Cinema 6, SM Davao Cinema 4 and SM Cebu Cinema 7 from 1PM-3PM and 4PM-6PM.

Tickets are available at SM Tickets starting on September 11, and are priced at P1,000 in all SM Ticket Outlets nationwide, or online via SM Tickets. Ticketing charges apply.

Watch the trailer of ‘MADE: The Movie’ (Special Manila Screening) here:

Now we are giving away one (1) ticket to a lucky reader to watch the movie on September 25 at SM North EDSA, 4PM. 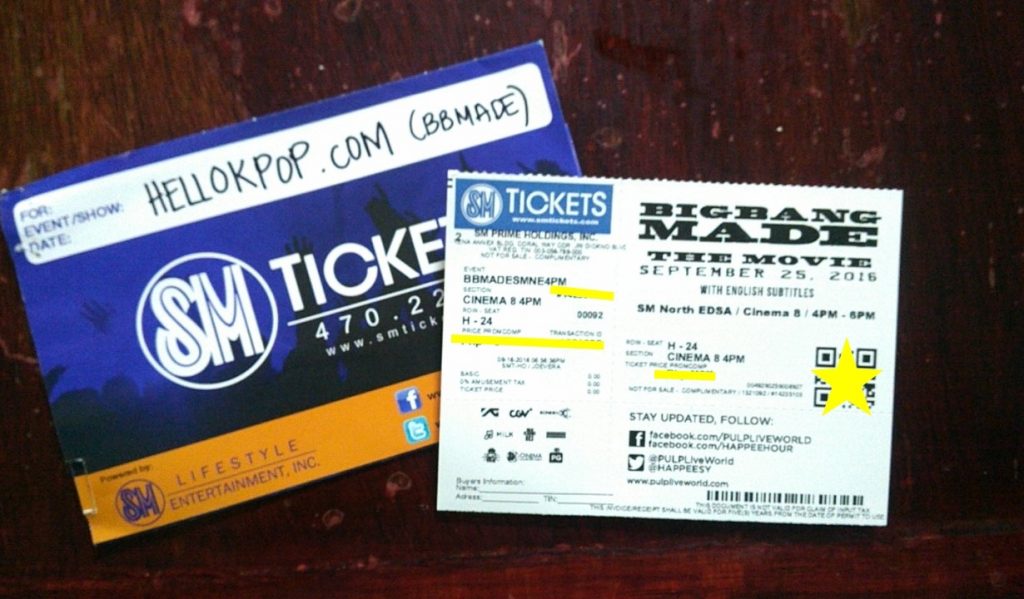 The giveaway ends on September 25, 12PM PHT. One winner will be chosen randomly and announced at 1PM.

*Contest is open to Metro Manila residents only.

For Hellokpop contest rules, go to this link.

We would like to thank PULP Live World for the tickets to the BIGBANG’S MADE: The Movie in Manila special screening.