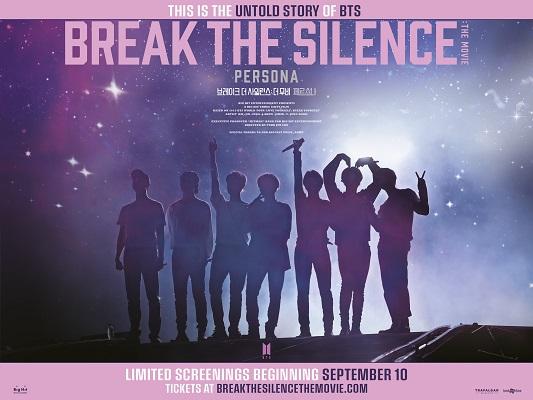 A must-watch for Singapore ARMYs!

Golden Village (GV) previously announced that it had to increased the number of screenings for the new BTS’ feature film Break The Silence: The Movie following an overwhelming demand for tickets.

The highly anticipated feature film is now taking place at all GV cinemas in Singapore since 10 September 2020. Prior to the opening, over 98% of the tickets were reportedly snapped up on the first day of ticket pre-sales.

Break The Silence: The Movie focuses on the sensational septet’s first international Love Yourself: Speak Yourself World Tour and provide fans with an insight on each member. Viewers will get a behind-the-curtain experience as RM, Jimin, Suga, Jungkook, V, Jin and J-Hope share their untold personal stories. The boys performed in various cities such as Los Angeles, Chicago, New York, Sao Paulo, London, Paris, Osaka, Shizuoka, Riyadh and Seoul.

The world tour also saw the boyband topping the Billboard Boxscore, as well as making history by being the first Korean music group to perform at Wembley Stadium in the UK.

Fans can catch Break The Silence: The Movie only at GV Cinemas  Tickets are priced at $22 for GV Movie Club members and $24 for the public.

In addition, ticket holders can redeem a free limited edition commemorative postcard with every ticket purchased (whilst stocks last).

Head on to your nearest GV cinema and get your front seat with BTS today!

For full screening schedule and more information on Break The Silence: The Movie, please visit gv.com.sg. Tickets are available for purchase at all GV cinemas, on GV’s website and via the iGV app (available on Apple Store and Google Play)