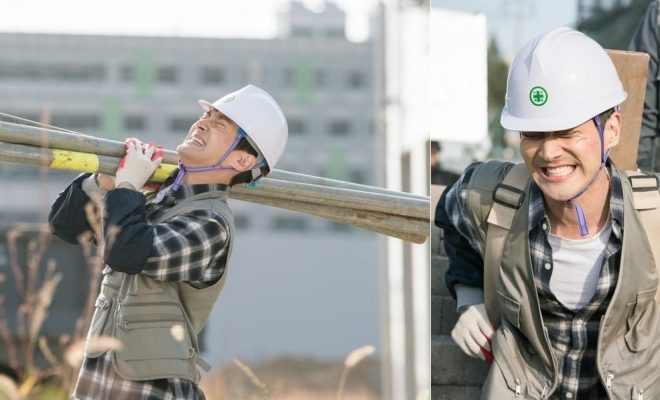 Choi Siwon is showing another tough side of him. This time, it pains fans.

Known as a Great Man after his charity work in Vietnam, Choi Siwon continues to impart and remind important virtues and values, even in drama stills.

The Super Junior’s post military K-drama Revolutionary Love is due to premiere on October 14, Saturday. Ahead of the first episode, TVN has released the final set of teasers with more stills of the drama cast.

In these freshly revealed still cuts, lead actors Choi Siwon (Byun Hyuk) and Kang Sora (Baek Joon) turn into construction workers. Byun Hyuk, who is actually super rich as a conglomerate heir, is introduced by Baek Joon to a job that pays well but with hard labor.

The hard labor, itself, is seriously hard, though.

In one photo, Byun Hyuk (Choi Siwon) looks exhausted, dazing lifelessly in the air with his mouth open.

In other photos, he is struggling with heavy bricks and bulky metal pipes. He looks as if he is about to collapse.

These pictures of Choi Siwon consciously remind readers to be thankful to construction workers that tirelessly help everyone to build a house where they can call it a home.

Hellokpop, as an independent Korean entertainment news website (without influence from any agency or corporation), we need your support! If you have enjoyed our work, consider to support us with a one-time or recurring donation from as low as US$5 to keep our site going! Donate securely below via Stripe, Paypal, Apple Pay or Google Wallet.
66
SHARES
FacebookTwitter
SubscribeGoogleWhatsappPinterestDiggRedditStumbleuponVkWeiboPocketTumblrMailMeneameOdnoklassniki
Related ItemsChoi SiwonKang Sorarevolutionary loveSuper Junior
← Previous Story K-Drama Premiere: “Witch’s Court” Delightfully Entertains While Maintaining Legal Drama Grit
Next Story → K-Drama Premiere: “Mad Dog” Delivers The Exciting Picture Of Special Investigators Probing Insurance Fraud