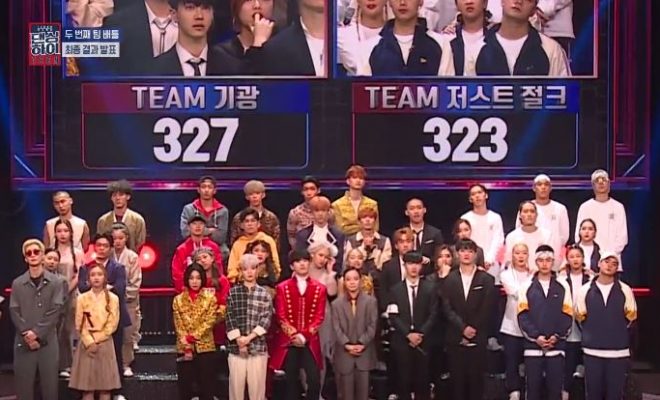 Impressing the judges and audiences with his ace performer’s energy, the October 12 episode of KBS2’s Dancing High Teen saw the resurgence of Team Gikwang. 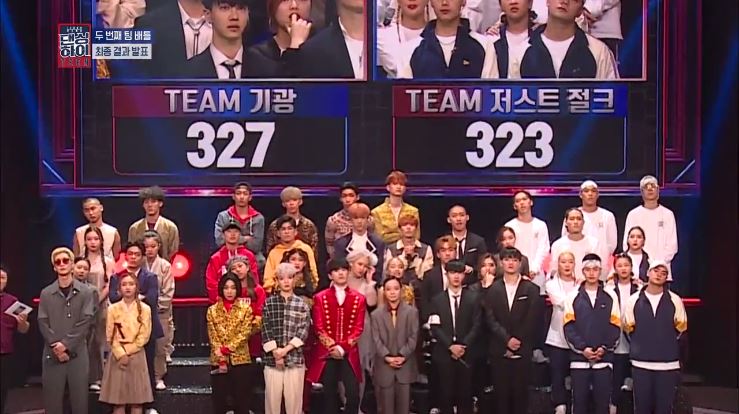 Placing third on the first half of the second battle, Team Gikwang hopes to avoid another elimination. They also want to prevent the team’s dissolution. With that in mind, the team concentrates in supporting their representative for the ace unit presentation.

Delegates from teams Lia Kim and Lee Seung Hoon feel the pressure as they are the bottom teams of the first round. Meanwhile Teams Hoya and Just Jerk, though feeling quite comfortable as the top two finishers, want to sustain their momentum and keep their places.

Lee Seung Hoon and Just Jerk held a mini audition for its respective members to determine their representatives. While the rest of the coaches readily picked out their ace performers. 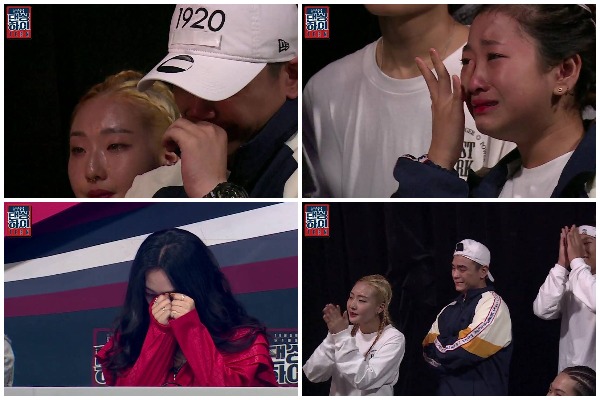 Coach Seung Hoon thinks carefully as he is torn between Oh Dong Gyo and Ye Ju Hee. He chooses the former as he is impressed with his emotional performance. 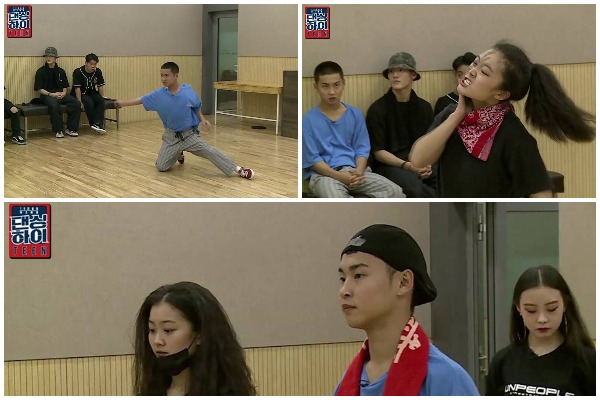 Dong Gyo, before starting his performance, apologizes for his song choice. “Would You Go” by Eun Hee Ji tackles a sensitive topic. The song is a soundtrack from the movie Spirits’ Homecoming which tells the stories of Comfort Women during the Japanese occupation of Korea.

The judges praised him for his performance and all agree that he managed to convey the song’s message. However, Ha Hui Dong points out that waacking (a form of dance that involves movement of the arms over and behind the shoulders) did not suit the song and J-Black mentions he needed proper training to be able to execute well. His performance scores an average score of 91.

During the team’s rehearsal, Gikwang worries about Moon Seung Shik as he freestyled to Hangzoo’s “Red Sun”. He missed some beats so Gikwang advises him to relax, contain his energy and as much as possible rehearse the moves. However, on the dry rehearsal, the coach changes his mind and tells Seung Shik to just do his thing.

Moon Seung Shik starts krumping to the beat and his moves electrified the crowd. But the real scene-stealer is his perfect execution of his shoe trick. He recalls that his attempts to do shoe tricks on the first episode were total failures, so he is proud that he did it this time.

The judges are also impressed. They praise his energy with Honey J commenting “the balance between his inner and outer energy is perfect”. He manages to secure 94 points, the highest among the performers.

Kim Ye Ri impresses his teammates and Coach Lia Kim during the interim evaluation. With her moving interpretation of Lee Hi’s “Breathe”, Lia Kim wonders why she is in deep pain at such a young age.

She tells her coach that due to her hearing impairment, she finds it hard to communicate. Thus she became an outcast. Even if she is with friends, most of time she kept to herself. Thinking about her struggles to socialize is the basis of her painful emotions.

After her presentation, she is overwhelmed with emotions, and so are her fellow contestants and a few members of the crowd. Moon Hee Jun applaud her courage to experiment and Honey J adds that it is a stable performance. J-Black admires her b-boying skills. While Ha Hui Dong comments that her footwork does not fit the music and he saw expected moves. Regardless of the predictability, the judge still praise her for the touching number. She gets the second highest score which is 93.

The youngest member of Team Hoya, Jung Se Hyun felt pressured to represent her team. A few days prior to the competition, she breaks down and almost gave up. Hoya encourages her and convinces her she can do it.

Garb in a teddy bear onesie, she starts dancing cutely to the children song “Three Bears” before switching music to “Heard It Through the Grapevine” by Kiha and The Faces.

Her performance failed to wow the judges with Moon Hee Jun saying he is confused about the concept. Judges Honey J and J-Black remark on her skills being not quite up to the standards. Hui Dong says that he is looking for something unexpected but did not see any. She scores 86, the lowest average among the performers.

After deciding to have the boys perform a 1-minute audition,Team Just Jerk chose Kim Min Jae as their ace performer. 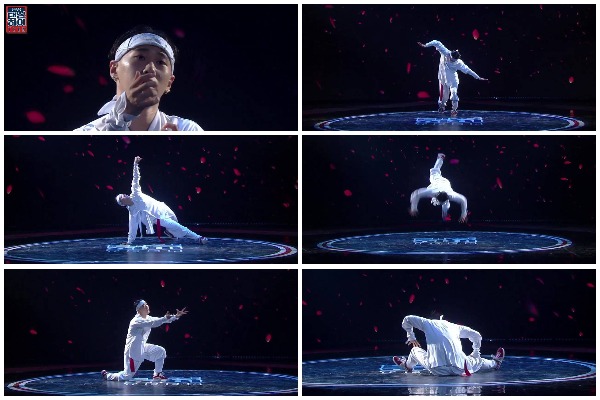 He delivers a poignant interpretation of Lee Sun Hee’s “Fate” which left everyone, including his mentors in tears. The crowd is even more touched as host Doni (Jeong Hyeong Don) announces that his performance is inspired by her mother, who is currently ill. He also cries as he wished for his mother to be well, so she can watch him in Dancing High Teen.

Moon Hee Jun and J-Black commend his concentration and the way he sustained the tension in his solo stage. Ha Hui Dong remarks that for him it is the best performance. He secures the third highest mark with the score of 92. 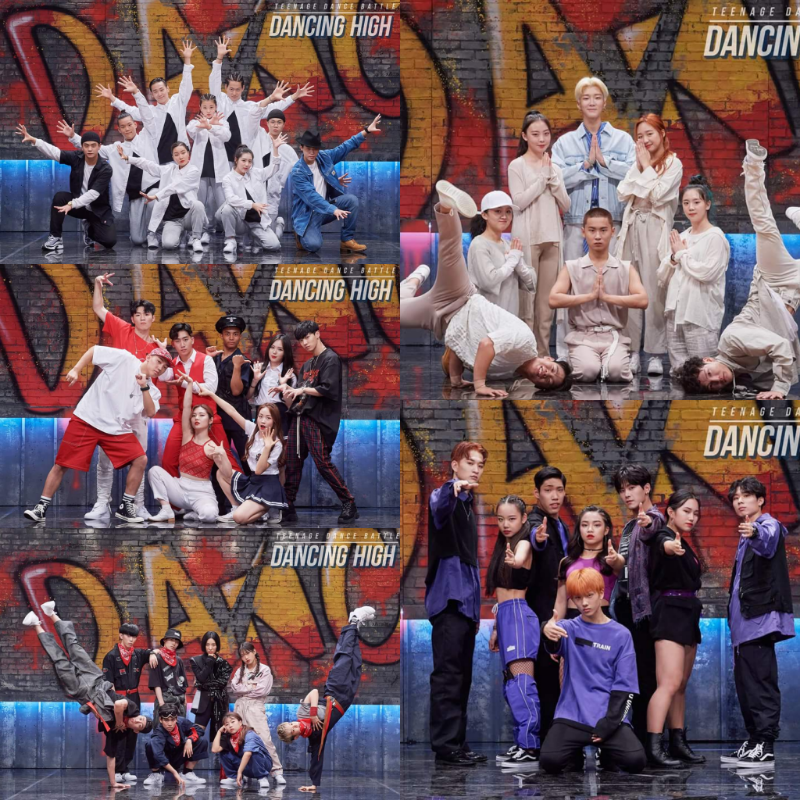 With the performances done and aggregate scores calculated, it’s time to announce the winner of K-wave dance battle. Team Hoya gets a total score of 320 points relegating them to third place. While Team Just Jerk secures the second spot with 323 points. The eventual winner, Team Gikwang bags a total of 327 points.

Next week’s episode shows the teams battle it out street dancing style.

Who do you think will conquer the third battle stage of Dancing High?