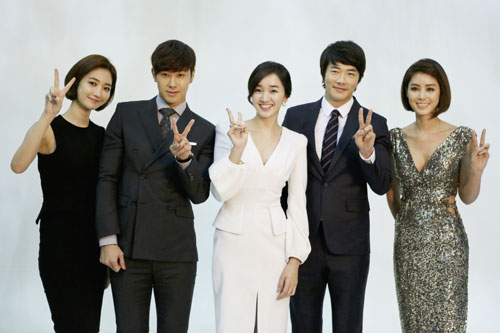 Drama cast of ‘Queen of Ambition’ poses with V-sign

The main cast for SBS Monday-Tuesday series Queen of Ambition‘s photo at their poster photoshoot has been drawing attention. On December 10th, SBS’ production center studio worked on the poster photoshoot for the upcoming drama Queen of Ambition along with producing of the main teaser video. With the main actors and the production staff, a total of 60 people worked on these few projects from 8am until 10pm of that same day. Despite the long hours of work and how tired they all must have been, they had warm smiles and appearances.

On this day, Kwon Sangwoo received many applause from the staff as he acted out perfectly of a character of anger and regret for his love and expressed the emotions of a complicated love hate relationship. After that, Kwon Sangwoo and Soo Ae worked on their couple photoshoot.

On the other hand, Queen of Ambition is about the story of a very poor woman who wants to take off the clothes of the poor and has a dream to become the first lady (played by Soo Ae), and about a innocent man who sacrifices every thing for that woman (played by Kwon Sangwoo).