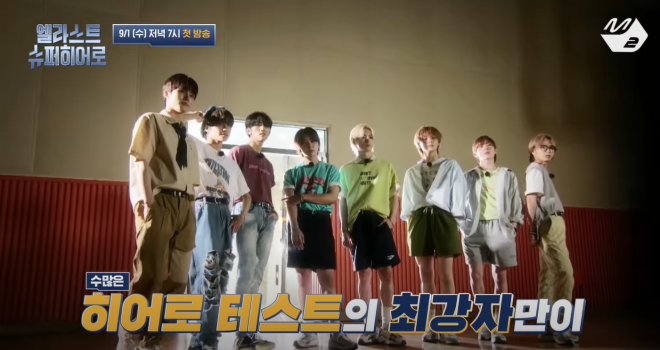 The boy group is back as eight in a new project to captivate fans’ attention with. The idols will be the stars of Mnet M2’s new reality show E’LAST Superhero.

On August 18, a trailer for the entertainment program was revealed, drawing attention from the group’s fans. In the clip, the performers already shined with their colorful personalities, receiving positive cheers from viewers.

E’LAST Superhero is a special reality show which will put the members against each other, competing for the title of “superhero”. They will complete missions while showing their unique charms and sense of entertainment.

E’LAST is an eight-member boy group who made its debut on 9 June 2020, with the mini-album DAY DREAM and its title track “Swear”. The artists grabbed the attention with their different music style and performances that look like a whole spectacle. Also, each member shined throughout their releases so far, leaving fans wanting to see more of the talented octet.

Earlier this year, the group introduced its first sub-unit, E’LAST U, comprising of members Choi In, Romin, Seungyeop and Wonhyuk. They released the digital single Remember and presented a different, yet still captivating appeal through the title song “The Beginning of Spring”.

Now, the boys will showcase different charms through E’LAST Superhero. The new program will broadcast its first episode on September 1 at 7 PM KST on Mnet. The full episode will be available on the same day, at 8 PM KST on M2’s YouTube channel.