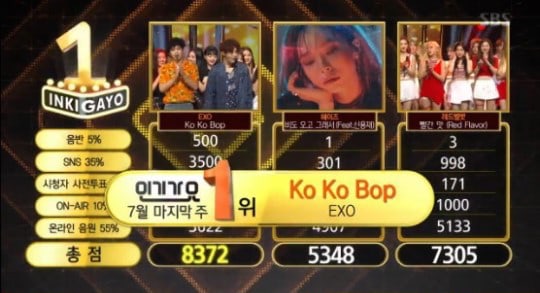 After all the renditions, the last three candidates for the honorable trophy were identified. They were none other than EXO, Red Velvet and Heize.

With 8,372 votes, the boy group of SM Entertainment edged out its two competitors to grab the first spot at the music show, with its new track dubbed “KoKoBop”.

It is noted that this is not the first time the band won the trophy for its new song on a TV show.

Earlier on, the boys also overwhelmed many strong competitors to secure the top position on other music programs, namely Show Champion, M!Countdown and Music Bank.

Hellokpop, as an independent Korean entertainment news website (without influence from any agency or corporation), we need your support! If you have enjoyed our work, consider to support us with a one-time or recurring donation from as low as US$5 to keep our site going! Donate securely below via Stripe, Paypal, Apple Pay or Google Wallet.
90
SHARES
FacebookTwitter
SubscribeGoogleWhatsappPinterestDiggRedditStumbleuponVkWeiboPocketTumblrMailMeneameOdnoklassniki
Related ItemsCNBLUE’s Jung Yong HwaEXOKARDKNKKoKoBopLABOUMMYTEENRed VelvetShannonTurbo
← Previous Story K-Drama Premiere: Lee Jun Ki And Moon Chae Won Track Serial Killers With Their “Criminal Minds”
Next Story → When Park Seo Joon Was Still A Shy Teenager: “I Could Not Even Order Food At A Restaurant”