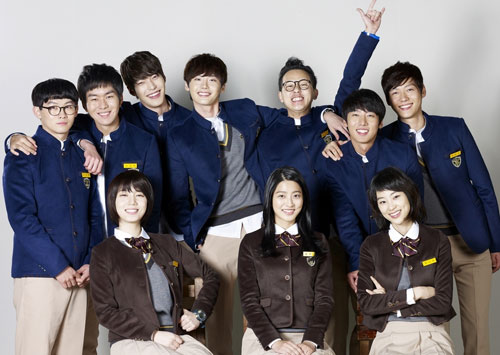 The new Monday-Tuesday drama KBS2TV is producing, is titled School 2013. The production team has revealed the first photo of the actors together.

It has been said that the first episode is scheduled to air in December. The drama is based on the theme of Seungri High School (Victory High School), and the students of second year, room 2 . The photo revealed had those students in a group wearing their uniforms.

The group photo showed cast members Lee Jongsuk, Park Se-young, Kim Woo-bin, Ryu Hyo-young, Gwak Jung-wook, and many others as friends. The actors in the school uniforms made it feel as if they were real high school students and has started drawing attention from the general public.

One of the representatives of this drama said, “we made the uniform for Seungri High so that it feels real and that through this drama, viewers can feel some reality in it. Since student actors are part of it, the production staff felt like we were looking at a real Seungri High School group of students.”

The friends of 2nd year class 2’s first broadcast of School 2013 will air December 3 on KBS2TV.