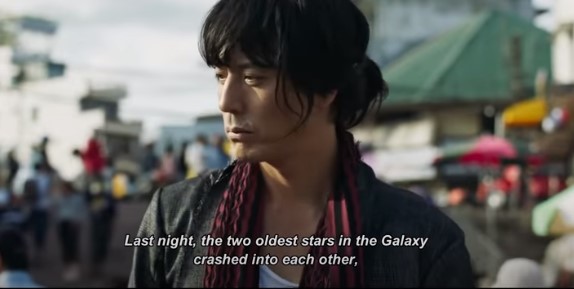 Seeing the hard work of the production crew and to rescue this Vietnam-Korea project, Vietnamese actress Ly Nha Ky stepped up by herself to financially support the movie.

On June 12, Vietnamese actress Ly Nha Ky officially announced the confirmation of her big screen comeback through the new movie titled Secret Of Paradise, in which she co-stars with Korean actor Han Jae Suk. Along with the announcement, she released a trailer to let the viewers have a glimpse of what to expect from the fantasy movie.

Starting with a traffic accident, the trailer reveals an extraterrestrial energy that sets the theme direction, building the climax and the mysterious intertwining romance between the couple Thien Di (Ly Nha Ky) and Quang Kha (Han Jae Suk). The couple loved each other dearly but Thien Di suddenly died in a car crash that devastated Quang Kha.

A year later, due to the extraterrestrial effect of the universe, Quang Kha was able to connect to people in the past. He decides to make use of the unusual ability to learn about the accident and help his wife to avoid the tragic fate.

The word “paradise” in the trailer implies both happiness and death.

Secret Of Paradise reportedly first began its shooting in 2018. However due to financial problem involving the original producer, the production was unfortunately halted.

In mid-2019, the female lead Ly Nha Ky made the financial decision to take over the movie production. She then invited the male lead Han Jae Suk and director Park Hee Jun to return back to Vietnam to continue the project.

One year later, the production was finally completed and scheduled to premiere on July 24.

The film marked the return to the big screen of Ly Nha Ky after six years, since Cold Summer, directed by Ngo Quang Hai. More recently, she has made headlines for investing in art films such as Angel Face (Cannes Film Festival 2018) and Non Fiction (Venice Film Festival 2018). The female star reportedly had to cancel her plan to attend the 2019 Cannes Film Festival in order to complete the filming of Secret Of Paradise on time.

Secret Of Paradise will premiere nationwide in Vietnam on July 24.