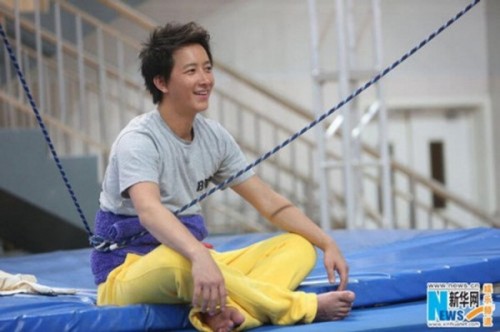 Hangeng, an ex-member of boyband Super Junior, has been injured while on a diving lesson. A video, played during the recording of the show Stars in Danger: The High Dive, reveals Hangeng’s accident in the diving pool.

In an attempt to perform his stunt from a 3-meter springboard, a bad fall on the water injured his mouth palate which caused him to bleed and faint. About five to six members of the crew rushed to pull him out of the water.

It was the first time that Hangeng saw the video and he said, during the recording, that he will not give up. Instead, he will practice more, despite the difficulty of training and the proneness to accidents of the sport.

The video caused the fans from the audience to tear up while the members of the crew and his diving coach were touched by the fighting spirit and determination of Hangeng. His training coach said that diving is one of the most dangerous sports and seeing Hangeng full of spirit shows the quality of a professional athlete.

Stars in Danger: The High Dive is a franchise of the Jiangsu Satellite Channel from Banijay International. The original format gives crash courses in diving to celebrities and will be taped in front of a live audience on an Olympic-sized swimming pool.