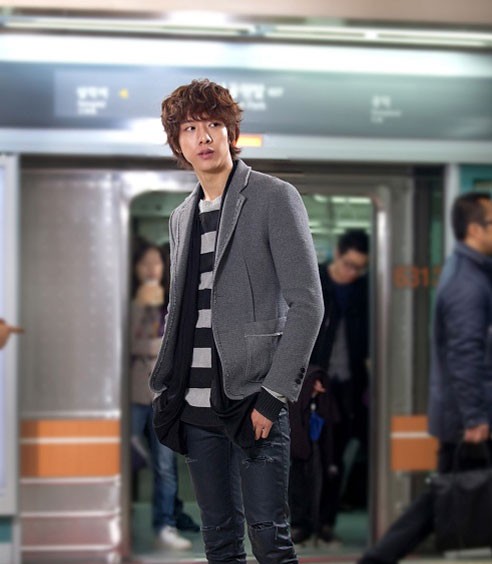 CNBlue’s member Lee JungShin is receiving much love and attention from the ajumma (mothers) fans for portraying a cute, young male character on the drama My Daughter, Seo Young.

On KBS2’s Weekend drama My Daughter, Seo Young, he plays the role of the youngest son, Kang Sungjae who has a lot of aegyo (cuteness) and has a warm heart. This character has stolen the hearts of ajumma viewers.

In one scene, Lee Jung Shin’s character serenaded his mother Cha Jisung (played by Kim Hye-ok), with a guitar playing before melting the hearts of older viewers when he said “Mom, thanks for marrying dad. I’m really happy that you are my mom.”

Lee JungShin said that he was being recognised more for his character than being the bassist of CNBlue. “I’m very thankful to the ajummas who recognize me, it’s still very interesting to me. The character Kang Sungjae is similar to my real personality as well so I get to really focus and enjoy while I’m acting.” He said.

This drama tells the story of a father who separates with his daughter, their love, hate and reconciliation. Seo Young (Lee Bo Young) is a tough woman who tries to escape the harsh life of poverty with a strong passion to gain success, overcome her lower status and rise in society. On the road to fullfill her dream, she cuts ties with her poor family and incompetent father (Chun Ho Jin) who still love his daughter despite her bitterness. (Dramawiki)

My Daughter, Seo Young airs every Saturday and Sunday on KBS2.

Are you currently watching the drama? Tell us what you thought about the drama and Lee Jung Shin’s character!