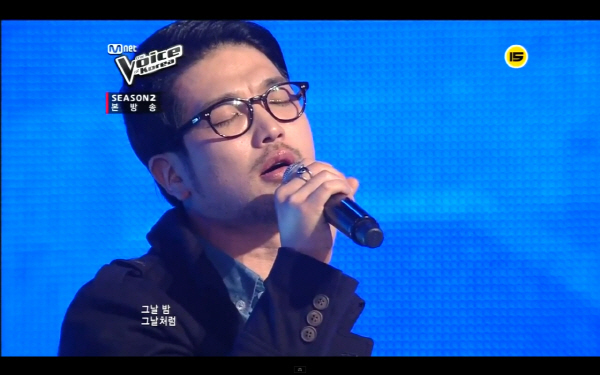 As The Voice of Korea 2 began, contestant Yoon Sung Ki has been drawing attention with his attractive, skillful voice and looks from the viewers.

During the 2nd episode of the audition program, each contestant went through a blind test. Viewers were able to watch the performances, while the judges were seated facing away from the stage.

Yoon Sung Ki introduced himself as rock band HumanRace‘s vocalist and sang Don’t Let Me Cry (날 울리지마), which was originally sung by Shin Seung-Hoon. Yoon Sung Ki performed the song in his own style and was able to impress Shin Seung-Hoon to press the ‘I want you’ button to have his chair turned around in support of the latter.

In the first season of Voice Korea, Shin Seung-Hoon was noted of not hitting the red button for contestants who sung his own songs. Among the contestants, there was a saying that Shin Seung-Hoon’s songs should not be sung in the program. However, Yoon Sung Ki received compliments from Shin Seung-Hoon instead, passed the blind test and joined his team.

The group which Yoon Sung Ki is part of, HumanRace, is known as an indie band, active in Hongdae. So far, they have released one single and two mini albums, and already have earned the hearts of many fans through their live performances in clubs. Voice Korea 2 is broadcast at 11pm KST on every Friday night.

Look out for the powerful contestant Yoon Sung Ki!