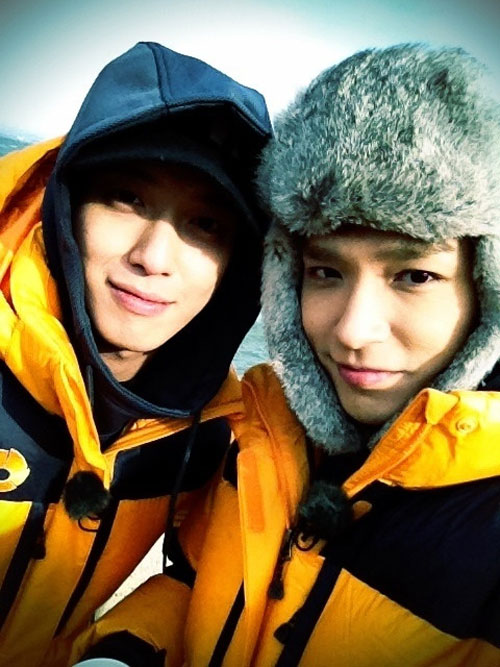 Simon D and Yung Yong Hwa have surprised fans and the media after Simon D confirmed the two stars were from the “same town, same apartment and same high school.”

The photo (as above) pictures the two stars standing head to head, surprising many fans and the Korean media of the unrevealed special friendship.

Simon D and Yong Hwa took the photo on the set of Running Man, which the episode will feature actress Choi Jiwoo, BEAST’s Lee Gi-Kwang and CNBLUE’s Lee Jong Hyun.

CNBLUE is set to make a comeback with their fourth mini-album on January 14.

Hellokpop, as an independent Korean entertainment news website (without influence from any agency or corporation), we need your support! If you have enjoyed our work, consider to support us with a one-time or recurring donation from as low as US$5 to keep our site going! Donate securely below via Stripe, Paypal, Apple Pay or Google Wallet.
FacebookTwitter
SubscribeGoogleWhatsappPinterestDiggRedditStumbleuponVkWeiboPocketTumblrMailMeneameOdnoklassniki
Related ItemsBEASTBusanChoi JiwooCNBLUEJung Yong HwaLee Gi-kwangLee Jong HyunphotoRunning ManSimon DSimonDSupreme TeamTwitter런닝맨비스트사이먼디슈프림팀쌈디씨엔블루이기광이종현정용화최지우컴백트위터
← Previous Story Coming Soon: 2013 Super Asia Showcase
Next Story → Rookie group Pure supports TVXQ’s reunion; ‘Standing Together’ video released