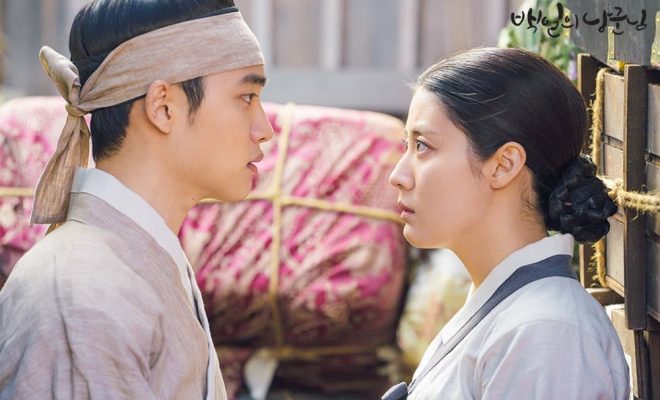 Looks like tvN is ending the drought of notable sageuk dramas for the past few years with 100 Days My Prince!

Unlike your typical sageuk dramas which center on melodrama and action, 100 Days My Prince makes use of humor and romance as its selling point. With its unique, comic take on a genre that often leaves many with a heavy heart, plus the charisma and chemistry of its leads, EXO’s D.O. as Crown Prince Lee Yool/Won Deuk and Nam Ji Hyun as Hong Sim, it is no wonder that many are royally hooked on this new sageuk in town. 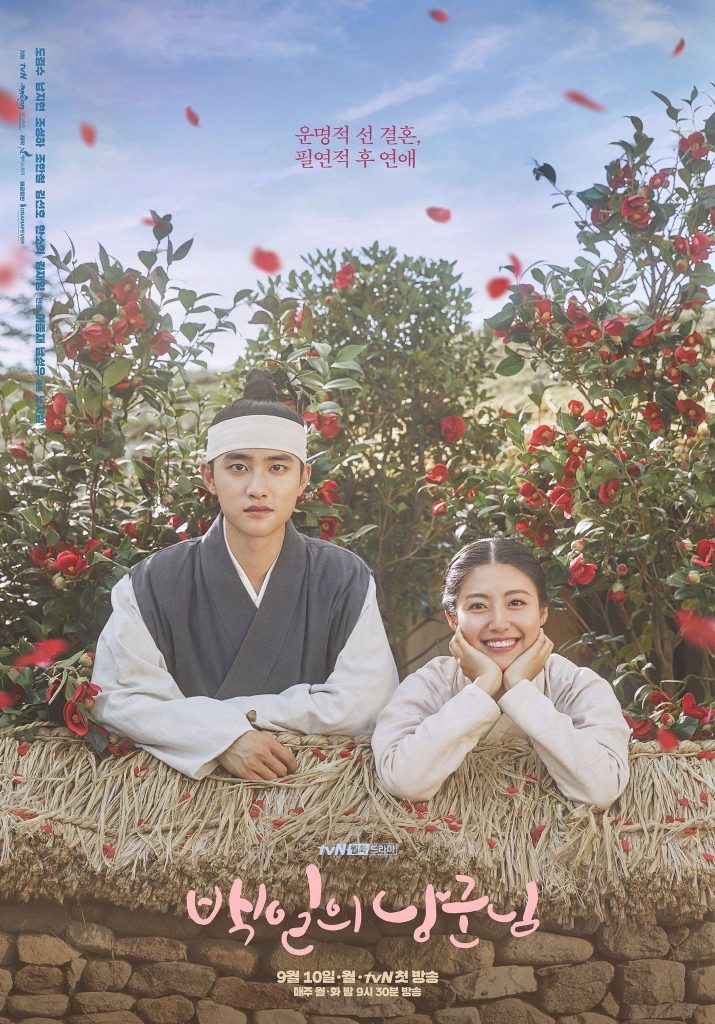 Joseon’s Crown Prince Lee Yool, who barely remembers a thing after he escapes from an assassination attempt, finds himself assuming the identity of Won Deuk: a supposedly non-existent commoner who serves in the military. Hong Sim’s father, who discovered his body in the woods, convinces Lee Yool that he is Won Deuk to save Hong Sim from both being beaten at the capital and being betrothed to the minister as his fifth concubine.

His sudden appearance astounds the entire village. Especially Hong Sim, who now has to marry him after declaring him as her fiancee during the heat of the Crown Prince’s order for spinsters in Joseon to be married before the month ends. However, Won Deuk refuses to marry Hong Sim once he sets his eyes on her and even attempts to run away, giving Hong Sim a premonition of how hard it would be to live with him. 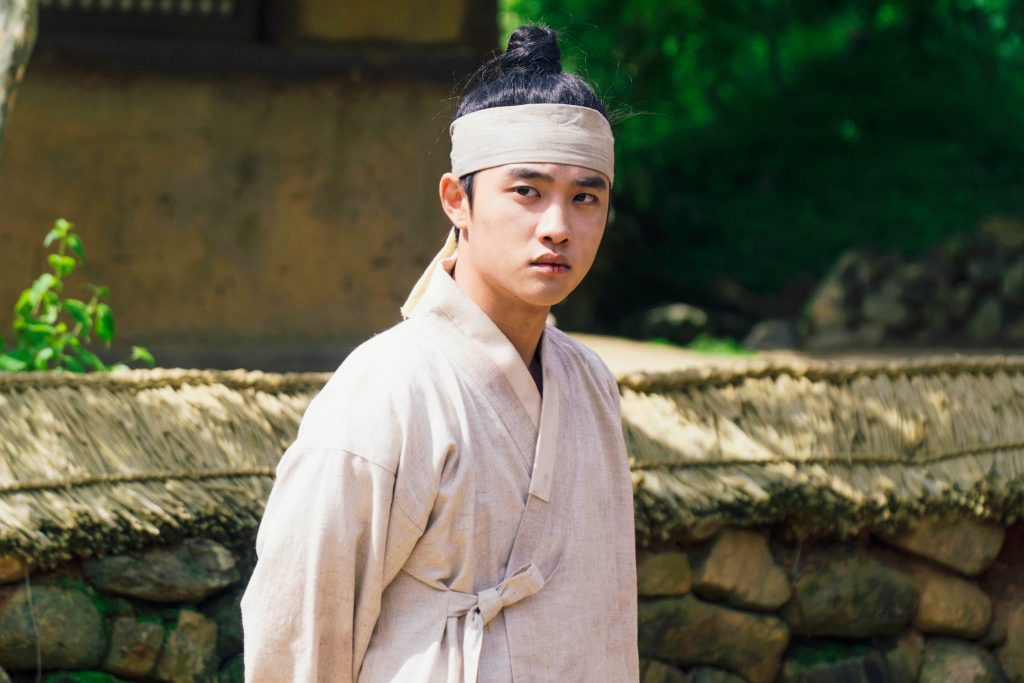 Their marriage pushes through after Hong Sim manages to convince Won Deuk by telling him about the minister’s insistence to make her his new concubine. Won Deuk takes pity on her and agrees. Because they are the last spinster and bachelor in the village, their wedding ceremony takes place in the capital itself with the entire village witnessing – plus the governor, who visited the village for this special event.

However, Hong Sim realizes that married life is not as easy as it seems. Furthermore, she might just have gotten herself into a bigger mess. Won Deuk’s loss of his memories renders him incompetent compared to the rest, and he makes mistakes and impulsive decisions which bring him trouble. In fact, he even gets fooled into signing a deal with the village’s biggest loan shark. Thus, he is giving Hong Sim the biggest headache ever as she tries to figure out how to pay it back.

She tries to get Won Deuk to do physical labor but the amnesiac Crown Prince who must be used to having servants do as he wishes at his disposal miserably fails at every task she gives him. 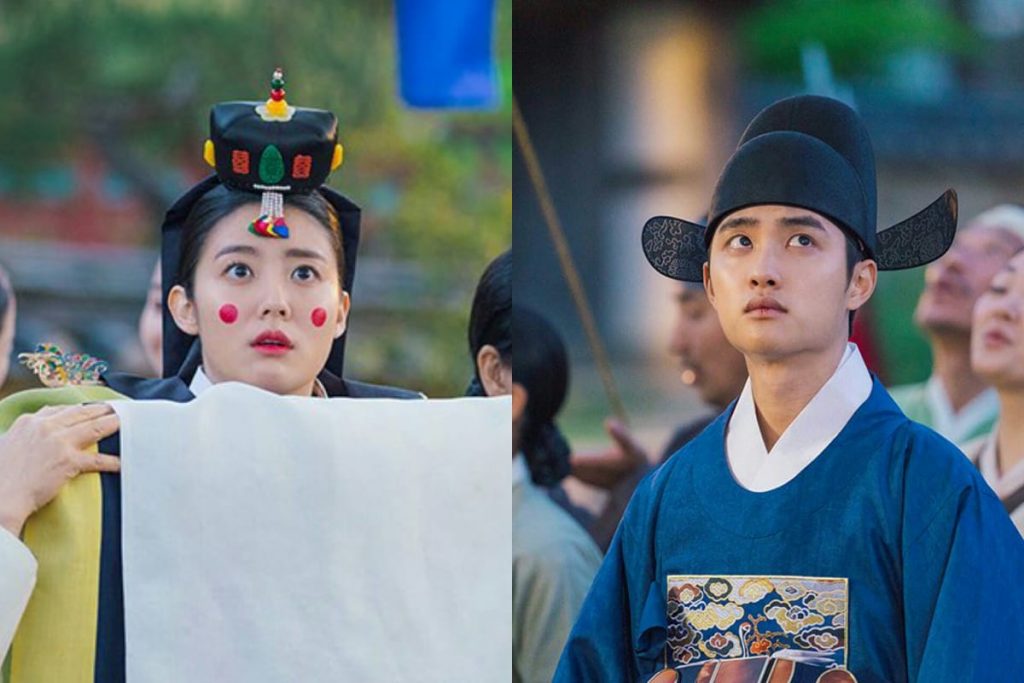 While climbing up Mount Chunwoo to fulfill a task, Won Deuk suddenly gets flashes of his memories as he looks around the familiar place. The mountain, where the attempt to assassinate him took place, triggers his memories and makes him collapse. Hong Sim and her father end up taking care of him as he remains unconscious, adding to their problems even more.

He awakes and faces the loan shark and the government at the capital, where they ask the magistrate to get Won Deuk to pay them back for his debts. Hong Sim tries to get him absolved of his debts by saying that he’s mentally unstable, and the other villagers agree to it after witnessing Won Deuk’s display of “incapability to do things properly” themselves. However, Won Deuk takes this as an insult and refuses to let himself be absolved of his debt, as doing so would be like him admitting that he truly is good for nothing.

Hong Sim is infuriated at how Won Deuk’s pride seems to be more important to him, and the married couple has a stand-off against each other. During an event at the capital, Won Deuk shows up on his own to work in exchange for food. However, an incident which leads the kind-hearted Hong Sim to stand up for her fellow villager against the magistrate makes Won Deuk step up and speak against the magistrate, as well. 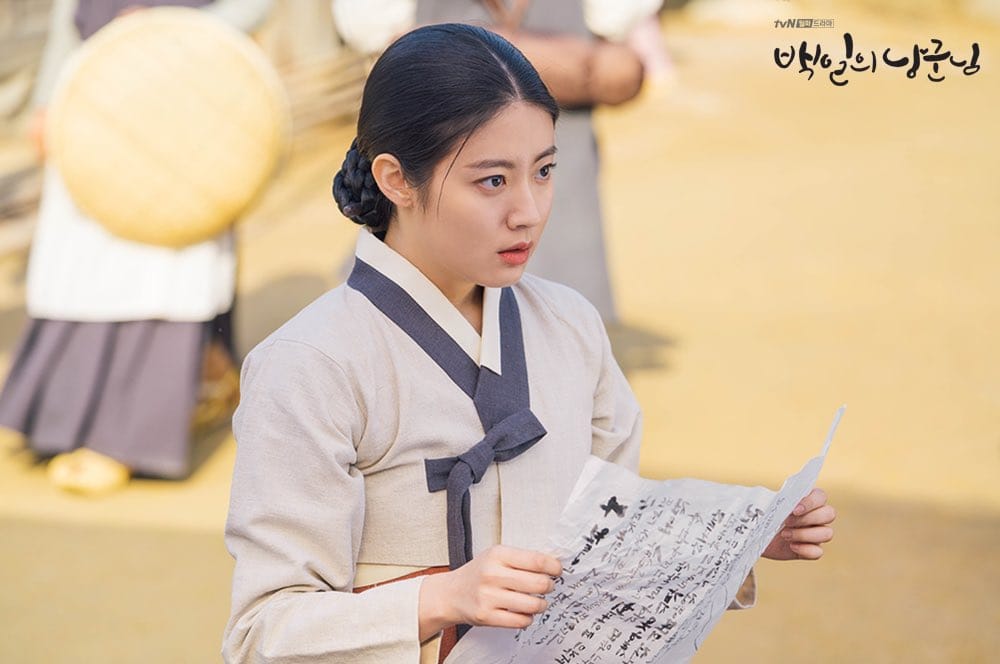 The magistrate, who recited a poem earlier in the event, gets insulted by Won Deuk for being proud of a poem which could be written by a child. The angry magistrate then challenges Won Deuk to recite a poem better than his. And much to everyone’s amazement, Won Deuk manages to do so.

When they get back to Hong Sim’s residence, Hong Sim expresses her astonishment over the fact that Won Deuk is actually literate. She then suggests that they use his literacy to transcribe books, and the couple ends up making money from it. Villagers also start praising Won Deuk, taking back their earlier statements and opinions of him being a man who is good for nothing.

The husband and the wife also start developing feelings for each other, especially Won Deuk who confesses that he may or may not have felt jealousy. He also worries about her when she disappears without saying a word, finding out later that she ventured into town for her monthly visits during the fifteenth day of every month. 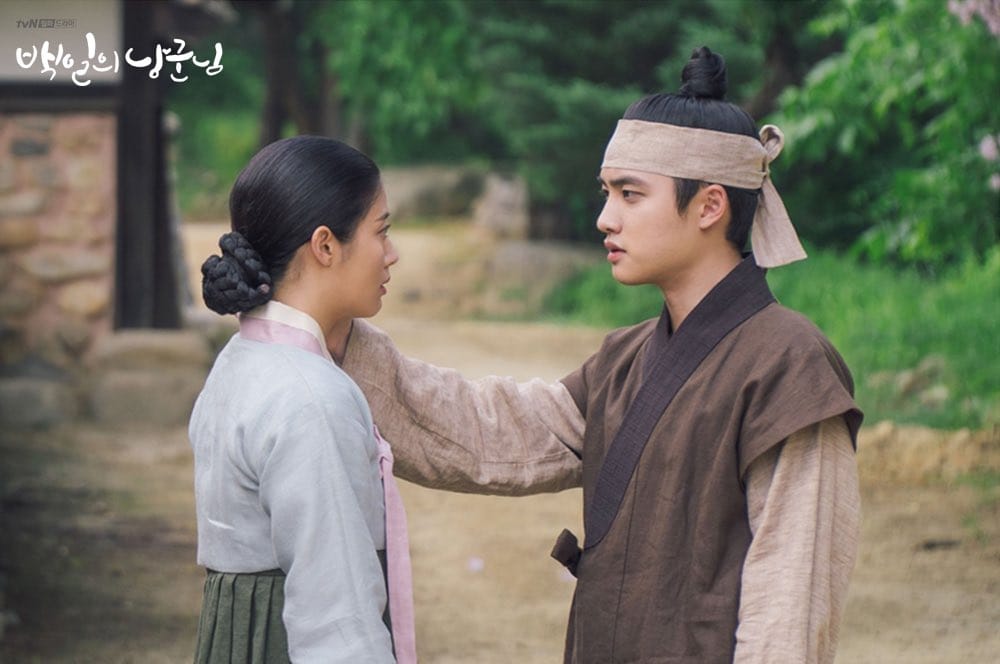 On Hong Sim’s visit, she meets the young general Jung Je Yoon (Kim Sun Ho) once again. Jung Je Yoon, who had been actively piecing together the information about Crown Prince Lee Yool’s disappearance, specifically took time off from his thorough investigations at the palace in hopes of meeting Hong Sim once again. This is giving us intense feels as we try not to get the second lead syndrome once again.

He still shows interest in her and even tells her that he had set off a paper lantern in her name. When the paper lantern successfully reaches the sea, the wish written on the lantern would be granted, and he wished that she would get to finally reunite with her brother.

The wish comes true when Moo Yeon (Kim Jae Young) comes into Hong Sim’s village. Moo Yeon, who serves Kim Cha Eon (Cho Seong Ha) and was the person behind Lee Yool’s assassination attempt, is actually Hong Sim’s long-lost brother. They run into each other and Hong Sim catches him despite his initial denial of being her brother. 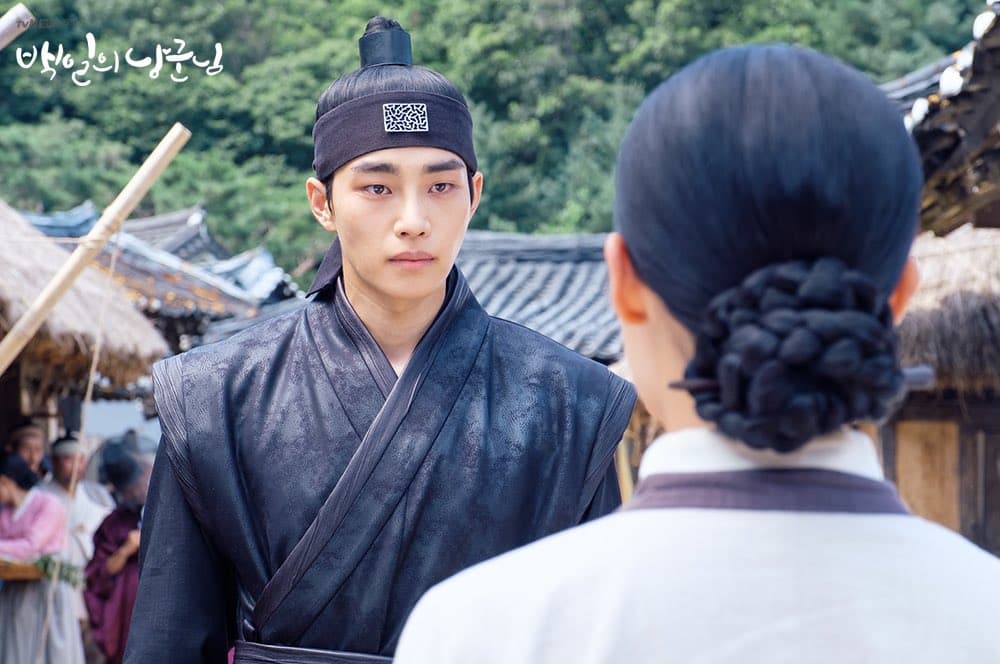 Hong Sim, who is overjoyed by the fact that her brother is not dead, begs him to stay. He tells her that he has business to finish, and therefore, he cannot stay with her for now. Little does Hong Sim know that her brother’s business is to pursue her now-husband Won Deuk down and kill him after Cha Eon found out that it wasn’t Lee Yool who was found dead in Mount Chunwoo.

Won Deuk witnesses Hong Sim and Moo Yeon’s interaction and mistakes Moo Yeon for his wife’s former lover. He gets jealous once more and tries to win Hong Sim’s heart, even getting advice from Goo Dol (Kim Ki Doo). However, he gets into a fight with her once again, and she ends up drinking despite alcohol being banned due to the news of the Crown Prince’s death.

In Hong Sim’s drunken state, she reveals to Won Deuk that the man he saw her with was her brother who she had not seen for a very long time. This eases Won Deuk’s heart, and the developing romance between the couple starts shining brighter from this point forward. 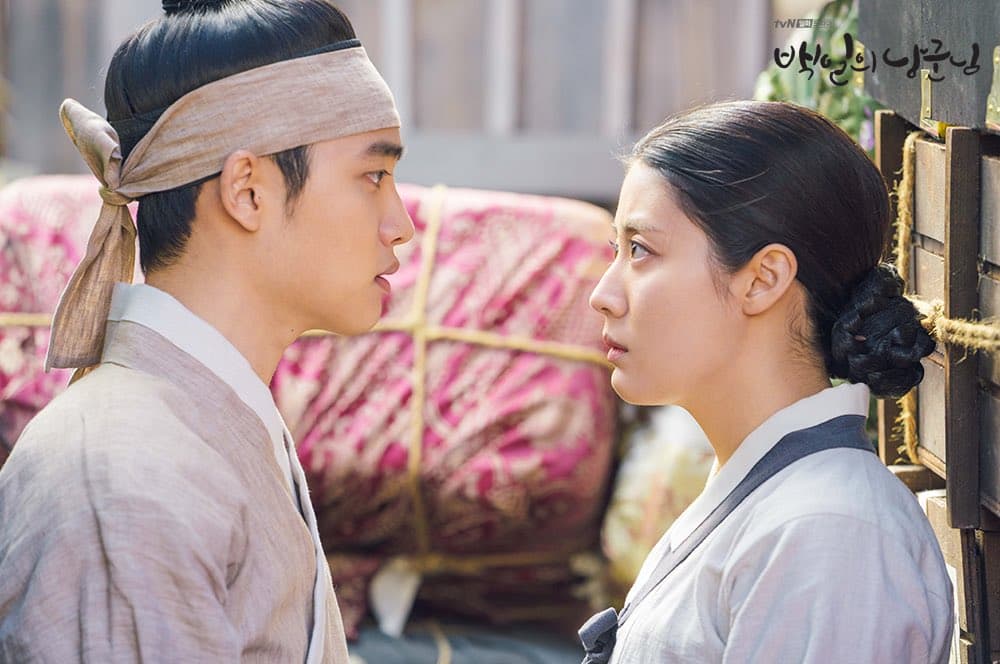 A light and refreshing sageuk

The drama’s comic take on a stern crown prince doing a complete turn with his personality when he loses his memories and finding himself bound to a marriage with a woman he barely knows is pretty rare for the genre. It successfully draws in viewers who are up for this “something new” that 100 Days My Prince can offer with its light and feel-good story.

Add this to EXO’s D.O. (or Do Kyungsoo, as he is more known with his real name in the acting industry) and Nam Ji Hyun’s excellent chemistry as Lee Yool/Won Deuk and Hong Sim and you’d get a sure reason to keep on watching out for the drama’s next episodes. We love seeing the two together on screen, whether they’re bantering or being sweet to each other. Plus, their characters seem to bring out the best of each other’s charisma. 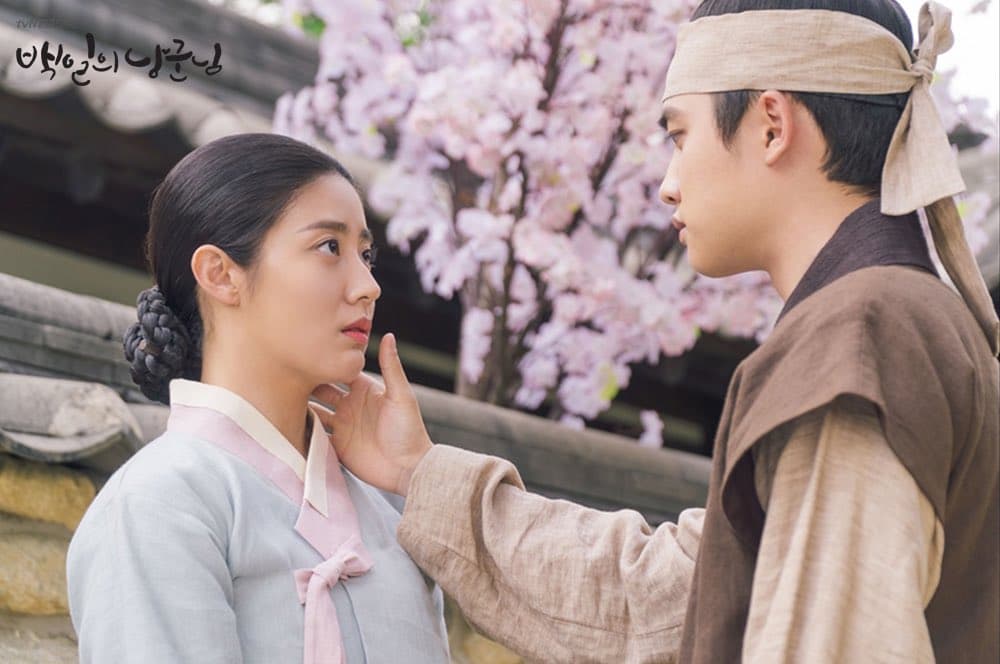 Their dynamic does not seem forced, which makes every sweet scene between them – no matter how big or small – very heart-fluttering. Individually, Do Kyungsoo and Nam Ji Hyun are both very reliable leads who can take on both the light and happy scenes and the dark and sad scenes really effectively. We’re looking forward to seeing more of the latter (despite how our hearts would feel) as the drama picks up its action.

One thing’s for sure – we’re definitely getting a second lead syndrome over Kim Sun Ho’s character Jung Je Yoon! He’s just way too sweet and nice to Hong Sim, and his sincere drive and determination to uncover who is behind Crown Prince Lee Yool’s assassination warms our hearts. 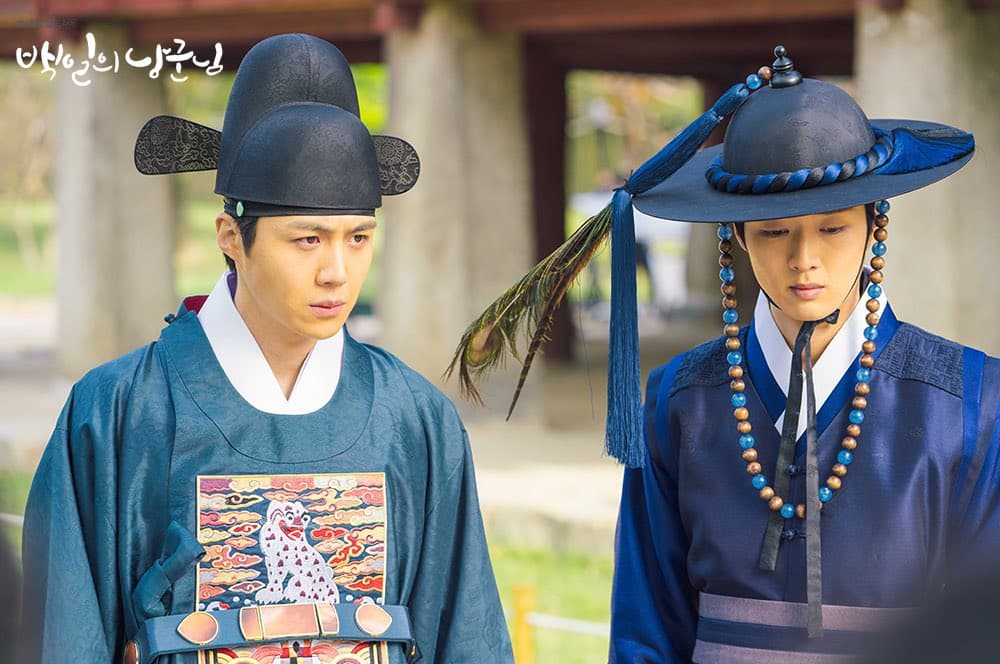 For some reason, we are also rooting for Moo Yeon – Hong Sim’s brother – to switch sides once he finds out about Hong Sim and Won Deuk. Although we don’t know his intentions for serving Kim Cha Eon yet or whether he harbors grudges against Crown Prince Lee Yool, he seems like a good man, so we hope he gets out of the dark side.

Overall, the storyline, the acting, and the warm and light feeling 100 Days My Prince offers has kept us hooked on its first half. Thus, we’re hoping for these factors to stay consistent for the show’s remaining episodes. We are already in love with its story and its characters – from its leads to its background characters – and we can’t wait to fall for them even deeper.

100 Days My Prince airs on tvN every Monday and Tuesday.

Are you hooked on 100 Days My Prince too? Let us know by leaving a comment below, giving us a holler on Facebook, or tweeting us at @hellokpop!