Tunnel feels like a three-part theme park ride, where the Grand Viking opens the course with its stable and exciting momentum before surging to a heart stopping Roller Coaster ride, and finally plunging to oblivion inside the gravity defying Gyro Drop.

A detective from 1986 is transported 30 years after to solve a serial murder case that has a connection to the killing outbreak he was investigating in the past. This superb cop drama premise gives an exhausting ride as you feel the frustrations and high moments of the detectives trailing the clever villains. 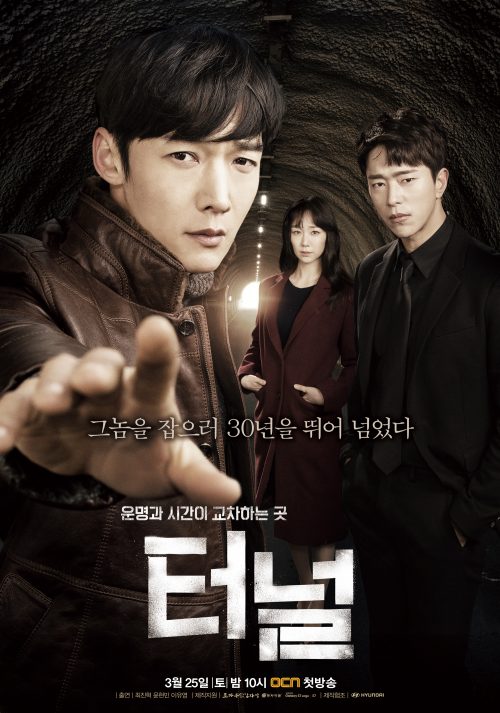 In 1986, detective Park Kwang Ho (Choi Jin Hyuk) from Serious Crime Unit of Hwayang Police station probes on a series of killings, targeting women who are marked with strange dots on their ankles. The detective stumbles upon the culprit inside a tunnel where one of the victims was found.

But he loses consciousness when the psycho smashes him with a heavy rock. He wakes up and realizes he has time-traveled 30 years forward to 2016. Fuzzy at what happened to him, he assumes the identity of a police officer, who has the same name as his.

He attempts to go back to his year many times by running inside the mysterious tunnel, but to no avail. He decides to work with present Hwayang Serious Crime Unit to find his wife’s whereabouts, while solving the serial killings that might help him to return to his time. 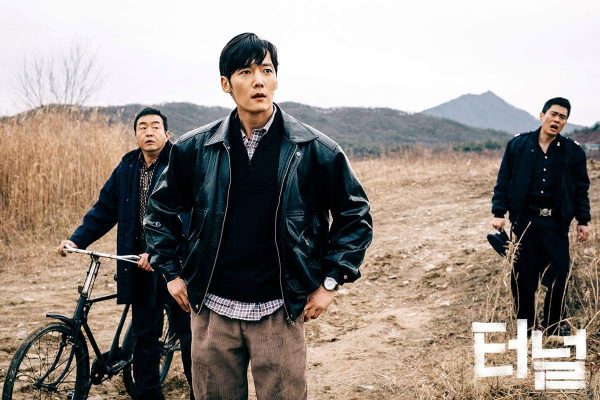 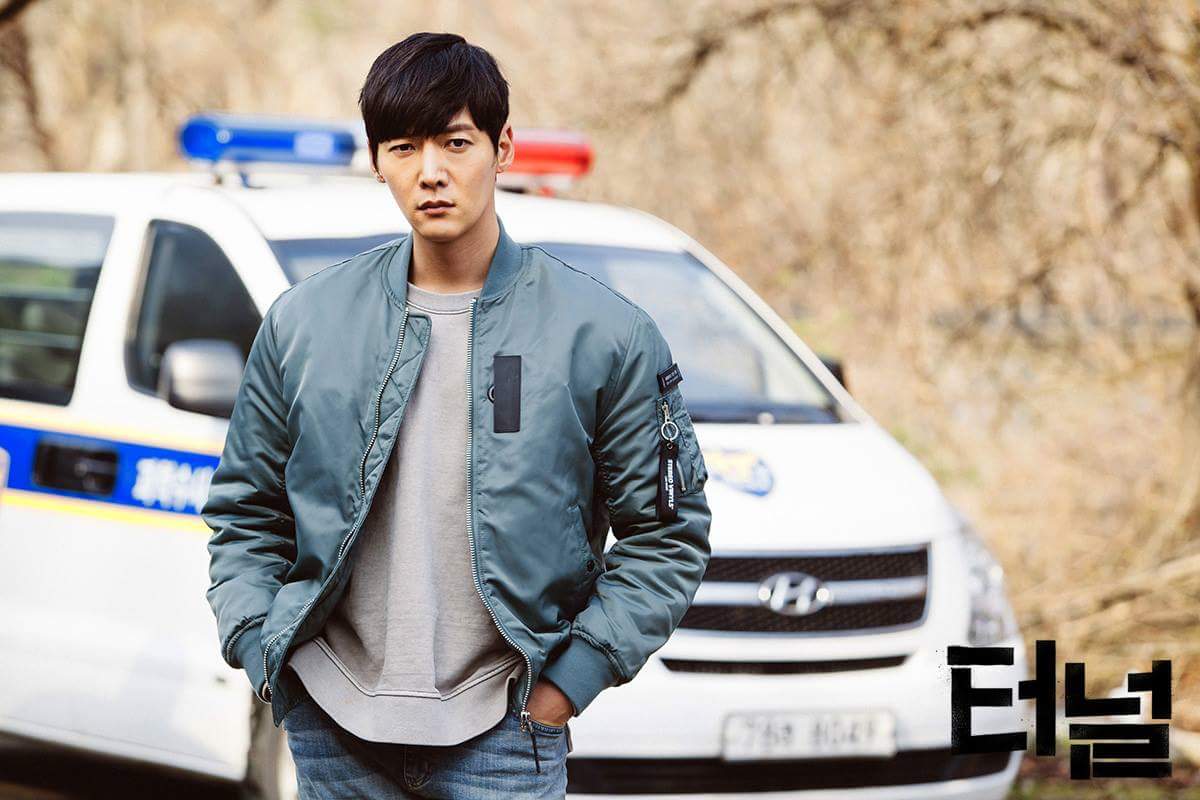 His junior Sung Shik became a chief in the present timeline, and has been helping him solve his perplexing case. But his partner detective Kim Sun Jae (Yoon Hyun Min) catches up with their lies while they are laboring on the missing police officer Park Kwang Ho.

Chief Sung Shik backs up Kwang Ho’s revelation that he is a man from the past and shows their old picture, but Sun Jae won’t concede to their bizarre story. Sun Jae’s father enters the picture as he steps in the police station and recognizes Kwang Ho who worked on his wife’s murder case.

Sun Jae joins Kwang Ho’s secret circle and when the team solves an arson case, Kwang Ho finds a picture of his wife in one of the houses. He learns of his wife’s unfortunate car accident and missing child. 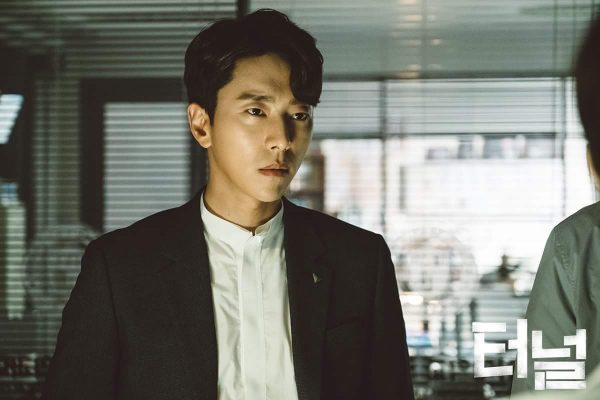 Meanwhile, women-slaying starts happening again with a variation from the previous victimology of the pin-pointed psychopath. It makes the resident profiler and psychology professor Shin Jae Yi (Lee Yoo Young) believes that the killer for the two cases is not the notorious murderer Jung Ho Young.

The forensic doctor Professor Mok supports her belief. They both agree how the police won’t catch the culprit by stalking him, but a good bait can summon the villain from his hiding place.

The police unit fails to apprehend Jung Ho Young in his presumed hideout, and belatedly learns of Professor Shin Jae Yi’s dangerous move of volunteering himself to cause Ho Young to come out from his shell. She is successful with her plan, but he knocks her down as the police learn of her dangerous moves and heads to where she has set up the trap. 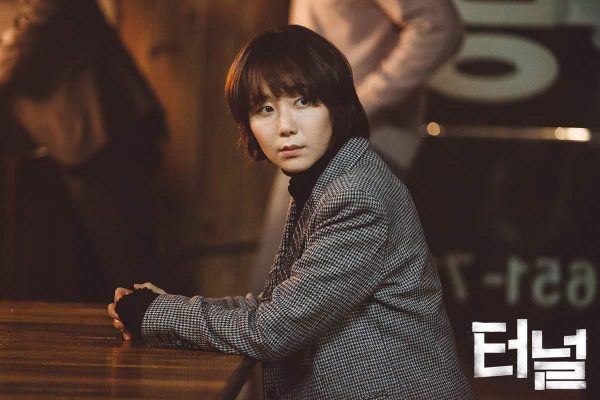 Jae Yi regains consciousness and fights for survival against the vicious psychopath. Just when she is about to collapse, she blows the whistle given by her mother and alerts Kwang Ho to her direction, saving her life in the nick of time.

Sun Jae runs for Ho Young and brawls to death before finally subduing him. Kwang Ho realizes that Jae Yi is his missing daughter through the necklace whistle she used to summon the rescue. Ho Young is questioned, but substantial evidences are needed to pin him down for the crimes he committed 30 years ago and present time.

As time is running out before the prosecution office takes over the case, Sun Jae and Kwang Ho pressures him for another interview. When Kwang Ho mentions the conversation he had from 18-year-old Ho Young who mutilated neighborhood dogs, the psychopath is startled.

It dawns on Kwang Ho that the killer from the past is not the man they have in custody as what Professor Jae Yi insinuated. 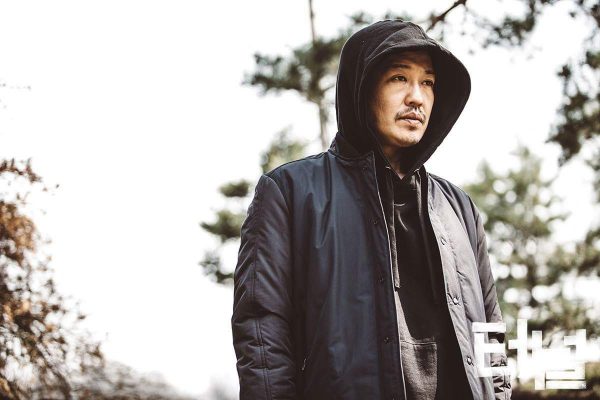 Unbeknownst to them, the autopsy doctor Professor Mok is the serial killer from the past. When his missing victim emerges at present time butchered by Ho Young, his killer instinct resurfaces and streaks on asphyxiating to death the last two victims assumed to be Ho Young’s doing.

Professor Mok overhears Ho Young’s attempt to confess on the killings 30 years ago so upon knowing there is a witness to his crime, the latter pays him a visit. Ho Young ends up committing suicide. There is no will and testimony left by Ho Young but he leaves a small note meant for Kwang Ho that says “Noel”.

Kwang Ho and Sun Jae learn of Mok’s visit to Ho Young before his passing, but he smoothly reverts their interrogation to just being curious, making Kwang Ho starts suspecting him. Jae Yi digs on the case notes to derive the motivation of the dormant killer to have emerged after 30 years, and unveils the connection of the escaped victim and how the killer is in their circle to have known that delicate information.

At that same moment, Kwang Ho figures out the identity of the serial killer from his time and rushes to Mok’s office to confirm it through his fountain pen. 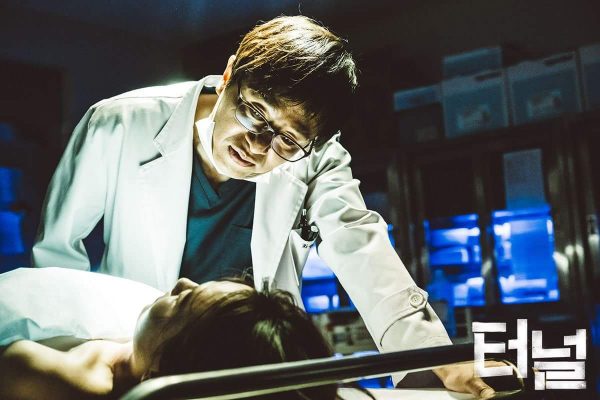 He receives a call from the villain, who knows he has already deduced his identity and orders him to meet up in the tunnel to settle their issues. Sun Jae, who meets Jae Yi, is left with no choice but to reveal why he checks on her identity by telling her that Kwang Ho came from the past, and is in fact her father.

Professor Mok and Kwang Ho scuffle inside the tunnel and along with a powerful thud from a wrestling move, Kwang Ho is again mystically transported back to his time. Kwang Ho works on convincing Mok’s victim who survived, so that she can testify to his sins as the team from the present time traces Kwang Ho’s whereabouts.

He finds young Mok Jin Woo to arrest him, but he runs fast to the tunnel – where he is sent to the future again. 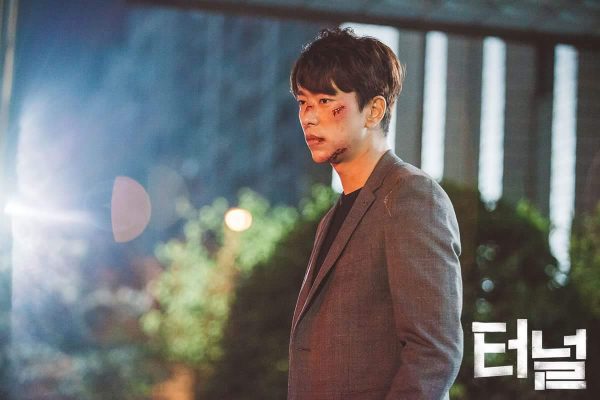 Sun Jae finally connects the dot to Professor Mok’s identity and weeps in frustration how all along his mother’s killer is within his reach. Kwang Ho alerts the team of his return and they arrest the forensic doctor. However due to the lack  of  evidence, he is released by the station chief police.

The father and daughter reunite, not knowing that Mok planted a bug to pry on their movements through a chess piece he gave to Sun Jae. He outwits Kwang Ho’s team and learns that his treasured fountain pen is kept by Jae Yi.

The fountain pen, with an inscription of “Noel”, was given to him by his mother, and it is what he has been using to mark his victims. Kwang Ho fortunately takes it in the past timeline and his wife hid it together with Jae Yi inside her daughter’s stuffed toy.  Jae Yi is then abducted by Mok but successfully rescued by the team. 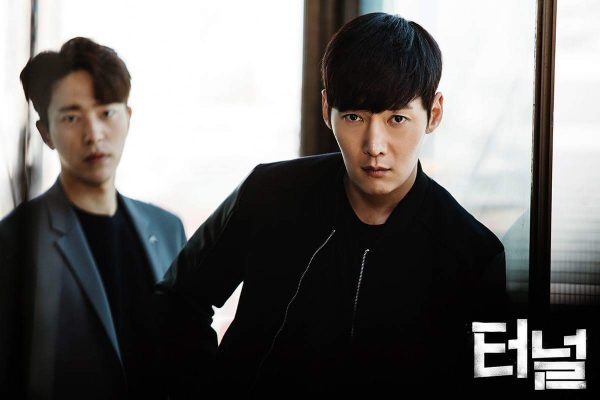 Upon analyzing the villain’s behavior, Jae Yi concludes how she will be the next target. They set a ploy for him to be finally captured. After a series of mind games interrogating the fiend who does not feel remorseful of all his wrongdoings, Kwang Ho and Sun Jae get him to confess to his sins.

Kwang Ho and the team visits the families of the victims to deliver the news that the killer is finally caught, giving them the closure they have been waiting for 30 years.

Kwang Ho returns to his time, helping out a pregnant woman who gives birth to a son, whom she named after the detective who kindly helped her.  Kwang Ho rushes to meet his wife and baby Yeon Ho, who is fondly stared at by the visiting young Sun Jae.

Tunnel executes a neat narrative while connecting two timelines that surround the main conflict. The inventive storyline strategically makes use of the side cases presented to link the time transcending problem that the heroes are trying to solve.

The drama uses small story disputes to unravel the reasons why a 1986 detective mysteriously time-jumps to the present time. While adapting to the new world that the main hero is forced to live, he decodes the junction of the cases he worked in 1986, and the cases happening to them in the present moment.

The revelation of the main leads’ fated entanglement displays one of the highlighted themes of the story – family love, and the lack of it. On the heroes’ side, the filial and unconditional love propels them to seek justice for the affected family members who were victimized by the murderers.

On the other hand, the villains, who were not loved by their families, become inhumane monsters, resolved in justifying senseless killings as a fair deed since life was and will never be good to them. The battle of good and evil is sketched all throughout the chronicle, in a stimulating run that will cripple your heart and drain your mind. 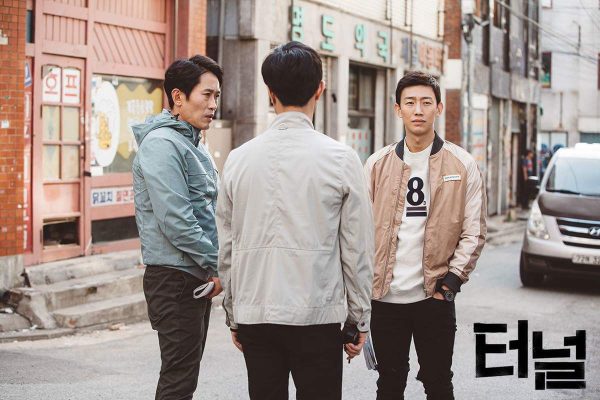 The police team, although quick-witted, is always a step behind the clever villains. On that note, one of the strongest points is how these two creepy villains become each other’s impetus to their killings, which in turn makes everything hard for the main protagonists.

The two-killer plot twist triggers the preparation for an unexpected climax. But just when you think it is already the drama’s highest point, the heroes are disarmed again and settles to convene to where it all began due to the ingenious wicked brain of the anti-hero.

Despite the predictable plot by most viewers, the bends and curves in decrypting the identity of the villains are what mostly made Tunnel an addictive drama exhibit. 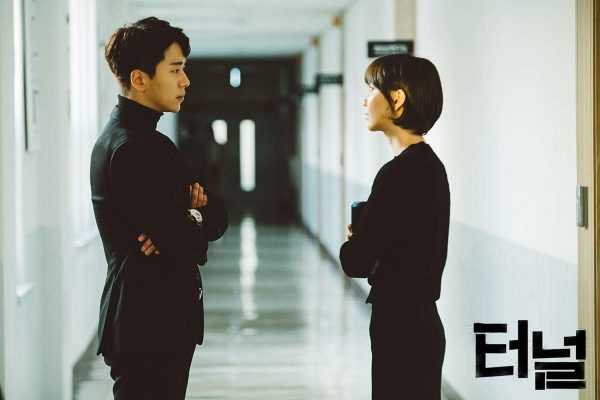 The main villain and the sub-villain depict an allegory of straight wickedness and disguised atrocity. The macabre portrayals of the villains for the most part of the story initiate hair tugging moments as viewers won’t be able to rest the anxiety of how the sociopath might attack again even in the dying minutes of the finale.

The climactic capturing of the anti-hero hits a short lived momentous spot as the writer of Tunnel seems keen to give the viewers every detail he knows in dealing with a psychotic. The lecture frames sometimes overshadow the emotions and presence of the good guys in the series, owing to the plot’s fixation on the villain.

The closing episode maintains the sentimental note, which suited the intense filled story. It is nice how the synergy of the crime unit team is focused like they are playing real detectives with their immersion to their respective roles.

Tunnel is introspective in showing the motivations of how psychopaths and sociopaths are growing in the society. It gives a lingering lesson on how evil actions can never be justified.

Technically, the time-wrinkling magic is vaguely explained, and is given to the audience under a condition that they will not question details about it. So I choose to not dwell on it. After all, Tunnel seeks to impart lessons about the evil and goodness in human nature, and the importance of a loving family. 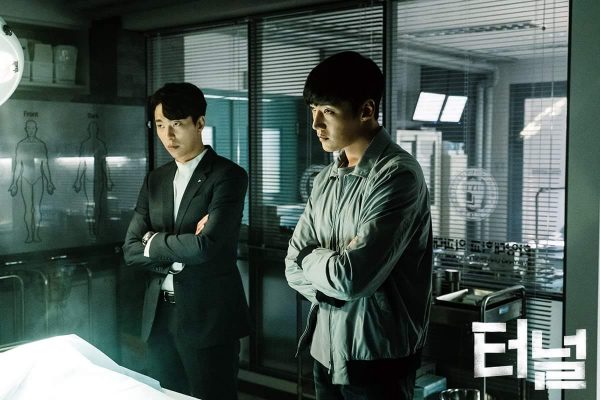 The murky tone and cop and crime standpoint of Tunnel targets a specific audience. It can easily win you over, given the uncluttered storytelling along with the nail-biting moments. It is also not as gritty and bloody as the contemporary dramas of police procedural genre.

If you are up for a brain teaser while pretending to be a television spectator detective, Tunnel will suit your taste. From the start to the end, the enigmatic package of the story did not rest even for a second.