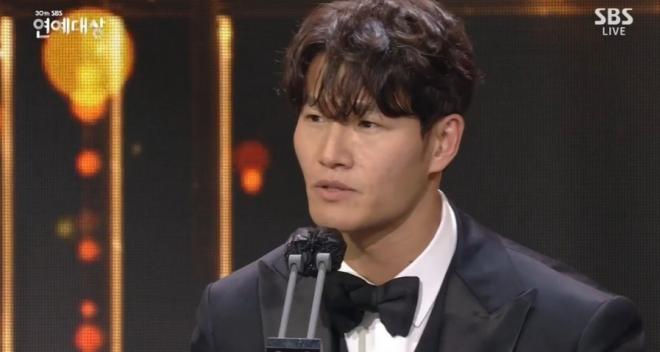 SBS has named the variety stars who shone the brightest this year at the recent 2020 SBS Entertainment Awards.

This year, the grand prize (Daesang) went to Kim Jong Kook. He is a fixed cast member on the well-loved programs namely, Running Man and My Ugly Duckling. Although he won multiple Daesangs as a singer, this is his very first time to bag the recognition at an Entertainment Awards.

Delighted to accept the award, Jong Kook shared that he couldn’t prepare a speech but admitted that he would have been disappointed if he hadn’t won.

“I originally appeared on variety shows to promote my career as a singer. At first, I hated it. If Yoo Jae Suk told me to do something, I would silently say, ‘Please don’t.’ But now I think variety has become my life,” he said.

Thankful for the decade-long friendship with his cast members, Jong Kook said, “The Running Man members have worked hard. I dedicate this award to all of them.”

He also expressed his gratitude to the My Ugly Ducking cast. “I’m really amazed that many people were able to know our parents through the show. The members requested me to mention Tak Jae Hoon if I receive this award. I’ll say that he won the Daesang once and fell into a slump, but I’m not going to do the same and keep working hard instead,” he added.