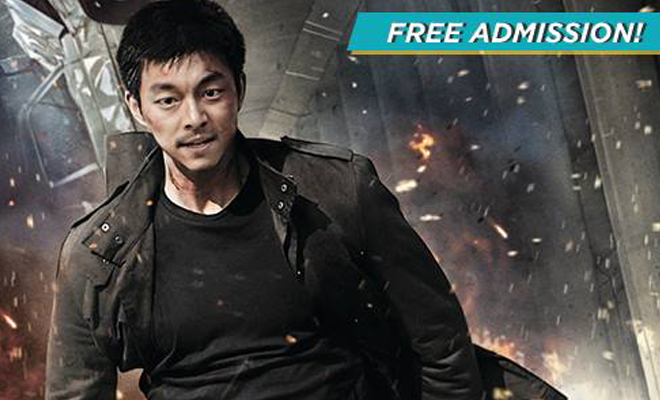 If you missed the Train To Busan in the Philippines, here’s another chance for you to see him on the big screen.

The ‘2016 Korean Film Festival’, organized by the Korean Cultural Center and Embassy of the Republic of Korea in the Philippines, is one of the largest celebrations of Korean films in the country. This year’s featured films are centered within the theme of “Strong Hearts” from 2012 to 2015.

One of the five films in the festival is The Suspect, starring Gong Yoo, who gained popularity in the Philippines from Korean drama Coffee Prince, to the blockbuster Korean zombie-apocalypse thriller movie Train To Busan.

Read More: Next Station: The ‘Train to Busan’ Is Making Its Way to The Philippines

In this movie, Gong Yoo plays the role of an ex-North Korean operative in his first venture into an action packed-role.

Gong Yoo’s role named Ji Dong-chul is a former top North Korean operative, who became a defector after being betrayed by his own country.

His life is thrown into chaos after he’s framed for the murder of his boss, and is forced to go on the run, chased by General Min Se Hoon (Park Hee Soon).

Aided by a feisty documentary maker (Yoo Da In), Dong-chul tries to get to the bottom of the assassination, linked to a mysterious formula, which may or may not be for a new and deadly chemical weapon.

With Se Hoon and the director of national intelligence (Jo Sung Ha) on his trail, things get personal for Dong-chul when it becomes clear that the conspiracy also involves the killing of his wife and child years back. 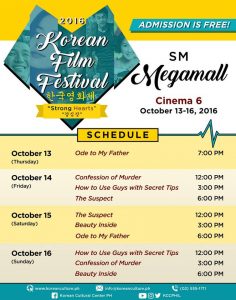 Schedule of Films for MANILA 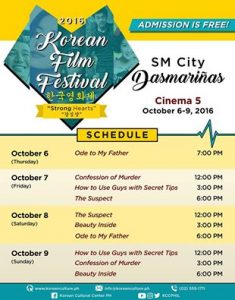 Schedule of Films for CAVITE

The other films featured in this year’s festival are The Beauty Inside, Ode to my Father, How to Use a Guy with Secret Tips, and Confession of Murder.

The 2016 Korean Film Festival in the Philippines is made possible in cooperation with the Film Development Council of the Philippines (FDCP), the Film Cultural Exchange Program, Korea Copyright Commission, Korea Tourism Organization, SM Cinema and SM Lifestyle Entertainment, Inc.

hellokpop is proud to be an official media partner for the 2016 Korean Film Festival in the Philippines.