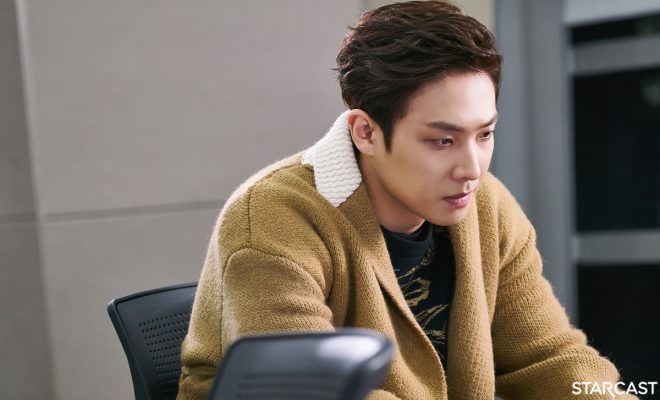 Lee Joon is up on a weekend drama!

The former MBLAQ member stars in KBS2TV’s weekend drama ‘My Father Is Strange’.

In an interview with Starcast, Lee Joon opened up on acting with his senior actors and actresses.

The actor acts in the drama with Kim Yeong Cheol, Kim Hae Sook, Ryu Soo Young, Jung So Min, and Lee Yu Ri, among others.

“They treated me so well,” the actor spoke of his seniors. “There would be more scenes that I’ll show up with them, and I’ll do my best not to be troublesome,” he added.

“So Min is a cool and thoughtful woman,” he said.

The actor was impressed at the actress for not hesitating to lose her face to deliver her role. “I think she’s so awesome as an actress,” he added.

On Ahn Joong Hee and doing a weekend drama

Lee Joon also talked about his character and his preparations in doing a 50-episode drama. He plays the character of Ahn Joong Hee in the drama.

Ahn Joong Hee was described as a former-idol-star-turned-top-star, who is awful at acting. “Whenever I practice to act awful, I come to think that I am really bad at acting,” he said.

He also described his character as someone, who pretends to be strong on the outside but has his warmth hidden inside.

“Though Ahn Joong Hee pretends to be strong, he has a warm part,” he explained. He then added, “He is also dumb sometimes. I think it’s a character that will attract the viewers to feel sympathy for him.”

Lee Joon will also show new sides of him in his new family, weekend drama. (Photo from iHQ)

Expected to run for 50 episodes, Lee Joon shared that he is looking after his health by exercising a lot and taking enough rest before the shooting starts. He also asked viewers to anticipate his new drama. “I’m happy to come back with a family drama. I think I’d be able to show you my new looks,” he said.

‘My Father is Strange’ is a family drama, which centers on Ahn Joong Hee. He comes into the family of Byun Han Soo and his four children, and ends up living with them.

The drama airs every Saturdays and Sundays. The weekend drama began its broadcast last March 4, and occupied the time slot of its predecessor ‘The Gentlemen of Wolgyesu Tailor Shop’.