MBC and BBC lead the production for a new COVID19 documentary highlighting South Korea’s success at fighting the virus!

The BBC recently confirmed its partnership with MBC to produce a feature documentary for audiences on the global pandemic. Titled South Korea: How To Fight Coronavirus, it will discuss the country’s leading position in handling the virus.

It will first premiere through BBC’s OUR WORLD program, which airs documentaries of current affairs on global issues. In particular, BBC also expressed plans to re-run the broadcast several times, including on evenings and weekends. 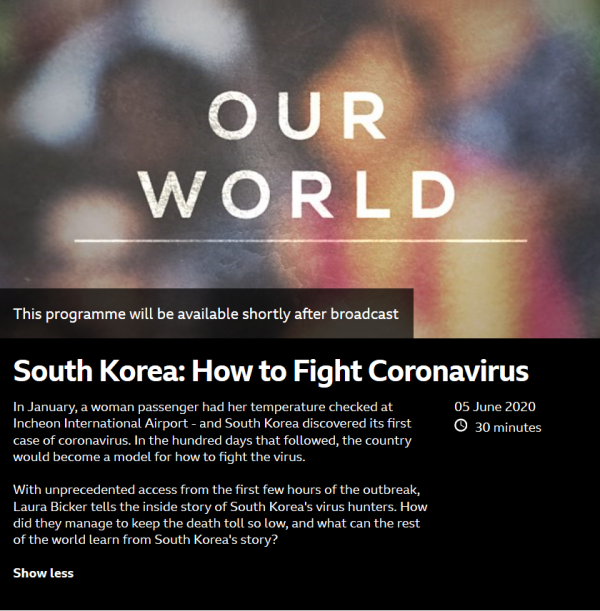 The documentary traces the pandemic’s journey in the country starting in January 2020. The broadcast shows how a Chinese woman in Incheon International Airport became South Korea’s first confirmed patient. Then it follows the behind-the-scenes story of the country’s later efforts to treat and locate the virus.

The world continues its struggle to defeat COVID-19. Britain has the most amount of deaths in Europe, sparking BBC’s interest in South Korea. The BBC stated its desire to focus on what other countries should learn from South Korea’s successful battle with the virus.

Producer Kang Hyo Im from MBC explained, “It was the first time in Korea to create a co-production documentary through the commissioning of the BBC, and I was particularly nervous about the documentary meeting viewers all over the world.” He added. “We were deeply interested in how we prepared, and how citizens cooperated. Co-production with the BBC to find the answer in Korea in the war against the corona virus was a valuable work.”

Viewers can watch the South Korea: How To Fight Coronavirus through BBC’s OUR WORLD program. It will first premiere on June 5 at 12:30pm GMT (local time). In Korea, it will air June 6 at 8:30am KST. Audiences can also catch the documentary in its various re-runs.

Hellokpop, as an independent Korean entertainment news website (without influence from any agency or corporation), we need your support! If you have enjoyed our work, consider to support us with a one-time or recurring donation from as low as US$5 to keep our site going! Donate securely below via Stripe, Paypal, Apple Pay or Google Wallet.
FacebookTwitter
SubscribeGoogleWhatsappPinterestDiggRedditStumbleuponVkWeiboPocketTumblrMailMeneameOdnoklassniki
Related ItemsMBCMBC BBCMBC documentarySouth Korea COVID19
← Previous Story 56th Baeksang Arts Awards: Complete List Of Winners, “When The Camellia Blooms” & “Parasite” Director Bong Joon Ho Receive Daesang
Next Story → INFINITE’s Sung Gyu And L To Greet Fans With Mukbang On V Live For 10th Anniversary Celebration