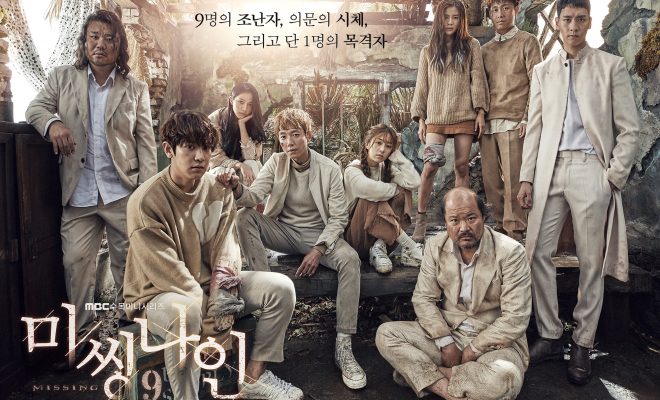 MBC’s castaway series ‘Missing Nine’ concluded its run with low viewership rating, according to data by Nielsen Korea. The Wednesday-Thursday MBC drama aired its 16th and final episode last March 9, with a viewership rating of 4.2 percent.

The drama, which starred Jung Kyung Ho, Baek Jin Hee, Choi Tae Joon and EXO‘s Chanyeol, aired its first episode last January 18 with an average viewership rating of 6 percent. However, the MBC drama failed to improve its ratings, and continued to suffer declining numbers during its run. Throughout its 16-episode run, ‘Missing Nine’ suffered a lackluster run, with viewership rating averaging within the 4-percent line.

KBS2TV’s ‘Good Manager’, on the one hand, remained on the top of its game, leading the Wednesday-Thursday drama race. The KBS2TV drama starring Namgoong Min, Nam Sang Mi, Jung Hye Sung, and 2PM‘s Jun Ho recorded a 17.1 percent viewership for its 14th episode. This is a 0.3 percent higher compared to its 13th episode aired on Wednesday.

Up by 0.2 percent, SBS’s ‘Saimdang, Light Diary’ garnered a rating of 10.5 percent. The SBS drama marked Lee Young Ae‘s return to television after 14 years of hiatus since the 2003 hit ‘Jewel in the Palace’. ‘Saimdang, Light Diary’ also stars Song Seung Heon. The drama is the actor’s comeback project after four years following ‘When A Man Loves’.

However, despite much talks on the grand return of the actress, viewers’ response to ‘Saimdang, Light Diary’ remains underwhelming because of the said slow and discombobulated plot of the drama. SBS has responded to criticisms by re-editing the entirety of the drama.