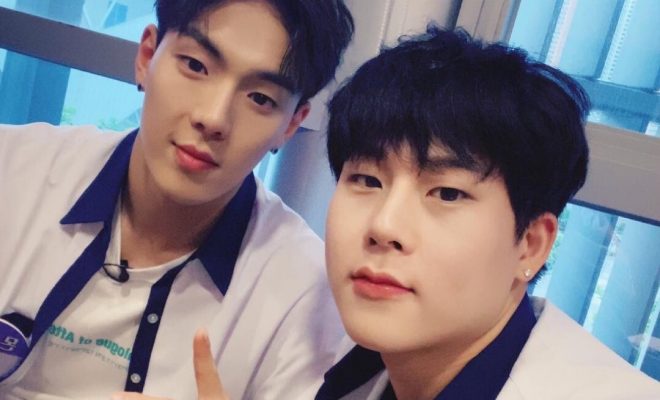 MONSTA X’s Shownu and Jooheon prove that they are indeed the dashing duo with their appearance on jTBC’s Knowing Bros!

MONSTA X’s Shownu and Jooheon made their appearance alongside artists Sunmi and Zico on a fun-filled episode of jTBC’S Knowing Bros. Both MONSTA X members showcase their energetic demeanor in an entertaining way.

They fill up the atmosphere with a lively vibe that is endearing to watch. The transfer students create quite an impact from the get go as they made an unforgettable entrance alongside Sunmi and Zico. Shownu is all smiles as he sweetly introduces himself while Jooheon captivates viewers and even the cast of Knowing Bros with his iconic baksu (clap)!

As the fabulous foursome take a seat, Jooheon attacks viewers’ hearts with his lovable aegyo. Not only that, the ever fierce rapper show off his soft side with his Top 2 aegyo styles. This is surely one moment fans need to prepare for because it is just too cute to handle.

The episode is definitely one that would have Monbebes smiling ear to ear from the start to the end. Jooheon’s Michael Jackson moments are certainly ones that shouldn’t be missed as well! The singer rapper had viewers in splits especially when he channeled his inner Michael Jackson.

The adorable impersonation of the late singer alongside Knowing Bros’ Min Kyung-hoon is certainly one for the books. He also adds the MJ swag in an impromptu collaboration with Zico as he sang his hit song, “Artist’.

Additionally, Shownu and Jooheon leave everyone speechless. Both artists along with Zico, flawlessly execute The King Of Pop’s moonwalk with panache. Whats more? Heechul’s fellow Super Junior member Shindong too, (hilariously) tries his hand at the same as well.

Moreover, a rap battle of sorts between Jooheon, Zico and Knowing Bros’ Lee Soo Geun spurs such a treat to watch. That fans hoping for a future collaboration between the two multi-talented rappers might be incited. The two surprise and impress with their fast paced rap skills.

Meanwhile, Shownu mesmerizes fans with his calm and charismatic look. He truly stuns when he adorably relayed his experiences as a swimmer. Also, he goes for a guessing game with the cast, Jooheon, Zico and Sunmi. They had to guess what he had in order to keep his stamina up during swimming.

Towards the end of the game, the MONSTA X leader reveals in a delightful manner that to replenish his stamina, he enjoys having eel made by his mother. He amusingly adds that he ate too much eel, so much so, that his neck became as oily as it.

The duo’s camaraderie is evident and honestly, another charming moments to watch in the show. Shownu and Jooheon play Knowing Bros’ iconic “Scream In Silence” game. While Jooheon is as engaging as ever, Shownu steals the spotlight in this segment with his heartwarming mannerism especially when he gets excited for getting the answer right.

One of the highlights of the episode surely had to be the spectacular performance by Shownu and Jooheon on the track, “SICKO MODE (Skrillex Remix),” by artists Travis Scott and Skrillex. Though the performance is short, it is enough to steal fans’ breaths away. With the performance, they definitely show off their MONSTA energy leaving viewers speechless and spellbound.

Overall, this Knowing Bros’ episode is unquestionably one happy episode to remember!