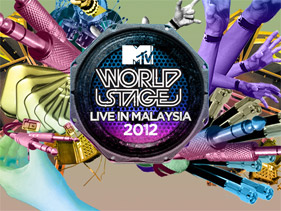 As a countdown commenced to signify that the show was about to start, the decibel levels skyrocketed as worldwide superstar and #1 recording artist Justin Bieber opened the show by emerging from center stage and kicking off the night with his smash hit, “Baby.”  Being Bieber’s only Southeast Asian stop, the screams could be heard from Subang to Kuala Lumpur as he enthralled fans with performances of “All Around the World” and “As Long As You Love Me,” followed by acoustic performances of “Die in Your Arms,” “Be Alright” and “One Time.” The tempo picked back up with “Never Say Never” and the set closed with “Boyfriend,” the first hit single off of Believe, Bieber’s newly released full-length album that catapulted to #1 in 30 countries across the world in its first week of release including Malaysia, Singapore and the Philippines.

Park Gyu Ri, Han Seung Yeon, Goo Ha Ra, Nicole Jung and Kang Ji Young – better known as Korea’s mega girl-group, Kara — were next to take the stage, marking their first-ever live Malaysian appearance.  Their set kicked off with “Step” accompanied by ten dancers and set a high-energy tone that carried straight into performances of “Jumping,” “Lupin,” and “Honey,” and “Let It Go”.   Kara finished up their set with their history and dance craze making hit “Mister,” the single that put Kara in the record books as the first non-Japanese female group to break the Top 10 in Japan’s Oricon charts in over 29 years.

Malaysia’s own Mizz Nina was the next for MTV World Stage Live in Malaysia, opening her set with “Just Do It” and then going into “Takeover” and “Hit Me Up.”  After a quick wardrobe change, Mizz Nina commanded center stage with performances of “Rentak Yang Sama,” “With You” and “Summer Burning,” then finishing her debut on the World Stage with a call to music fans all over the world to sit up and take notice of Malaysia’s homegrown talent with “What You Waiting For?”

The finale of the night belonged to Jay Park, who kicked off his set with “AOM and 1llionaire.”  Showing fans why the U.S. born and bred Korean-American singer, songwriter and dancer consistently tops the charts, he kept the crowd captivated with “Abandoned” and a Korean version of “Know Your Name.”  Slowing things down, he then performed the ballad “Carefree,” followed by medleys of “Nothing” and “Girlfriend,” as well as “I Got Your Back” and “Star.”  Park’s female fans swooned to his rendition of “Turn Off Your Phone” and “Do What We Do,” before picking the tempo up for a show-stopping dance number, and then bringing MTV World Stage Live in Malaysia to a close with a spectacular rendition of “Body2Body.”

Now, you can catch these live actions again at the comfort on your favorite TV channels. Below are the programming details, applicable only for viewers from Singapore, Malaysia, Hong Kong, Philippines and Indonesia.

Lastly, watch this special episode of The MTV Show, which will take you on an exclusive journey into World Stage Live in Malaysia 2012. Watch the scenes, sights and sounds covered from the spectacular concert. Look out for some never seen before behind the scenes footage too.

We need your support! If you have enjoyed our work, consider to support us with a one-time or recurring donation from as low as US$5 to keep our site going! Donate securely below via Stripe, Paypal, Apple Pay or Google Wallet.
FacebookTwitter
SubscribeGoogleWhatsappPinterestDiggRedditStumbleuponVkWeiboPocketTumblrMailMeneameOdnoklassniki
Related ItemsJay ParkKARAMTVMTV World Stage Live in Malaysia 2012
← Previous Story Gong Yoo’s ‘Big’ and ‘Silenced’ to air in Japan
Next Story → ‘To the Beautiful You’ releases first teaser video