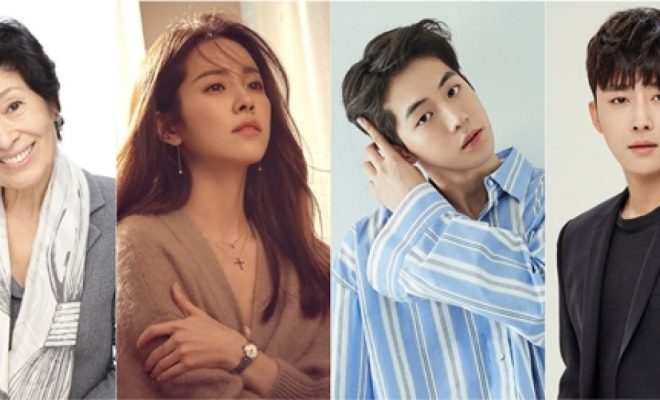 A new dazzling K-Drama is about to make its way to your TV screens – and it will star none other than Nam Joo Hyuk, Han Ji Min, Kim Hye Ja, and Son Ho Jun!

jTBC has confirmed on November 7 that it is gearing up for a new drama, which already boasts of a star-studded line-up with Nam Joo Hyuk, Han Ji Min, Kim Hye Ja, and Son Ho Jun.

The new drama, which has the working title of Dazzling, is set to air in 2019, and has already begun filming in October. It is a fantasy drama that revolves around the lives of two people whose difficulties are determined by one factor: time.

Kim Hye Ja and Han Ji Min will share the lead character named Kim Hye Ja (yes, we know – the coincidence!), a woman who has been given the ability to time travel. Finding herself utterly unable to just watch injustice take place without being able to do anything about it, she works on her way to being a news anchor. However, despite her abilities and positive mindset, she ends up being in complicated situations no matter what she does.

Nam Joo Hyuk will take on the role of aspiring reporter Lee Joon Ha, who has been so built on chasing his dream that he ends up throwing away opportunities to enjoy the best days of his life. His mentality of always looking ahead makes him disregard the things in front of him, and together with his lack of appreciation for time, his life ends up seeming meaningless.

Son Ho Jun will be playing the older brother to Joo Hyuk’s character named Kim Young Soo. Being the complete opposite of his brother Joon Ha, he doesn’t find himself bogged down by time, and viewers can expect his character to bring in humor to the show with his mischief.

Are you looking forward to Nam Joo Hyuk and Han Ji Min’s new drama? Let us know by leaving a comment below, giving us a holler on Facebook, or tweeting us at @hellokpop!