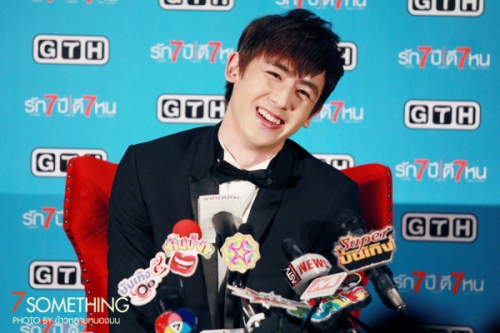 2PM‘s Nichkhun has made his return to Korea after embarking on a short trip to Thailand on the 19th of July for the Seven Something press conference and movie premiere. Over 200 media representatives were reported to have attended the conference and over 2000 fans and 300 media officials were present at the premiere location to show their moral support for the motion picture and the cast.

Anticipating the outcome of his first film, Nichkhun revealed:

“I’m happy to attend my first debut production’s press conference as a movie actor and am experiencing a new feeling. As the movie was a happy one to shoot I believe the movie will remain in people’s hearts and I want to express my gratitude to the patient and helpful staff.”

In Seven Something, changes experienced in life are separated by increments of seven years. Nichkhun plays the role of one of the main characters who is in love in his third period of life which is between the age of 21 to 28. Seven Something will be released in Thailand on the 26th of July.