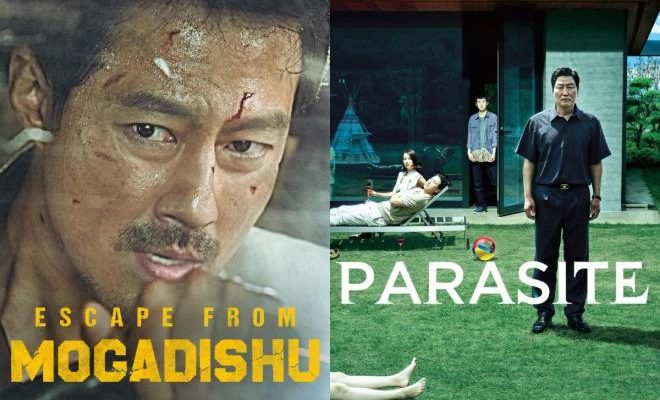 “Parasite” & “Escape From Mogadishu” To Stream On Netflix This Month

2020 Oscar winner, Parasite, and 2022 Baeksang Awards Best Film Escape From Mogadishu will be streaming on Netflix this May.

These two thriller films were loved by many viewers because of their incredible plots that make you stay still on your sits and can make your heart beat faster.

Directed by Bong Joo Ho, Parasite tells the story between the elites and the marginalized. Kim Gi-Woo (Choi Woo Shik) is a young man who doesn’t have a job.

His family is poor since they are all living in a semi-basement and do several jobs to survive day by day. One day, Gi-Woo became a private tutor of the daughter of a well of family.

Gi-Taek (Gi-Woo’s father) also became the driver of the family. As they continue to work, they slowly take advantage of the family to benefit themselves. The film shows the struggles of the marginalized sector and their desperate ways to live each day.

Directed by Ryu Seung Wan, Escape From Mogadishu tells the story of the civilians who are caught in the Somalia Civil War in 1991. Kim Yeon Sook, Jo In Sung, Heo Joon Ho, and Koo Kyo Hwan teamed up to escape and survive.

The 58th Baeksang Arts Awards best film may be a bit sensitive to the audience, however, it retells the struggle of all the people and their desperate ways just to escape. In history, the war lasted for 30 years and affects the whole population of Somalia.

Escape From Mogadishu premieres on Netflix on May 27.

If you are interested in history and the realities of society, you might want to watch these films. These two movies would be available on Netflix this May.

Netflix is one of the world’s leading entertainment services with 222 million paid memberships in over 190 countries enjoying TV series, documentaries, feature films, and mobile games across a wide variety of genres and languages.