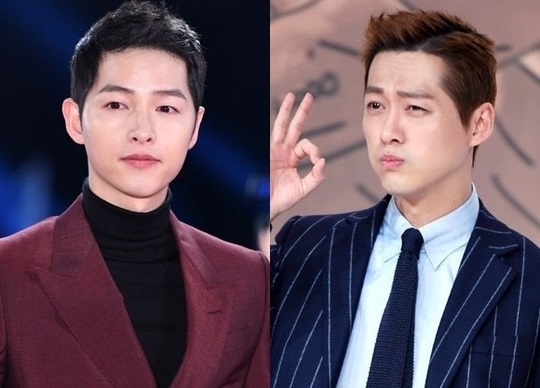 By Adrian | May 11, 2017
376
SHARES
FacebookTwitter
SubscribeGoogleWhatsappPinterestDiggRedditStumbleuponVkWeiboPocketTumblrMailMeneameOdnoklassniki

What type of ‘man to man’ chemistry can Park Hae Jin produce with Song Joong Ki and Namgoong Min in a short time?

Song Joong Ki is reportedly to appear in the coming ninth episode of ‘Man to Man’ with the character of a bank employee. He will have a short interaction with Park Hae Jin and Park Sung Woong’s characters in the drama. His cameo opportunity came about because the writer of ‘Man to Man’ is Kim Won Suk, who was actually the co-writer with writer Kim Eun Sook for his hit drama ‘Descendants of the Sun’.

For Namgoong Min, as he has worked with PD Lee Chung Min for the drama ‘Remember’, he will also be taking on the cameo role for the director’s current drama ‘Man to Man’, although little details have been revealed.

Hellokpop, as an independent Korean entertainment news website (without influence from any agency or corporation), we need your support! If you have enjoyed our work, consider to support us with a one-time or recurring donation from as low as US$5 to keep our site going! Donate securely below via Stripe, Paypal, Apple Pay or Google Wallet.
376
SHARES
FacebookTwitter
SubscribeGoogleWhatsappPinterestDiggRedditStumbleuponVkWeiboPocketTumblrMailMeneameOdnoklassniki
Related ItemsNamgoong minPark Hae JinSong Joong Ki
← Previous Story Why You Should Start Watching K-Dramas, If You Have Not
Next Story → 5 Reasons Why Dara Is ‘One Step’ Ahead With Her First Lead Role Korean Film