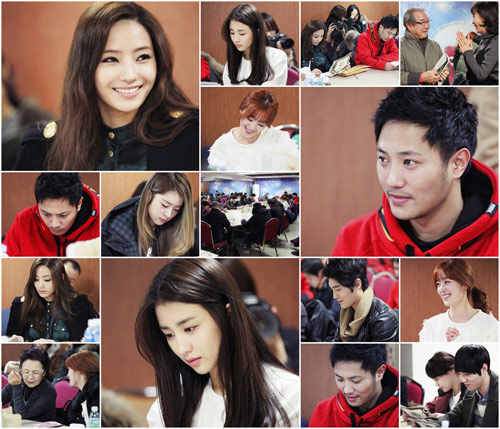 New upcoming KBS Monday-Tuesday drama series Advertisement Genius Lee Tae Baek (광고천재 이태백) has held its script reading session and the related photos were revealed. On January 9th at KBS, the cast and staff had their first script reading session with the cast Jin Gu, Park Hasun, Han Chae-young, Han Sunhwa and many other actors. All actors were present with no one was missing for their first meeting.

On this day, KBS drama commissioner Lee Kang Hyun attended the meeting and encouraged the staff, “As this is the first drama to start off the year 2013 for us, I believe that the staff and actors will do their best to take this drama forward. I hope you will enjoy the filming sessions and to have a fun time with each other to create the best results of the drama. I know it will be hard but I hope you will do your best until the end.”

The drama will start on February 4th after School 2013.