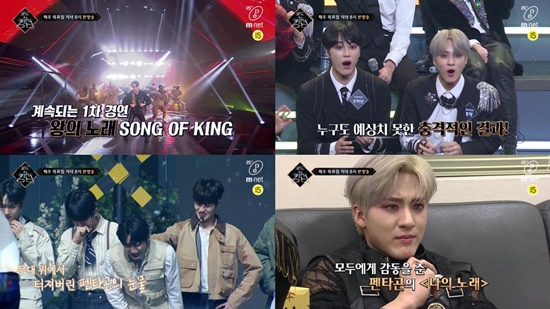 The latest episode of Road to Kingdom threw us into an emotional rollercoaster with its packed showcases of talents and heart-wrenching revelations.

Finally completing the first competition round of Road to Kingdom, its two contenders currently standing out as the creme of the crop gave unforgettable stages in an effort to defend their spots.

After the five other groups began performing their “Song of King” picks on the previous episode, PENTAGON and The Boyz made sure to wrap up the round with a splendid finish that went beyond everyone’s expectations.

A performance that surpasses the levels of “very good” is what PENTAGON delivered with their stage version of the hit Block B song. Inspired by the film “Mad Max”, the boys charged on with a performance filled with intensity—from its choreography, vocal and rap showcases, up to the overall aura and stage presence radiated by each member.

Prior to the performance, the episode also showed how Hui poured his heart out into arranging their version of “Very Good” on his own. He also took charge of guiding the rest of the group while recording the song and making sure that everything is perfect.

Lastly, The Boyz stood guard for their number one spot by storming the stage with a very surprising pick. Performing Taemin’s “Danger”, the group garnered amazement from viewers and fellow contestants with how they managed to make a song from a soloist fit a group with 11 members so well.

Road to Kingdom Round Rankings

All groups delivered impeccable performances for this round—that’s for sure. This is why it was very difficult, even for us, to imagine what the ranking would be like. Nevertheless, everyone did well, and we’ll be staying on the edge of our seats for the next episodes to see whether the Road to Kingdom rankings will be shaken up.

The 1st round rankings are as follows:

As teased on the previous episode, PENTAGON showed a stage that made everyone shed tears. Chosen by The Boyz to begin the new round called “My Song” where they perform their own hits, the group displayed their versatility via a fun-filled stage of “Shine” and “Spring Snow”.

However, the travel-themed, upbeat, and cheerful performance had a shift of atmosphere as the group arrived to its midpoint. Putting the spotlight on a surprised Jinho, the other members departed from the stage as they paid him tribute with a special video that tugged on everyone’s heartstrings. This is where other contestants found out that the PENTAGON member is leaving the show as he is already set to enlist in the military.

Following this shocking revelation, the group still picked up their performance and made everyone smile despite their tears as they finished the stage. The powerful showcases of the other contestants were then hinted afterwards with preview clips, making fans look forward to the next episode even more.

Photos and videos from Mnet