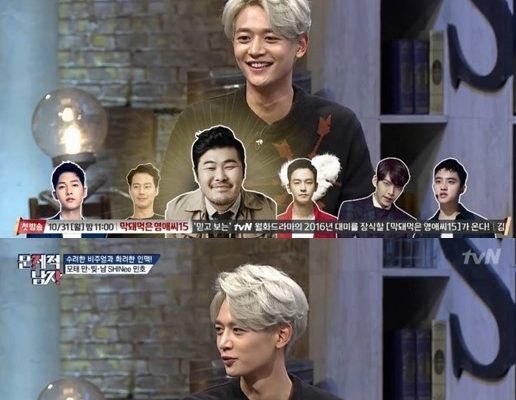 SHINee’s Minho: “I Think Song Joong Ki Has To Be The Most Eloquent”

Do you agree with Minho?

SHINee’s Minho recently made his appearance on the October 16 episode of tvN’s Problematic Men.

During the TV show, the heartthrob revealed that he is close with many celebrities, directors, and soccer players, namely Song Joong Ki, Zo In Sung, Kim Ki Bang, Im Joo Hwan, Kim Woo Bin and D.O.

He paid Song great compliments, saying: “He is articulated when he speaks. Even if he′s saying something similar to someone else, he is great at clarifying.”

In contrast, Minho expressed his modesty by revealing: “Honestly, I don′t think I′m eloquent. While watching ′Problematic Men′ a lot of things I didn′t know about that would come out.”

The SHINee member continued by joking: “However, I think I solved more problems than Jun Hyun Moo.”