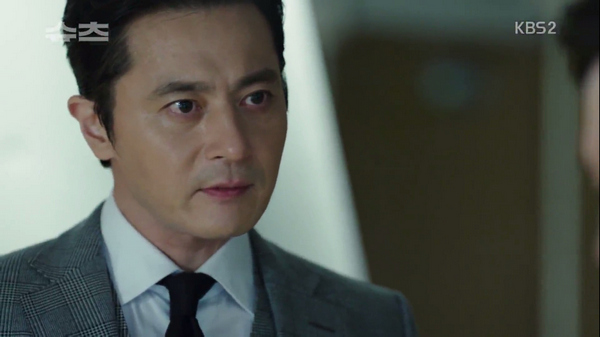 By Yann | May 16, 2018
FacebookTwitter
SubscribeGoogleWhatsappPinterestDiggRedditStumbleuponVkWeiboPocketTumblrMailMeneameOdnoklassniki

Suits brings in a mad Kang Seok and a confused Yeon Woo as it continues to top in viewership ratings into its third week!

After Yeon Woo had proven to take off to a good start at Kang & Ham, more challenges await him as he delves into the world of lawsuits and settlements even deeper. On the legal drama’s third week, he sees not just his work life getting complicated – but also his romantic relationships.

Rundown of highlights from episodes 5 and 6: 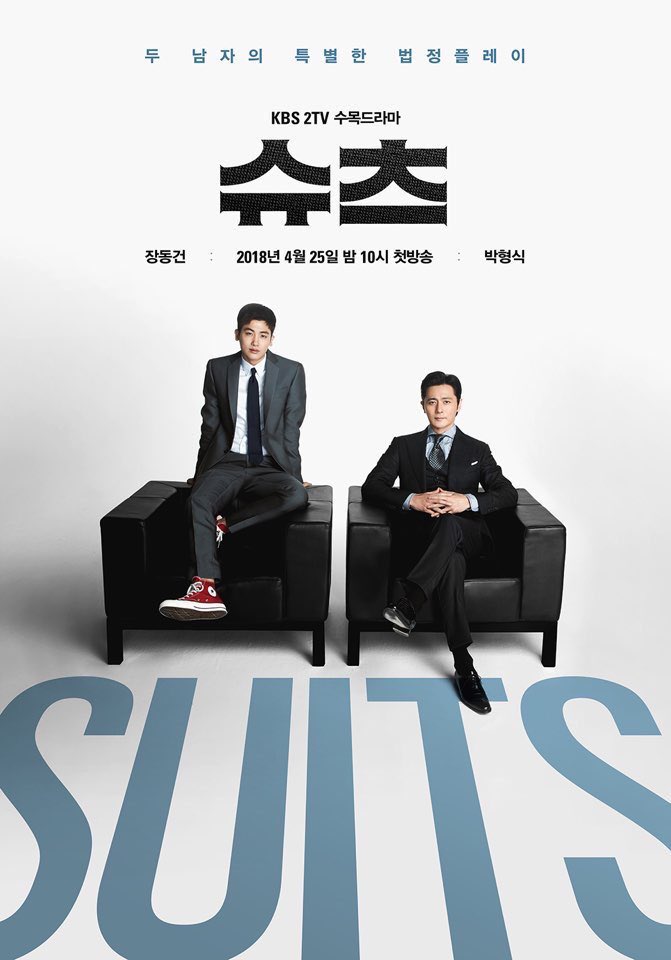 Kang Seok finds Ms. Kang hugging someone at her office – who turns out to be CEO Kim from Yumi Pharmaceuticals. Ms. Kang reveals that not only is he their next client, but also her ex-husband. CEO Kim has commissioned a lawsuit regarding the medicine his company has produced for patients with Lou Gehrig’s disease – which seems to cause liver problems as a side effect. She asks Kang Seok to take on the case, but the top-notch lawyer, who is aware that 5 patients had already died because of the medicine, seems reluctant to do so and initially, turns it down.

However, an arrogant lawyer suddenly appears at Kang Seok’s office, and introduces himself as David Kim. He boasts that he had studied at Harvard, and will be handling the opposing side for the Yumi Pharmaceuticals’ case. He challenges Kang Seok to take the case, and go against him because he wants to go against Kang and Ham’s best lawyer. David gives Kang Seok his business card, which the latter rips in his face before turning him away.

However, Kang Seok, who was displeased with David’s conceit, informs Ms. Kang that he will take Yumi Pharmaceuticals’ case, and bring the arrogant lawyer down. 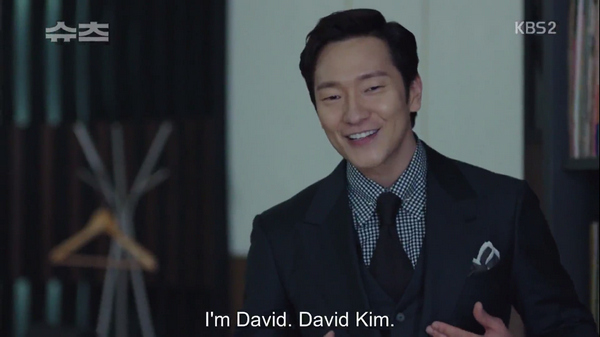 Kang&Ham holds its mock trials for rookie lawyers and probationary associates, which serves as a chance to make an impression, both on the firm’s partners and Ms. Kang. Geun Sik, who handles the mock trials, assigns Yeon Woo to go against the rookie lawyer Attorney Seo. Attorney Seo initially complains about going against a trainee like Yeon Woo, mentioning that he had won the national mock trial four times starting from elementary to law school.

Yeon Woo asks Kang Seok for advice on the mock trials, seeing as he is Kang & Ham’s top lawyer, but the latter expresses disinterest in helping his associate. However, he does tell Yeon Woo to play by his own rules.

The probationary associate overhears Attorney Seo saying he plans to humiliate him on the mock trials. Yeon Woo talks to him and warns the rookie lawyer to not underestimate him, because he might have a few tricks up his sleeve after all. The associate follows Kang Seok’s advice, and convinces Attorney Seo to come to an agreement to settle the case. Attorney Seo agrees to Yeon Woo’s suggestion, and shakes hands with him. 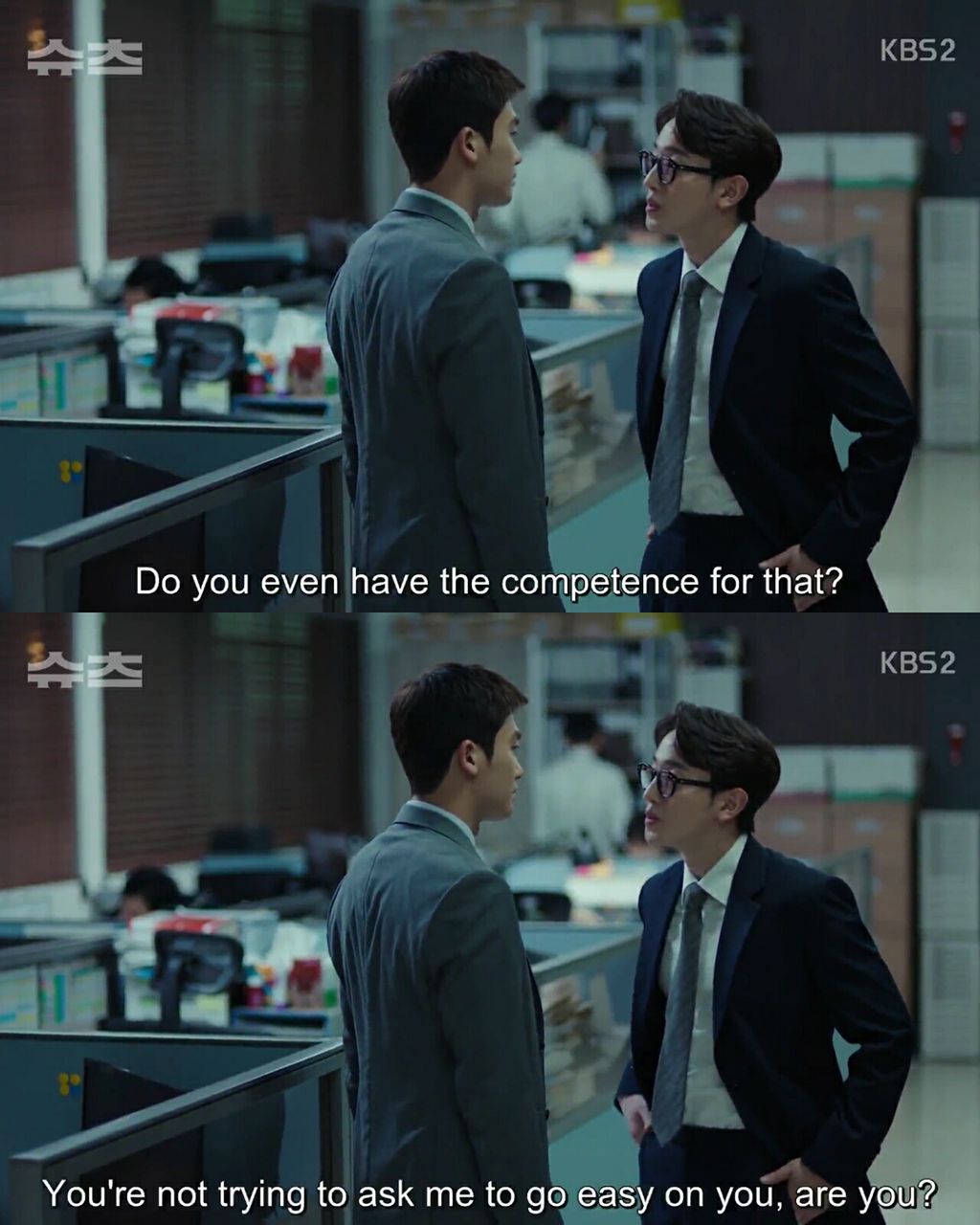 Se Hee goes to the firm office, and meets Ji Na in the lobby. The former remembers seeing the paralegal with Yeon Woo, and approaches her. Se Hee asks where Yeon Woo is, and reveals that she’s his friend, which shakes Ji Na a little. Shortly after Ji Na leaves, Yeon Woo arrives and meets Se Hee, who fixes his tie while they talk. Ji Na is seen witnessing this entire encounter from afar, and proceeds to walk away.

Afterward, Yeon Woo goes to Ji Na’s office to ask her to play as his client for the mock trial. However, the paralegal coldly answers that Attorney Seo had already asked her, and she agreed to him. Yeon Woo walks out of her office disappointed, while Ji Na goes to Attorney Seo, and tells him she’d be his client despite turning him down the day before.

David gathers Kang Seok’s clients, and plays dirty by informing them that his side, Noxi Chemicals, is willing to compensate each victim with 10,000 dollars. He tells them to let him know if there are takers, and throws his business cards to the people, who eagerly picked it up. Infuriated, Kang Seok tells David that starting now, he will start pitching knives and spears if he wants to play dirty.

Yeon Woo tells Kang Seok that David was a step ahead of them this time, and Kang Seok admits that his style is similar to that of the arrogant lawyer. The probationary associate suggests that they change their strategy and Kang Seok says he is left with no choice, but to make an approach he usually wouldn’t consider if he wants to win against David.

Kang Seok tells Yeon Woo to look further into the Yumi Pharmaceuticals case, which leaves the associate with insufficient time to prepare for the mock trials.

Despite their earlier agreement to settle, Attorney Seo betrays Yeon Woo, who is caught entirely off-guard and unprepared for the case. Yeon Woo tries to say otherwise, and Ms. Kang asks him if he wrote out the agreement – to which he admits he failed to do. He blanks out during the mock trials out of shock and frustration, but is able to find a way for Ms. Kang to grant him 10 minutes to prepare himself.

Ji Na talks to Yeon Woo in the hallway during the ten-minute break, and Attorney Seo catches them which leads to an argument between the rookie lawyer and the associate. When they return to the mock trials, Yeon Woo tells the court that his side wants to file a counteraction for violation of personal rights. Ms. Kang permits the counteraction, and gives them another day of pleading for the plaintiff and defendant of the case have changed.

Kang Seok hears about this incident and scolds Yeon Woo, telling him that the purpose of the mock trials was to test him. The top-notch lawyer orders to never bring up the mock trials in front of him ever again, and to look into the Yumi Pharmaceuticals case instead.

However, when Yeon Woo leaves, Kang Seok calls up Ms. Hong to talk about the mock trials – obviously displaying concern over his associate. 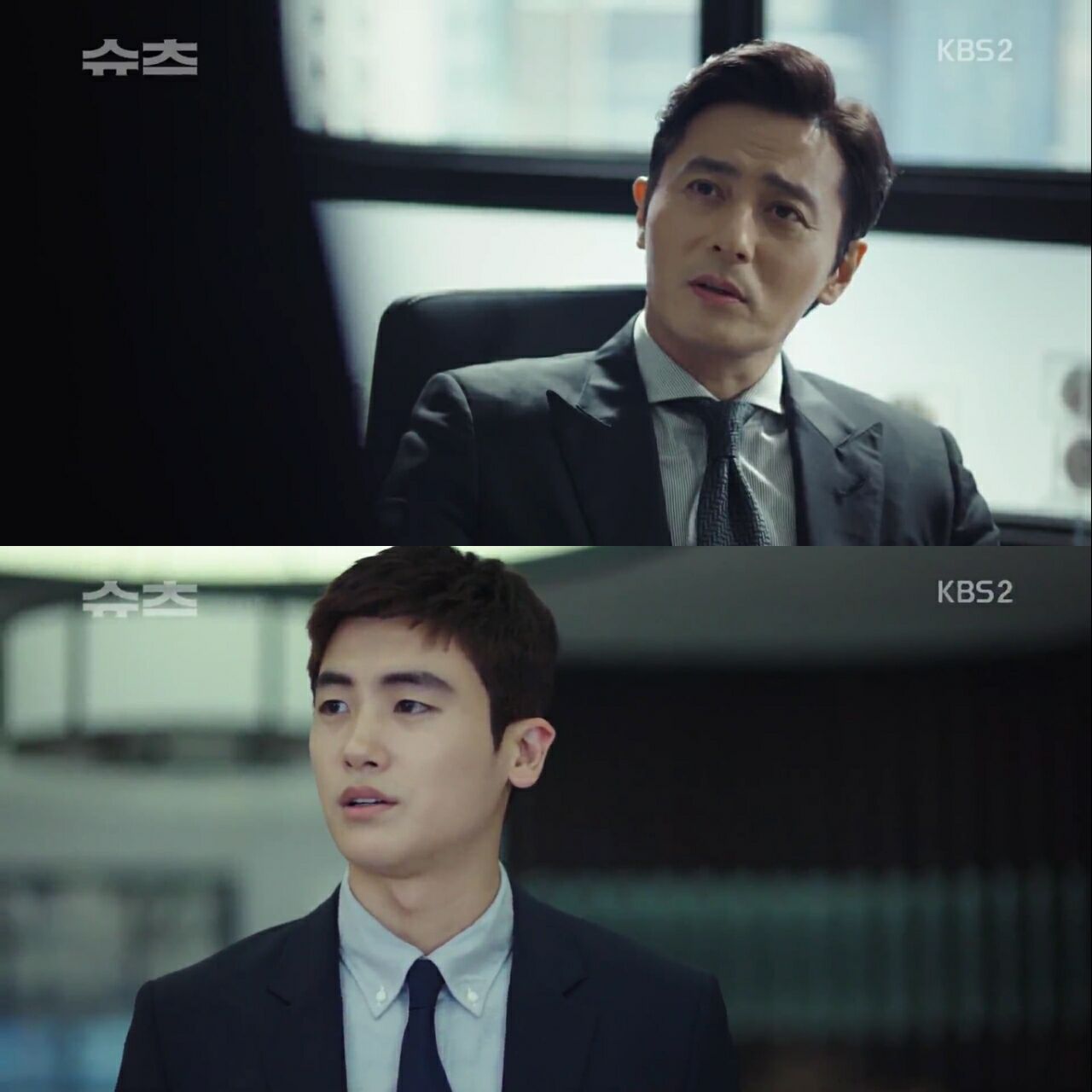 Yeon Woo walks in the middle of Kang Seok’s meeting with Yumi Pharmaceuticals’ Director Jeon – who is also CEO Kim’s girlfriend, by the way – and insists that they show the financial statements. Director Jeon refuses – which makes Yeon Woo and Kang Seok suspicious.

Yeon Woo shows Kang Seok a file he dug up, which shows that Noxi Chemicals had filed cases against five other pharmaceutical companies. Kang Seok brings this to the court, but Noxi counters it by giving a file of Yumi Pharmaceuticals’ financial statement. The statement shows that the company was practically bankrupt before the drug got released, but right after it did, their sales rose up by 50%.

Kang Seok tells Ms. Kang that CEO Kim’s side had been hiding documents from them, and are blatantly lying to him. He expresses his frustration at how he still needs to trust them just because Ms. Kang said so. He reveals that he even looked into Ms. Kang and CEO Kim’s divorce, to which he found out that he had been cheating on her even before they decided to separate. Ms. Kang asks him if he has to take it this far, and tells him that she’ll handle the case from now on.

Kang Seok is shown earlier to be meeting up with his reliable intelligence agent, who hands him a recording file. He reveals this to David as they talk in his office, and says that the recording is of David talking to the factory manager of Noxi Chemicals.

David, who was caught red-handed, tells him that it’s an act of illegal wiretapping. Kang Seok just shrugs and says someone left it on his doorstep, so he doesn’t know if the recording was obtained illegally – nor does he care.

In the end, David decides to sign the settlement agreement. Right after he leaves, Yeon Woo asks Kang Seok if he really would’ve turned the recording in. The high-profile lawyer says he would never do anything dumb in court, and when Yeon Woo plays the recording, he finds out that it was of him in the mock trials.

Kang Seok did have the real recording though, as revealed later on, which only angers him as he listens to it. 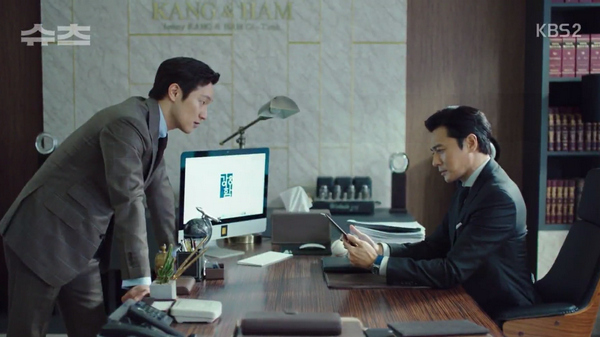 Ms. Kang goes out drinking, and Kang Seok goes to her. She congratulates him for taking care of the case and confesses that the reason why she trusted CEO Kim was that he has Lou Gehrig’s disease too, and is in dire need of the same drug he had produced.

The truth is revealed when Kang Seok and Yeon Woo goes to confront Director Jeon about CEO Kim’s disease. She, later on, admits that towards the end of the clinical test for the drug, a patient did start having liver problems, but she excluded that patient’s records from the results in fear of the drug not getting the approval.

Kang Seok goes on to help Yeon Woo with his mock trial, and tells him to view it as his first fight. He also gets Ms. Hong to help his associate out by playing as his client, while Yeon Woo enlists Se Hee’s help to act as his witness to the case.

Se Hee and Ji Na both meet again at the firm’s pantry, and the latter displays obvious signs of jealousy over the former’s relationship with Yeon Woo. Ji Na talks to Se Hee, and straightforwardly asks her if she is Yeon Woo’s girlfriend. However, Se Hee only says that Yeon Woo asked her to play as his client’s witness.

During the mock trial, the events quickly escalate as Ms. Hong, Ji Na and Se Hee says their “statements”. Ji Na takes the case and the arguments personally, and Yeon Woo realizes why Ji Na has been acting that way towards him. She starts crying during the trial after having a heated argument with the probationary associate, who tries to ask Attorney Seo to settle.

In the end, Ms. Kang declares the defendant – Yeon Woo’s side – as the winner of the trial. However, Yeon Woo doesn’t seem pleased with the turnout of the events, especially as he watches Ji Na walk out of the courtroom in tears. 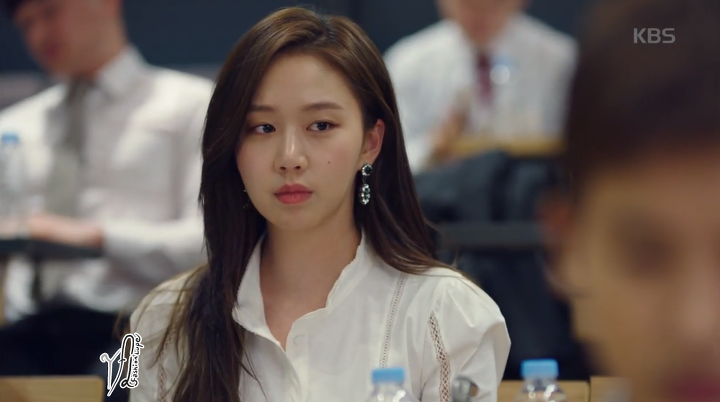 How will Yeon Woo deal with the new complications in his love life? Will his co-workers at the firm keep on giving him a hard time? Find out in the next episodes of Suits!

Suits airs on KBS every Wednesdays and Thursdays.