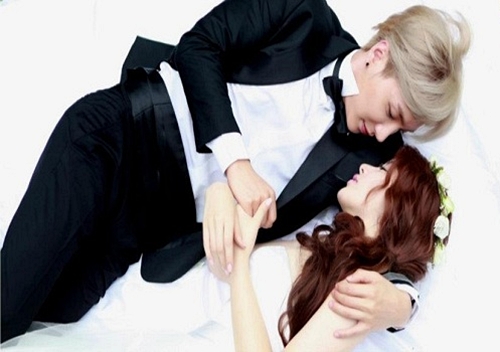 Super Junior member Leeteuk and actress Kang Sora will officially make their last appearance on MBC‘s We Got Married on the 8th of September.

Dubbed as the ‘Dimple Couple’, Leeteuk and Kang Sora will end their virtual marriage as Leeteuk will join the army at the end of the year. Replacing the couple will be MBLAQ‘s Lee Joon and actress Oh Yeon Seo, who have also participated in KBS‘ program My Husband Got A Family.

The new pairings added to the show include Julien Kang with Yoon Se Ah and ZE:A‘s Kwang Hee with Secret‘s Han Seon Hwa.

Hellokpop, as an independent Korean entertainment news website (without influence from any agency or corporation), we need your support! If you have enjoyed our work, consider to support us with a one-time or recurring donation from as low as US$5 to keep our site going! Donate securely below via Stripe, Paypal, Apple Pay or Google Wallet.
38
SHARES
FacebookTwitter
SubscribeGoogleWhatsappPinterestDiggRedditStumbleuponVkWeiboPocketTumblrMailMeneameOdnoklassniki
Related ItemsDimple coupleHan Seon HwaKang SoraKBSKwang HeeLee JoonLeeteukMBCMBLAQMy Husband Got A Family. Julien KangOh Yeon SeoSecretSuper JuniorWe Got MarriedYoon Se AhZE:A
← Previous Story SNSD’s Taeyeon releases ‘Closer’ for drama To The Beautiful You
Next Story → BEAST to appear on ‘Gag Concert’