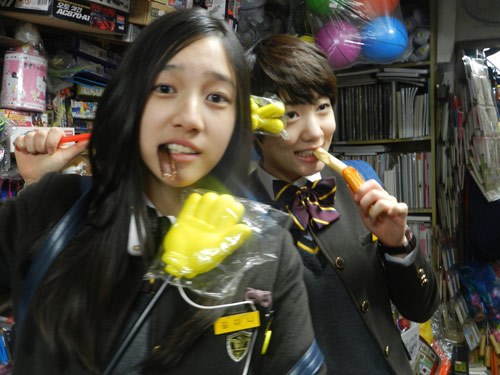 Popular girl group T-ara‘s youngest member Dani and 5DOLLS‘ member Hyoyoung have been caught on a photo titled ‘stationary store terror’. On the photo, Dani and Hyoyoung are at a stationary store, reminding us of the 70s and 80s. Dani has spent quite a long time in the United States so through the new KBS2TV‘s Monday-Tuesday drama series School 2013, she got to wear a school uniform for the first time. In the photo, the two girls recommend two kinds of  junk food.

Hyoyoung transformed into a mischievous student losing the young and cute image she has already shown us. For Dani, it is her first time after debut greeting her fans through a drama as a student. The drama School 2013 is planned to have the following actors along with the two aforementioned girls: Jang Nara, Choi Daniel, Park Se-young, Park Woobin, and others. The first episode will aired on December 3.