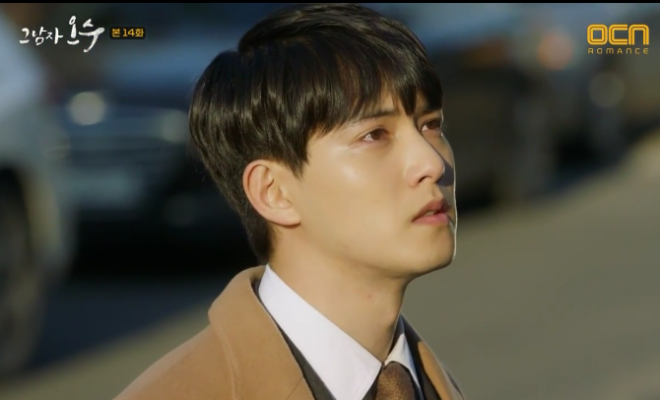 It’s a downbeat moment on the seventh week of That Man Oh Soo with the last conflict spurt hitting the romance of the story.

That Man Oh Soo‘s episode this week felt like a time lapse from when the hobbits in The Lord of the Rings are all happy and dandy, and with just a blink of a magic they get transported to the arduous journey to Mt. Mordor. chuckles

It is the first drama problem that worried me about as I try to exhaust and gamble that Oh Soo and Yoo Ri’s true love will defy everything. 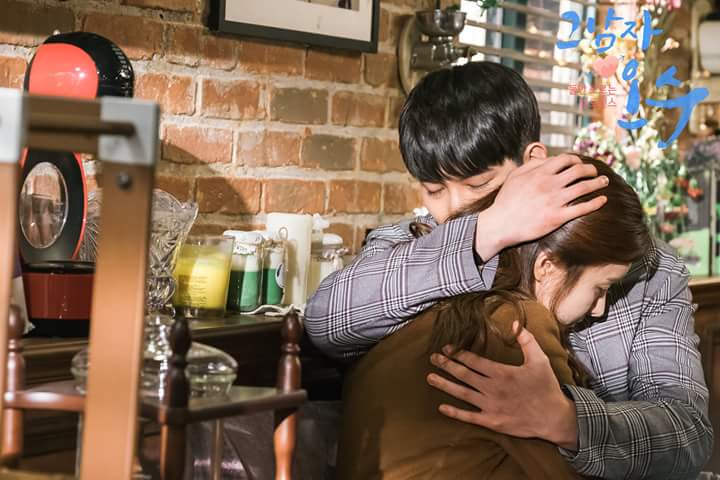 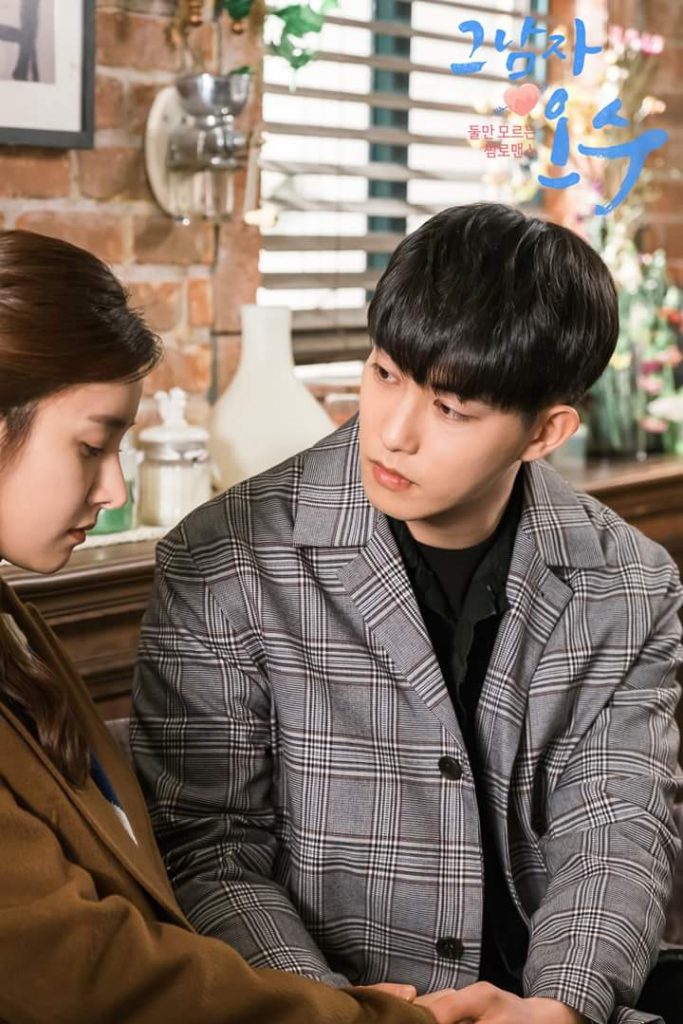 Last week, the hero learned about a crucial mistake he has done that he was not aware about involving the woman he loves. The reality hits his heart breaking it into pieces. 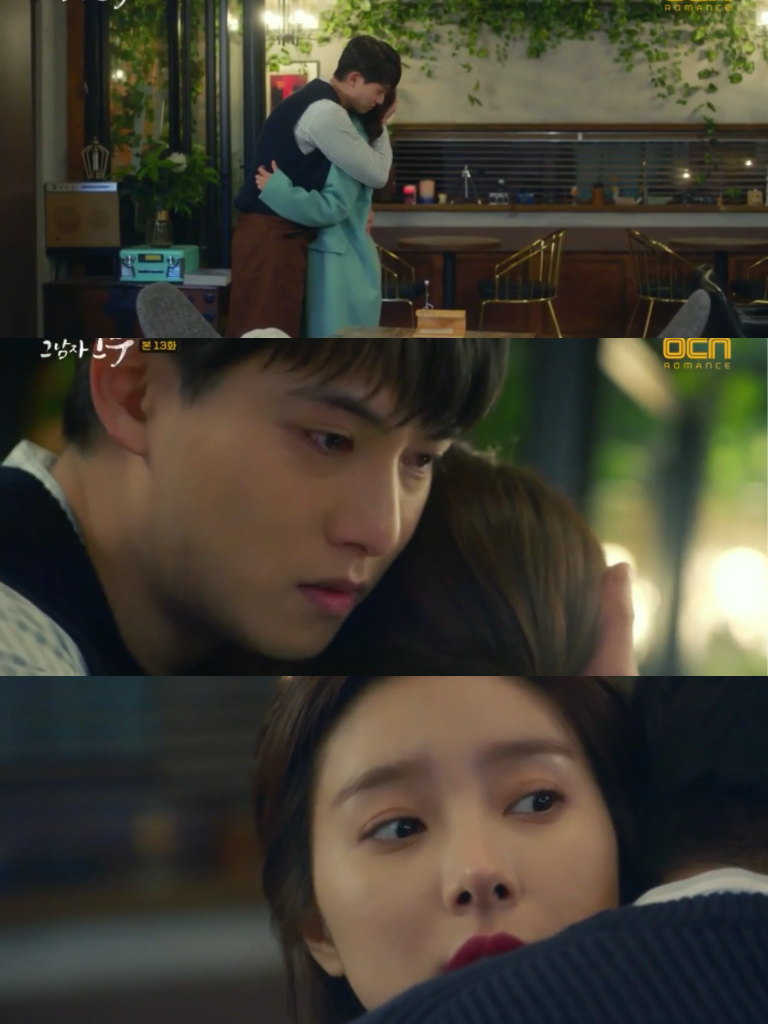 We go back to the time when Oh Soo was young helping out his father in the cafe. The latter stepped out for a bit leaving Oh Soo and a couple in the brink of relationship breakup. The girl failed to drink the coffee Oh Soo’s father prepared so the two did not reconcile.  Curious Oh Soo who wanted to have his parents also make up from a little argument went home to give his mom the coffee prepared by his dad. The result was an irreversible curse that led to his parents’ death. Oh Soo was reminded by his father that in the future he should never make the woman he loves drinks the coffee with the magical beads. 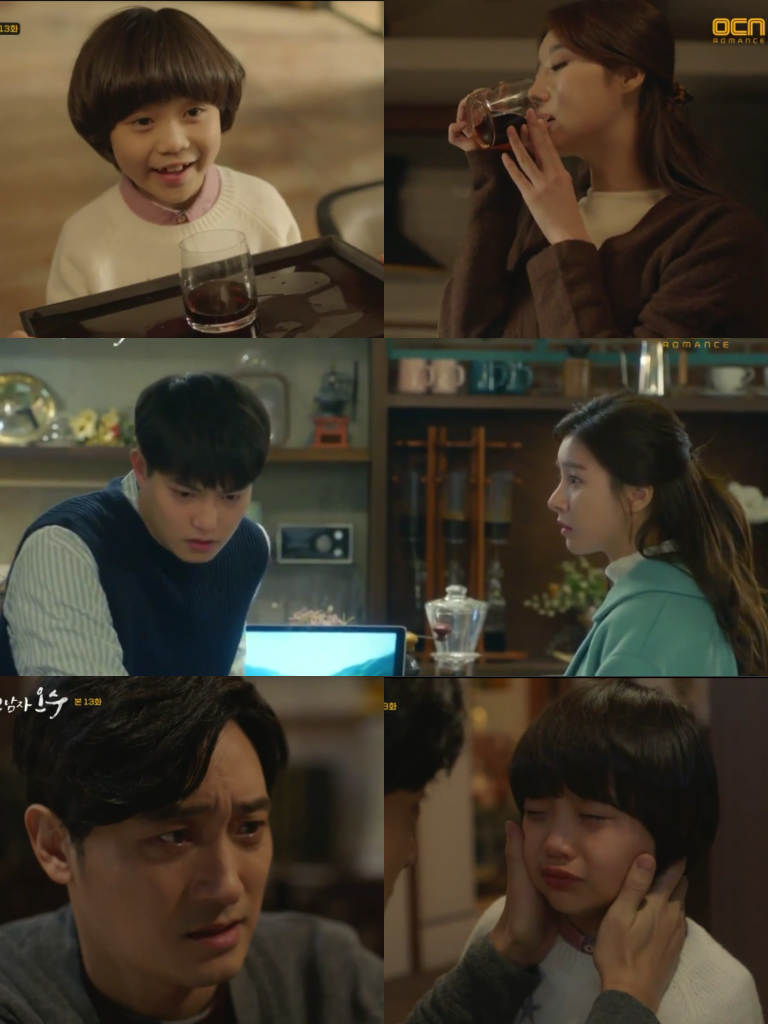 Unaware it is her situation that is causing her boyfriend’s stress, Yoo Ri visits him in their house in trying to make him open up what’s been bugging him. She scoops a quick peck when she asked him to converse with her in Japanese, and he tells her how happy he is to wake up seeing her face. He stares at her as he mutters how he is scared of the fact that he loves her.

Yoo Ri who can understand the foreign language sulks and decides to go home after hearing Oh Soo’s thoughts. Ga Na tries to appease her somber mood by explaining that his brother is adjusting to how his robotic world has changed because of her. 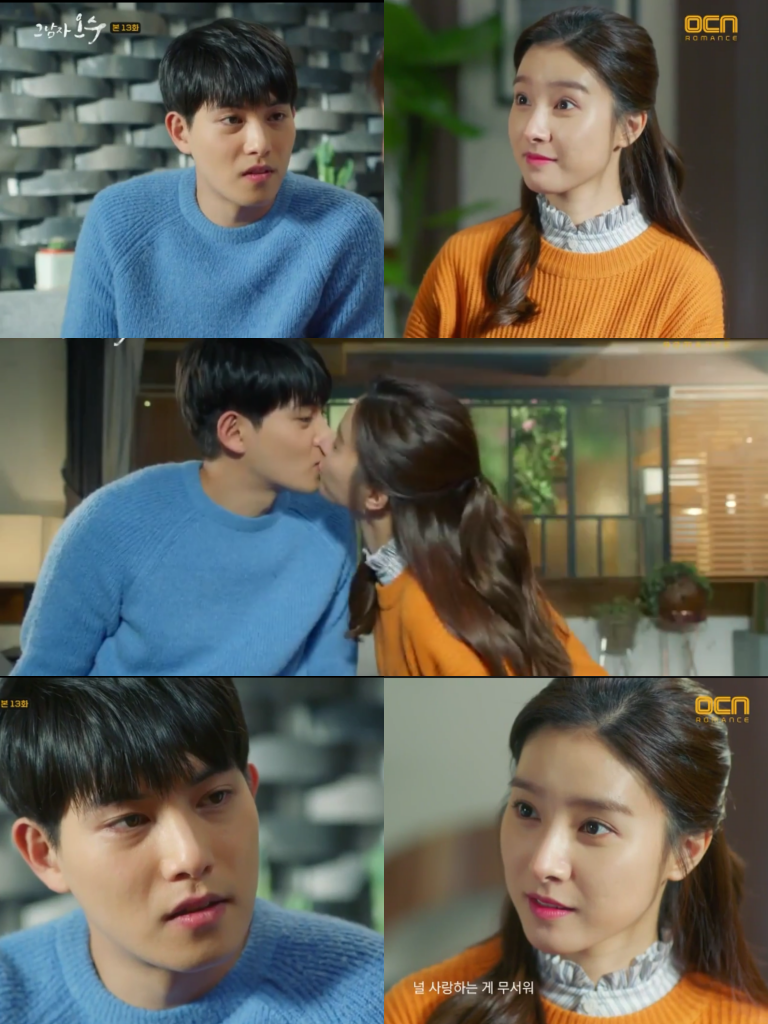 Yoo Ri’s mind has been occupied about the love scare Oh Soo is having so she starts a meeting with neighborhood ajumma to decipher her boyfriend’s thoughts. Ga Na belatedly reports Yoo Ri’s message to his brother.

When Oh Soo asks him about their mom symptoms prior to her passing, Ga Na grasps the situation and warns his brother to break up with her. But he helplessly mutters how he can’t and won’t do it. 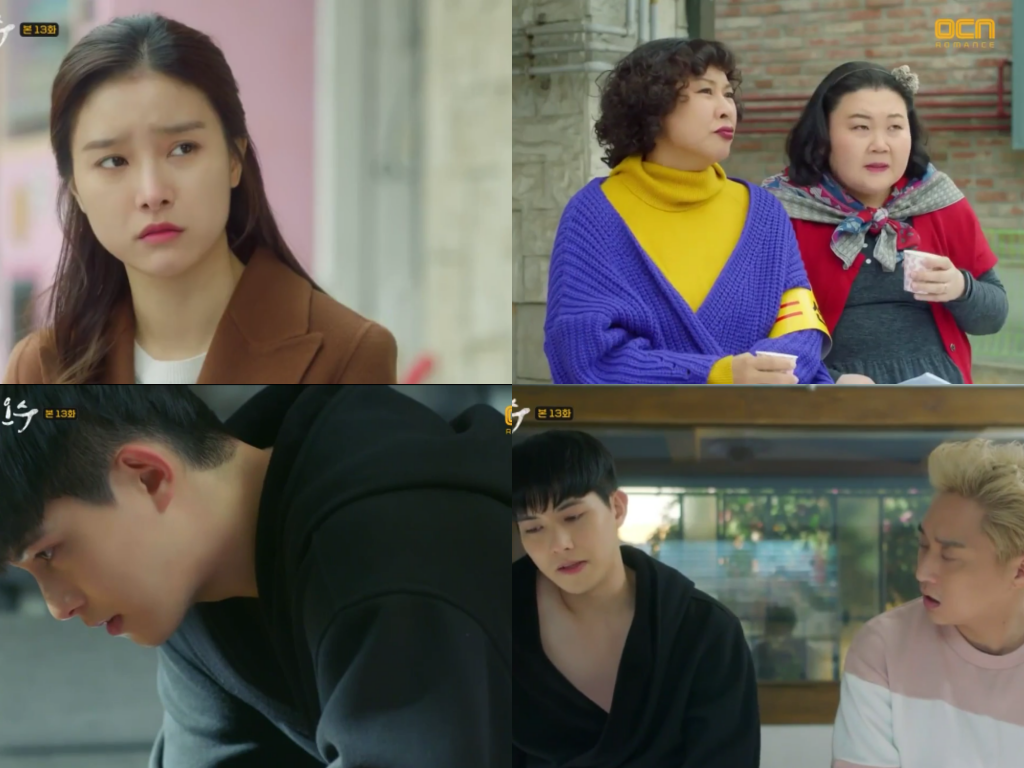 Yoo Ri is joined by the neighborhood ajummas in her quest to analyze the culprit she is investigating on. They order food, which was delivered by the son of the ajumma’s acquaintance. The deliveryman is actually the man that Yoo Ri is looking for.

Yoo Ri steps out to meet Oh Soo and he apologizes for saying that he is scared of loving her. Yoo Ri asks for the reasons cited by the people who gave her advice about the situation with him, making him smile.

Oh Soo opens up about how he has learned that loving someone can lead to pain through his parents. The two make up as Yoo Ri goes home to continue her house meeting with the ajummas. 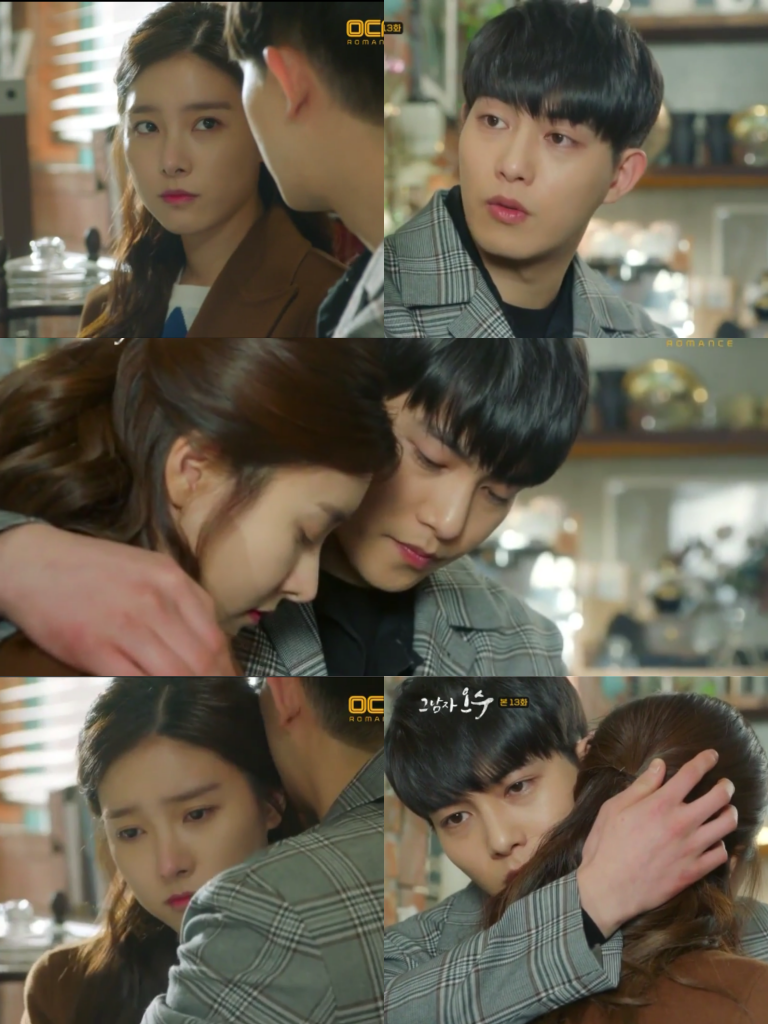 Yoo Ri receives a talisman from the shamaness who joined their black noodle party. Her sister finds a cream left by the deliveryman earlier, and the team deduces that the culprit they are looking for is the same guy. She heads to proceed with the investigation, but a sudden attack of dizziness makes her stop on her track.

Oh Soo learns from ajumma that Yoo Ri has discovered the culprit, and rushes to go where she is. Oh Soo appears at the right moment to protect her from the deliveryman who is about to hit her with his bike. Oh Soo brawls with the villain as the back-up comes in time to bring the psycho to the police station. 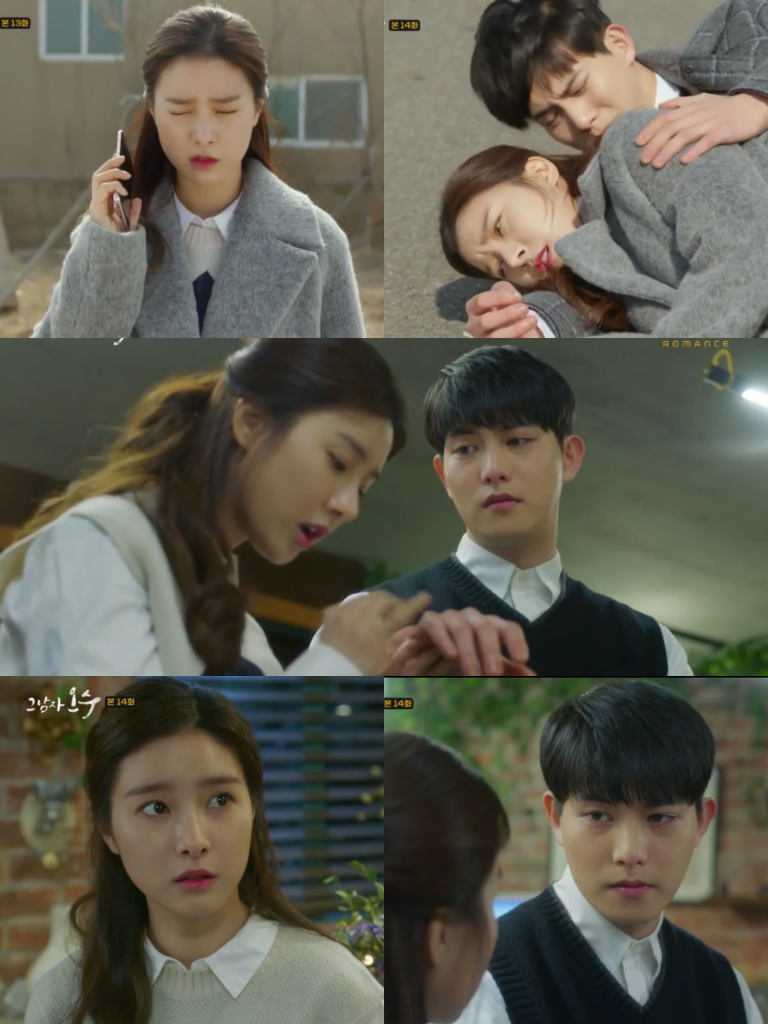 Yoo Ri apologizes for not telling Oh Soo about the case as he gazes at her sadly. He remembers those times when he witnessed her dizzy moments and painfully breaks up with her surprising Yoo Ri. She asks for the reason but Oh Soo can’t bring up their sad situation.

The next day, Oh Soo tells his brother of his plan to stay in Germany for three years. Yoo Ri meets Oh Soo, asking for a definite reason on his decision to separate ways. He is forced to give her a lame excuse of him being tired and purposedly hurt her by saying he does not like her that much so she won’t cling anymore. She tells him if he knows their memories will turn to scars if they break up. But he is resolved to ending their love, unable to explain that it is for her own good. 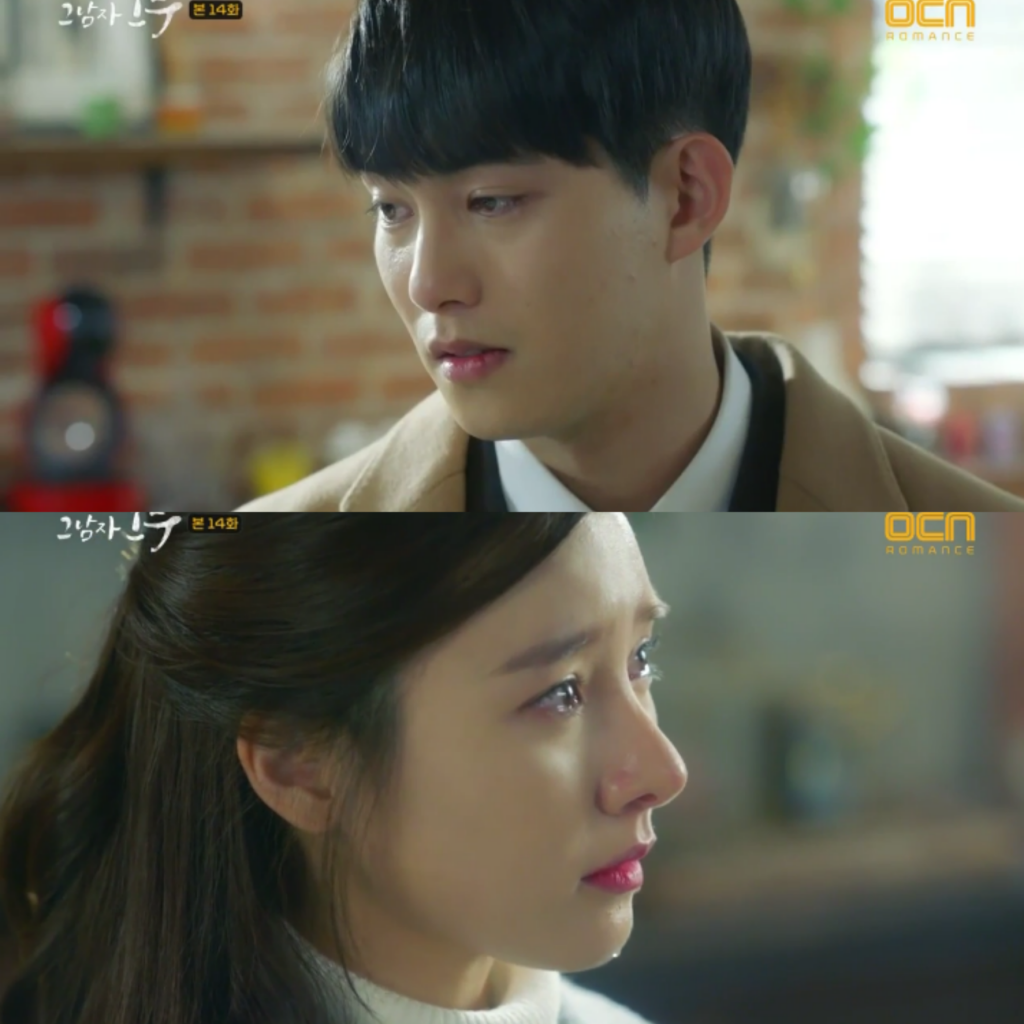 Yoo Ri wallows in heartache after the breakup. Thankfully, the people around her are there to cheer her up. Oh Soo’s grandpa even picks her up for a shopping date, also the ajumma joins her for a drink. She finds herself in the overpass which she walked on with Oh Soo one time, hoping he will come for her if he reads her plea. Instead Jin Woo arrives to shelter her from the cold winter. Oh Soo stops by in front of Yoo Ri’s building and sees Jin Woo coming out. The latter gives him a punch for making the girl they both love cry. 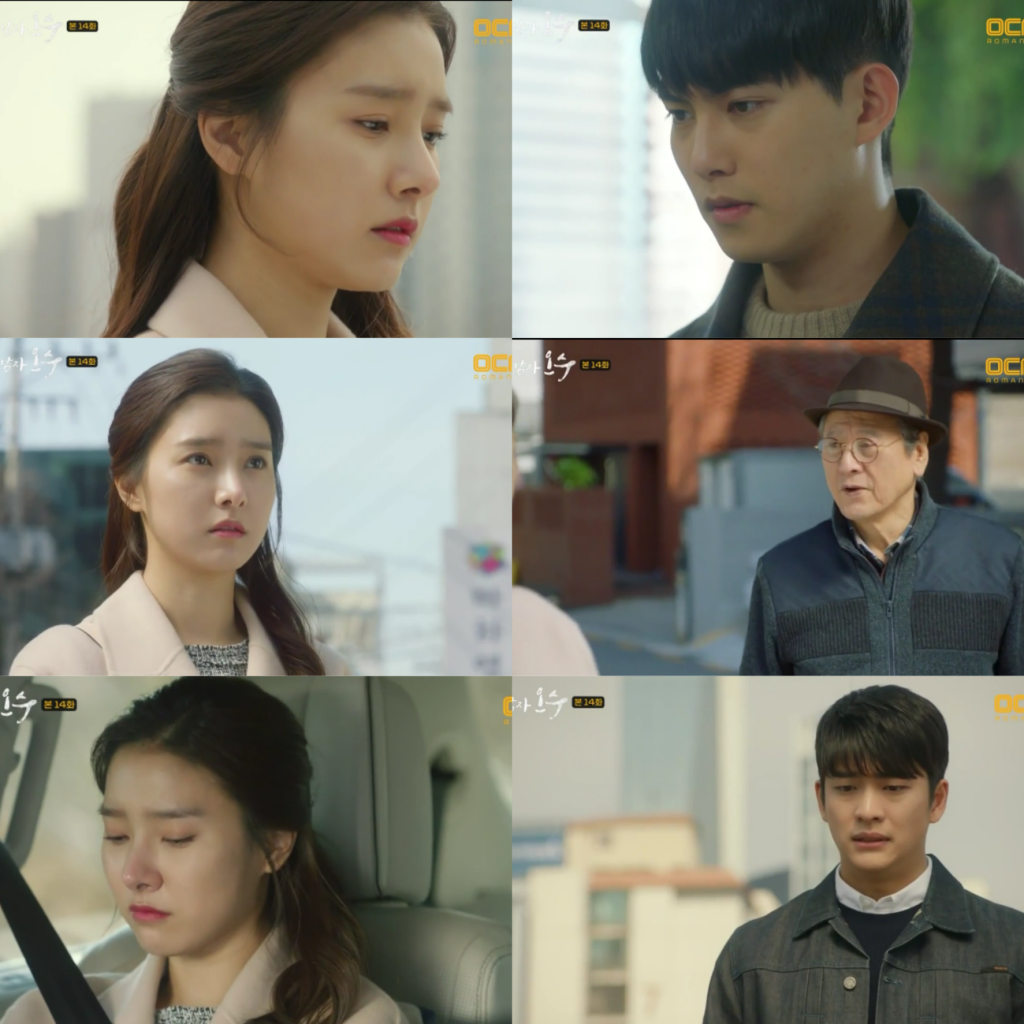 The man who loved

Feeling miserable, Oh Soo gets strength from Yoo Ri’s vending machine and cries painfully. Yoo Ri feels the same love sickness. Her sister keeps on cheering her with food so Yoo Ri becomes suspicious on where she is getting the money for it. It turns out that Oh Soo gives her a credit card and asked her to report anything that might happen to her sister. Yoo Ri goes out to see Oh Soo just in time when he is outside staring and feeling the gloomy tree. 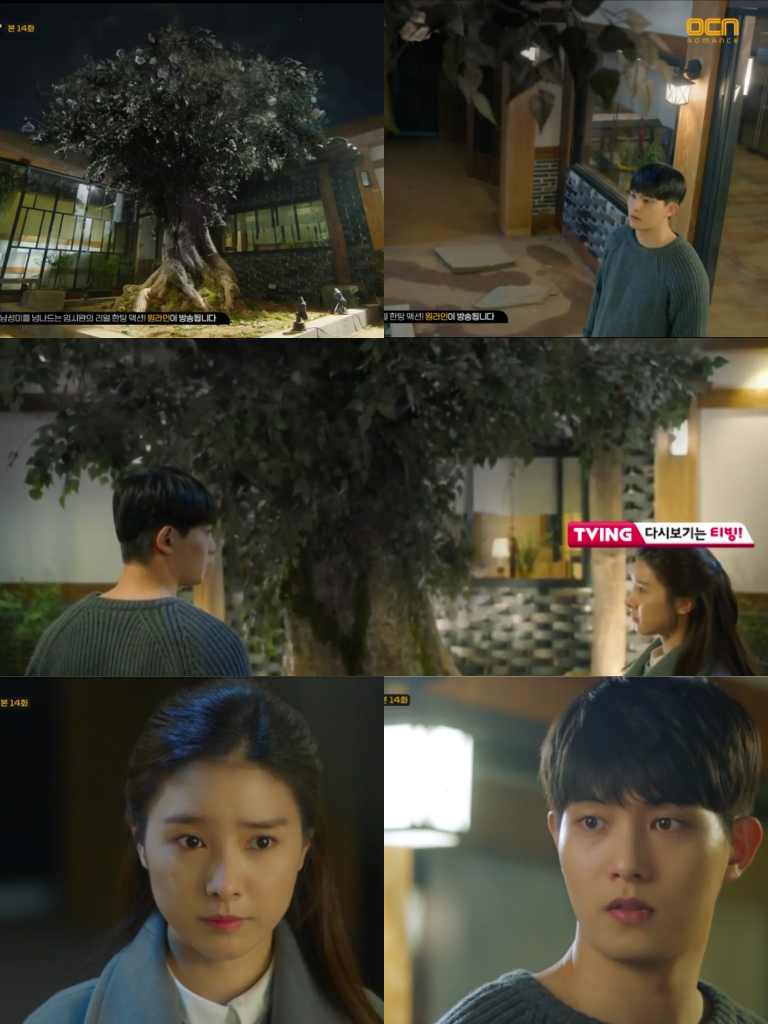 At this point, we don’t know how things will wrap up. We hope the grandpa’s business trip is related to the antidote of the love curse, because we deserve more than an hour of fan service after feeling depressed from what happened this week. 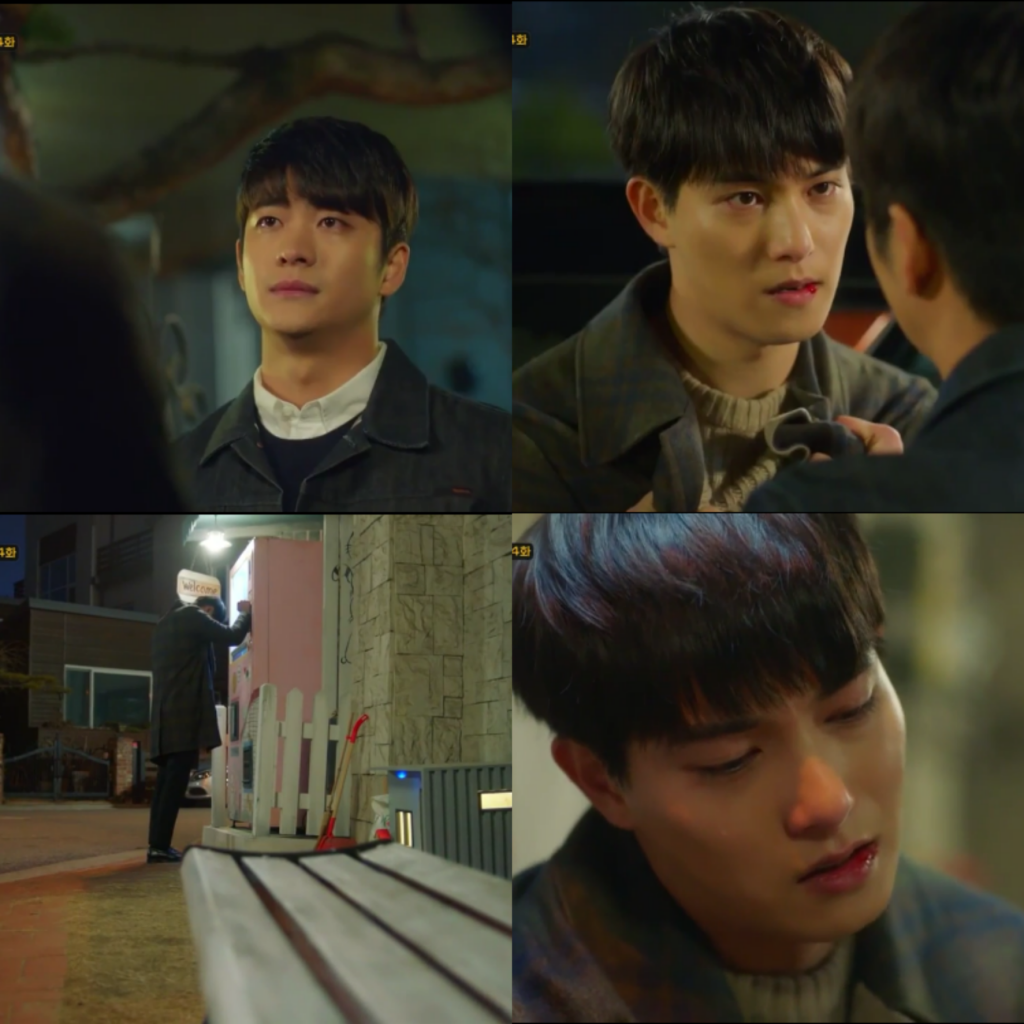 Don’t miss the finale chapters of That Man Oh Soo on April 23 and 24!