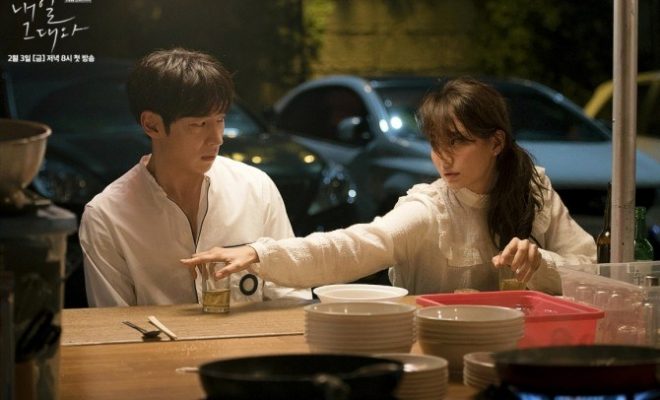 It’s a sad ending for ‘Tomorrow With You’.

tvN’s ‘Tomorrow With You’ did not only fail to surpass the success of its predecessor ‘Goblin’, but it also failed to meet expectations. The Friday-Saturday tvN drama ends its run with lackluster viewership rating.

It is the lowest viewership rating that the broadcasting station ever had for that particular time slot since its 2015 ‘Ex-Girlfriend Club’.

The 16-episode series began with much anticipation as it headlines Shin Min Ah and Lee Je Hoon. The drama marked the first collaboration between the two actors.

It was also Lee’s first attempt in romance-comedy drama, while the actress is known for the same genre. Aside from its stellar leads, the time slot of ‘Tomorrow With You’ was previously occupied by the hit drama ‘Goblin’.

According to Korean media outlets, the poor reception to the drama might be due to the now-worn out time travel fantasy theme.

In an interview with fashion magazine Harper Bazaar, Shin admitted that she had a lot of worries filming the drama. She added she felt pressured as production has concluded before its first broadcast, hence changing the plot according to ratings will never be an option anymore.

The actress played the role of photographer Song Ma Rin. Lee, on the one hand, starred as So Joon. So Joon has the ability to travel through time via the use of a subway.

Hellokpop, as an independent K-pop news site (without influence from any agency or corporation), we need your support! If you have enjoyed our work, consider to support us with a one-time or recurring donation from as low as US$5 to keep our site going! Donate securely below via Stripe, Paypal, Apple Pay or Google Wallet.
141
SHARES
FacebookTwitter
SubscribeGoogleWhatsappPinterestDiggRedditStumbleuponVkWeiboPocketTumblrMailMeneameOdnoklassniki
Related ItemsgoblinLee Je HoonShin Min AhTomorrow With YoutvN
← Previous Story ‘Midnight Runners’ Starring Kang Ha Neul And Park Seo Joon Sold To Six Asian Countries
Next Story → Tickets To Gong Yoo’s Taiwan Fan Meeting Sell Out In Minutes