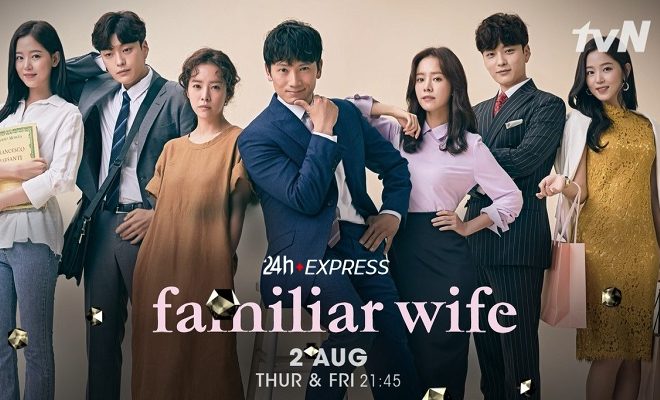 tvN Asia’s latest 24-hour express drama Familiar Wife, starring the stellar cast Ji Sung and Han Ji Min, will premiere exclusively on tvN in Asia from 2 August (Every Thursday and Friday) at 21:45 (GMT+8) in Singapore and Malaysia, and at 20:45 (GMT+7) in Indonesia. This fantasy romantic comedy is written by Yang Hee-seung (Oh My Ghost) and directed by Lee Sang-yeob (Shopping King Louis). Following What’s Wrong With Secretary Kim, tvN continues to impress audience with dramas that are relatable to its audience.

Familiar Wife follows the story of a couple struggling with their five years of marriage. Cha Joo-hyuk (Ji Sung) is an ordinary employee at a bank who has to suppress himself in front of his boss and wife; his wife Seo Woo-jin (Han Ji Min) is a working mum who tries hard to juggle between her job and family. The cruelty of life has swept their good old days and drowned this ever-sweet couple in tediousness. At this critical moment, an unexpected incident gives Joo-hyuk the ability to move back and forth from his past. Familiar Wife draws keen attention to how this ability ultimately impacts his life as the story unfolds.

People has high expectation on the drama regarding the combination of both the production crew and the cast. Writer Yang Hee-seung, who is famous for her previous works such as Oh My Ghost and Weightlifting Fairy Kim Bok-joo, is good at telling romantic comedies with relatable real lives elements.

People are used to taking what they have for granted but feeling nostalgic over the past. Everyone must have once dreamt about undoing one decision and living a completely different life. This drama gives a new definition on the theme ‘what if…’, which can strike a chord with audience.

The chemistry between the main cast also caught audience’s attention. Ji Sung is well-known for his down-to-earth and versatile acting; while Han Ji Min has been focusing on theater performances in the past three years, her return with this drama is surely long-awaited.

This is the first time for the two professional actors to portray a couple.

The perfect on-screen chemistry between Ji Sung and Han Ji Min is beyond expectations. It makes the characters even more convincing. Thanks to their detailed and empathetic acting.

Familiar Wife will broadcast on tvN in Asia from 2 Aug (Every Thursday and Friday) at 21:45 (GMT+8) in Singapore and Malaysia, and at 20:45 (GMT+7) in Indonesia. The drama is paired with English, Chinese, Bahasa Malaysia and Bahasa Indonesia subtitles.

tvN is available in the channels listed below: