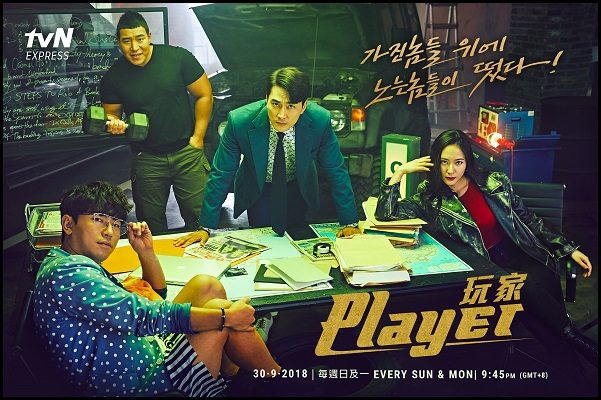 Not quite the same as the usual action dramas with the story of Player from the angle of swindlers.

With the big success of express dramas like What’s Wrong With Secretary Kim and Familiar Wife, tvN expects that Player will continue to impress audience with its thrilling and emotional elements.

Different from typical action dramas which stand on the viewpoint of the police or detectives, Player depicts a riveting story from the angle of swindlers, who are simply ordinary, or you may say not-really-rightful characters. This certainly draws keen attention to the fates of the crew as the story unfolds.

Likewise, Krystal’s first appearance on an action drama surely grabs the audience’s attention. She has expressed her feeling on her first challenge, “I always want to take part in an action drama. Although numerous action scenes in Player require lots of training and practice, other actors and the director are really experienced and caring, so I am well taken care of. The whole filming was exciting and enjoyable.”

It is revealed that Krystal took part in many car chasing scenes, which has transformed her from an elegant pretty lady from previous roles to a “girl crush” fearless driver.

When four people with different backgrounds and distinct characters join forces, what kind of thrilling story will happen from them? Stay tuned to watch out the perfect chemistry of this “Gang of Four”!

Player will broadcast on tvN in Singapore, Malaysia and Indonesia from 30 September (Every Sunday & Monday) at 21:45 (GMT+8), within 24 hours after its broadcast in Korea, available with subtitles in English, Chinese, Bahasa Malaysia and Bahasa Indonesia.

Player is available on tvN via the channels listed below: