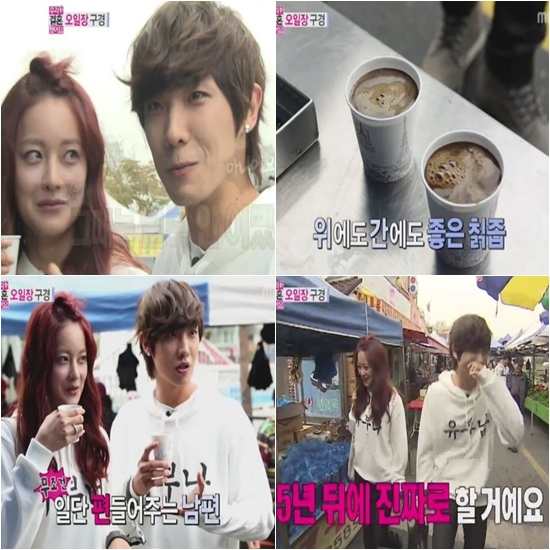 We Got Married Lee Joon and Oh Yeon Seo couple: ‘We will get married in 5 years’

On November 10, whilst filming for MBC‘s We Got Married Season 4, actress Oh Yeon Seo told citizens at the market place, “I’m going to get married in real life in 5 years.”

Alongside virtual husband MBLAQ‘s Lee Joon, the couple cheerfully greeted citizens as they recognized the actress for her role as Malsook in Unexpected You.

The couple were more than thankful of all the support they were getting and decided to eat arrowfoot. The lady who was serving them commented, “You got prettier after you got married. You weren’t as pretty before.”

Lee Joon becoming surprised at this statement, backed Oh Yeon Seo up by saying, “She was already pretty,” and the lady kept jokingly argued that “she wasn’t that pretty before”.

As they walked away from the cart, the citizens asked, “Are you really going to get married?” and Oh YeonSeo unexpectedly replied, “5 years later, we will get married.”

Meanwhile, on the same episode, the couple also bought a baby chick to raise and add to their family.

Hellokpop, as an independent Korean entertainment news website (without influence from any agency or corporation), we need your support! If you have enjoyed our work, consider to support us with a one-time or recurring donation from as low as US$5 to keep our site going! Donate securely below via Stripe, Paypal, Apple Pay or Google Wallet.
22
SHARES
FacebookTwitter
SubscribeGoogleWhatsappPinterestDiggRedditStumbleuponVkWeiboPocketTumblrMailMeneameOdnoklassniki
Related ItemsLee JunOh YeonSeoWe Got MarriedWe Got Married Season 4
← Previous Story Lee Gwangsoo filmed a CF for Pepero Day
Next Story → IU’s first public appearance after photo controversy