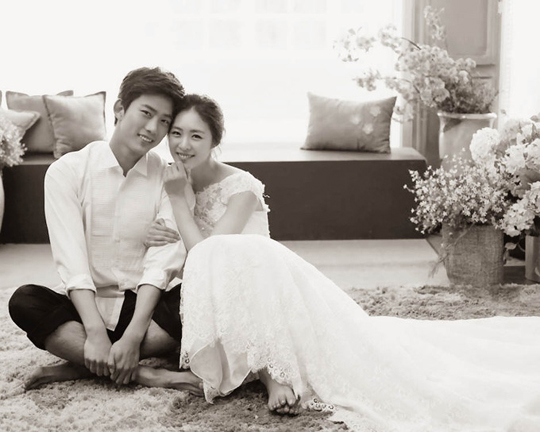 By Aivin | May 9, 2013
FacebookTwitter
SubscribeGoogleWhatsappPinterestDiggRedditStumbleuponVkWeiboPocketTumblrMailMeneameOdnoklassniki

Singer of boy band 2PM, Ok Taecyeon is making his debut on the big screen along with actress Lee Yeon Hee in a romantic comedy movie called The Night before the Wedding.

Their wedding pictorial for the movie has been released and Taecyeon is seen wearing a white shirt with black rolled up slacks while Lee Yeon Hee wears a beautiful lace wedding dress with a long train. The photo was taken in a casual and cosy environment, with natural poses along with warm and affectionate smile portraying a sweet and lovable couple.

Taecyeon will be taking the role of Won Chul, a capable chef and fiancé to So Mi, a nail artist, played by Lee Yeon Hee. The movie will be directed by Hong Ji Young, who made his debut in 2009 with Kitchen. Fans can also anticipate many other famous actors and actresses such as Ko Jun Hee from the TV drama King of the Ambition and Kim Kang Woo from recent the TV drama Lover of Haeundae.